WASHINGTON: Turkey’s foreign minister today said his government now views the conflict between Russia and Ukraine as a “war.” It’s a declaration that has consequences beyond semantics that could lead to the country more strictly limiting Russia’s access to the Black Sea, depending on how Turkey plays a delicate geopolitical hand.

“Is this a conflict or a war? We decided on that. Article 19 of the Montreux Convention is very clear. This is a war,” the country’s foreign minister’s Dışişleri Bakanı Çavuşoğlu said in a live interview to CNN Turk.

The Montreux Convention dates back to 1936 and is an international agreement that gave Turkey exclusive control over the only canals in and out of the Black Sea, a body of water to Turkey’s north with extensive coastlines in both southern Russia and southern Ukraine.

“If a war exists but Turkey is not a party to it, Article 19 of the Montreux Convention requires Turkey to close the strait to warships of all belligerent states,” Cornell Overfield, an expert at the Center for Naval Analyses told Breaking Defense earlier this week. CNA is a federally-funded research and development center that also provides advice directly to the Pentagon. 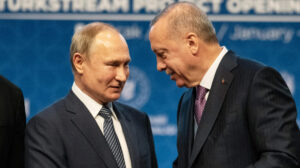 Although Ankara has publicly voiced opposition to Russia’s invasion of Ukraine, it had not yet signaled a willingness to assert the powers given to it under the Montreux Convention. The country also reiterated that it was unable to block a ship from returning to its homeport.

Joshua Tallis, also a naval expert at CNA, told Breaking Defense that Russia’s invasion of Ukraine has put Ankara in a difficult position.

“Turkey finds itself at the center of two divergent instincts among Ukraine’s friends, which simultaneously want to help Ukraine however possible while also avoiding triggering an escalation that involves NATO,” he said. Turkey has been a member of NATO since 1952, recently with some controversy related to its own relationship with Russia.

Preserving the special powers Ankara holds under Article 19 is likely top of mind for Turkish officials, Tallis added, and they would be hesitant to do something that might cause Russia to retaliate, like by denouncing the convention.

Still, Overfield noted, it would not necessarily be in Russia’s best interest to spoil the Montreux Convention. As a country with a border on the Black Sea, Russia enjoys special privileges not granted to other countries.

“Russia is arguably the prime beneficiary of the Montreux regime: without Montreux, UNCLOS rules on transit passage would apply to the Straits and all warships would have unrestricted access to the Black Sea,” said Overfield, referring to the United Nation’s major international pact governing maritime behaviors.

RELATED: The fight for UNCLOS is back with the Indo-Pacific in mind

As of press time, it’s not clear what practical limits Turkey may set, and the moves could be more symbolic than not. Much of Russia’s fleet has already entered the Black Sea, with the exception of several vessels operating in the Mediterranean, USNI News reported.

“Turkey has a long record of successful and effective implementation of the Montreux Convention, and we are confident Turkey will implement it will appropriately,” a State Department spokesperson told Breaking Defense on Thursday.

“We will continue to engage with Turkey and our other Allies on how best to address Russia’s efforts to undermine the rules based international order. We refer you to Turkey for any other specific questions,” the spokesperson continued. The Turkish embassy in Washington, DC is closed for the weekend.