What had been a simmering concern about Russia’s intentions with Ukraine exploded in the last week, with reports that Moscow is planning a full-scale invasion mixing with statements of concern from top US officials. Ahead of a call between US President Joe Biden and Russian leader Vladimir Putin, this op-ed from Mark Cancian of the Center for Strategic and International Studies takes a hard look at the costs of protecting Kyev’s autonomy.

As Russia moves forces to the borders of Ukraine, voices in the United States and Europe are calling for their governments to help the Ukrainians defend themselves. Most of these commentators limit their recommendations to training and equipment support, but some would extend a security guarantee to Ukraine, even making it a member of NATO.

A recent study by the Center for Strategic and International Studies analyzed what it would take to defend Ukraine, recognizing the country is far from the European centers of military power, has open and difficult to defend territory, and faces Russia’s advantage of interior supply lines. The answer: tens of billions of dollars for supplies and additional forces.

Defending Ukraine is a challenge in the best of cases. The largest country in Europe by area, it shares a 1,400-mile border with Russia, and the eastern half facing Russia lacks any natural defenses until the Dnipro River at the Ukrainian capital of Kyiv. Another challenge is the state of Ukraine’s military; forces are battle-hardened and have grown to about 300,000 troops through conscription, but a lack of equipment and personnel limits further expansion. And while Ukrainians are determined to defend their homeland, the separatist militias reinforced by Russian troops defeated them during major combat in 2014.

The Russians, by contrast, have modernized their armed forces and greatly increased unit readiness. These are not the low readiness cadre forces so common during the era of the Soviet Union. These forces have training, personnel fill, and equipment availability comparable to NATO forces. The Russians have the advantage of interior lines and an excellent railroad system whereby units can rapidly mass at designated spots. Mitigating these advantages is the fact that the forces are much smaller than during the period of the Soviet Union, and conscripts, about one-third of the force, cannot be used in foreign conflicts.

US allies, particularly NATO, have large and powerful forces on paper, but their ability to deploy East is limited. Only the United Kingdom and France have built the logistics and mobility structure to deploy forces far from their shores. The German military, potentially the strongest in Europe, is at such low readiness that it requires months, even years, to deploy significant combat forces. Others, like the Poles, would likely be willing to help, but their ability to deploy is limited – and they are already preoccupied with the Belarussian-forced migration crisis on their border.

Some strategists might be tempted to extend the US nuclear umbrella to Ukraine as a way of deterring Russia without the cost of large conventional forces. However, it is no longer the 1950s when the United States had nuclear superiority and could credibly make such a threat. Claiming that the United States would risk Washington to defeat a Russian conventional attack in Ukraine stretches credibility, given Russia’s nuclear capabilities. In any event, it would be extremely dangerous.

Given the low levels of allied military spending, most, though not all, costs for defending Ukraine would fall on the United States. Here are two strategies US planners might employ.

One approach would be to station a small multinational force in Ukraine with the goal that their presence would deter Russia. This approach would be relatively low cost in peacetime and not a major change from what the United States and NATO are doing already. If conflict should occur, the forces would withdraw, await reinforcement, and eventually launch a counteroffensive. It would constitute a classic deterrence by punishment approach.

The forward-deployed peacetime force would consist of the forward elements of a division headquarters, a security force assistance brigade (SFAB), and some NATO advisers and trainers. The United States and its allies would continue providing logistical and equipment support to the Ukrainian armed forces. One-time costs of such a defense would be about $850 million, mostly for infrastructure improvements to facilitate rapid reinforcement, and about $1 billion a year for the additional forces and exercises. European allies would spend an additional $150 million a year.

Such a force would resemble NATO’s defense of Berlin during the Cold War. During that period, the US and NATO allies stationed several brigades in the city, which was deep inside communist East Germany and surrounded by Warsaw Pact forces. The Soviet Union and its allies could capture the city any time they wanted but would need to kill thousands of NATO soldiers to do it. That was enough to deter the Soviets from direct military action. 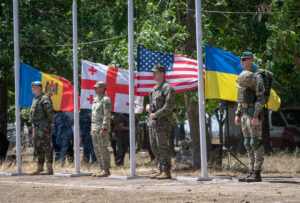 The problem arises if deterrence fails. In 2020, RAND conducted a wargame of such a minimalist approach. During the conflict, the United States moved its three European brigades into Ukraine, but the Europeans had few forces ready to deploy quickly. The United Kingdom and France deployed some aircraft and small ground forces. Poland sent a brigade. NATO’s air power could get into the fight early and punish Russian forces but could not stop their advance. The Ukrainians pulled back to the Dnipro River line to avoid being encircled.

The Russians were able to achieve their objectives of establishing a land bridge to Crimea and surrounding the city of Kharkiv, though they did not try to overrun the entire country. NATO built a counteroffensive force over three months, during which Russian forces dug in. The counteroffensive force eventually included all available US active-duty heavy brigades, much of the Air Force’s fifth-generation tactical aviation, and some NATO forces. It was not clear whether NATO’s logistical structure could sustain this counteroffensive. It was also unclear whether the United States and its allies had the political will for such a long and potentially bloody campaign.

If the risks of a minimum deterrence approach are too great, then the United States and its allies would need to station enough capability inside Ukraine to hold forward until reinforcements arrived. This deterrence by denial strategy would be less risky in wartime but much more costly in peacetime.

One-time costs to the United States would be $27 billion for infrastructure and equipment and $11 billion annually for exercises and the expanded US force structure required to sustain these forward deployments — a massive investment that would require immense political will from Washington at a time when the American public is leery of sending forces overseas.  US allies would face costs of about $6 billion in one-time costs and $2 billion per year, costs which they would find politically difficult to sustain.

There are good reasons for defending Ukraine. It is an independent country threatened by external forces. It is struggling to be democratic and Western-oriented. It is a symbol of resistance to aggression.

However, the fiscal, political, and military costs of defending Ukraine would be large and unavoidable. Given the size and immediacy of the threat, a security guarantee to Ukraine would arguably constitute the largest US political-military commitment since the creation of NATO. It deserves careful analysis and deliberation before moving forward.

Mark Cancian, a member of the Breaking Defense Board of Contributors, is a retired Marine colonel now with the Center for Strategic and International Studies.