A Marine Corps CH-53K King Stallion lifts a Navy MH-60S Knighthawk Helicopter from a draw in Mount Hogue, California, Sept. 5, 2021. The Knighthawk conducted a hard landing during a search-and-rescue mission, which resulted in no casualties or injuries of its crew. The two day operation was the first official fleet mission for the CH-53K King Stallion, as it is currently undergoing an operational assessment while the Marine Corps modernizes and prepares to respond globally to emerging crises or contingencies. (U.S. Marine Corps photo by Cpl. Therese Edwards)

Correction: This report was updated 10/21/21 at 5:20 PM et to reflect the Marine Corps’ original goal to declare the initial operational capability for the CH-53K was September 2015.

WASHINGTON: The Marine Corps’ heavy-lift helicopter program has been through its share of ups and downs in recent years, from several negative testing reports to multiple scheduling delays. But last month, it scored a major win when the squadron tasked with putting the aircraft through its paces, VMX-1, used it for a real-world operational mission.

What made the mission’s success noteworthy though is that the CH-53K is still in initial operational test and evaluation — in other words, the service is still evaluating the aircraft to make sure it’s fit for purpose before green-lighting it for widespread use.

“This lift was made possible by planners at all levels in VMX-1, 1st Landing Support Battalion (LSB), NAS Fallon Maintenance and their Search and Rescue Team, as well as PMA-261,” Col. Byron Sullivan, the commanding officer of VMX-1, said in an Oct. 12 service statement.

After its success during the unexpected September operation, Breaking Defense thought the CH-53K King Stallion, along with some of its developmental issues, was worth a closer look. 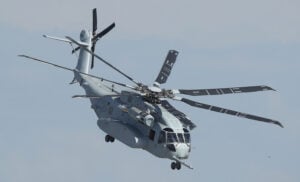 Designed and built by Sikorsky, the rotorcraft-focused Lockheed Martin subsidiary, the King Stallion is the Marine Corps’ program of record for a new heavy-lift helicopter that can carry up to 27,000 pounds, a major upgrade from the legacy CH-53E Super Stallion.

Its purpose and importance to the Marine Corps is simple: It’s designed to transport anything and everything where ever it needs to go, whether it be weapons, equipment, supplies, troops or — in the September case — a damaged aircraft in need of recovery.

“The CH-53K is a new-build, fly-by-wire, dual-piloted, three-engine, heavy-lift helicopter… [capable of traveling] over a distance of up to 110 nautical miles, climbing from sea level at 103 degrees Fahrenheit to 3,000 feet above mean sea level at 91.5 degrees Fahrenheit,” according to the Pentagon’s chief weapons tester.

The Marine Corps plans on buying approximately 200 operational aircraft as well as a handful of test articles. According to the service’s latest budget documents, the Pentagon has spent $1.2 billion in past years developing the King Stallion and is seeking another $256 million in the fiscal year 2022 budget request.

Additionally, Sikorsky says it plans to produce at least another 100 CH-53Ks for international sales. The State Department in July cleared at least 18 of those to go to Israel, and Germany is actively considering buying 40 for its replacement program. Sikorsky’s president, Paul Lemmo, said the company is in active discussion with at least three other unnamed nations as potential customers.

“Any other heavy-lift helicopter in the US inventory — that includes the [Boeing CH-47] Chinook — you’d have to break that helicopter apart to get it out,” Lemmo told a group of reporters about the September mission last week during the annual Association of the United States (AUSA) exposition.

But both the service and company have been fighting headwinds since 2018 when the first aircraft was delivered. The Marine Corps originally planned on the King Stallion getting its initial green light for fielding in September 2015. Now, several years on from that date, and the service is still working through the final hurdles before reaching what the Pentagon calls “initial operational capability.”

Pentagon testing reports discuss issues such as some materials delaminating during flight, and dampers, a part of the aircraft designed to reduce vibration, experiencing “load spikes” due to certain design characteristics. Other issues have also arisen from the wheel brakes’ design and problems in the flight control software that could have led to pilots losing control.

One issue that got a lot of attention in late 2019 was the helicopter’s engine re-ingesting its own exhaust, a problem the Navy considered a “significant technical deficiency.”

To Sikorsky and the Marine Corps’ credit, these issues have been resolved, according to the testing reports, but they illustrate why the King Stallion remains in a developmental phase two years past the original plan.

Lemmo, Sikorsky’s chief, told reporters the CH-53K is the first aircraft that was “born in a digital environment” and that has gone a long way to improving the learning curves in production. He said improvements in production that the company would normally see by the 100th aircraft are now understood by the 20th.

Lemmo also said the advances in digital modeling helped them solve the engine re-ingestion issues much quicker than they otherwise would have.

Sikorsky currently holds a Pentagon contract for performance-based logistics for the Navy’s CH-53E fleet, which has them providing the Navy’s maintenance centers certain data analytics and aircraft components. A company spokeswoman told Breaking Defense this week that Sikorsky anticipates in 2023 the Pentagon will renew that contract and begin similar support for CH-53K, which last up to seven years.