DUBAI: Ravaged by 110 percent inflation, the Lebanese military has run out of money to feed its troops and troops salaries have plunged in value to the point where they are no longer enough to cover the cost of living.

The dire conditions prompted LAF commander Gen. Joseph Aoun to ask global powers, friends and allies for help. He spoke with senior U.S. military and government officials in virtual meetings early last May. He later flew to Paris to meet with senior defense officials and President Manuel Macron in a rare move that reflects the severity of the situation in Lebanon.

In response to these overtures, the United States and its Western and Arab allies are scrambling to boost aid to the Lebanese Armed Forces (LAF). How bad are things? A captain in the LAF’s monthly salary has shrunk from about $2,340 at end of 2019 to $270 at end of May 2021, leaving him and his colleagues unable to pay for food, housing and other essentials.

There’s little prospect of this getting fixed any time soon since Lebanese political parties are paralyzed and can’t form a new government, further undermining the country’s financial and economic systems.

“The collapse of the central government, which would certainly impact the LAF, would leave the borders wide open for refugees and terrorists to move in and out towards Europe,” said Khalil Helou, a retired Lebanese brigadier general and defense analyst. “So, now, countries seeking to assist the LAF are not only focusing on supplying arms and equipment, but also food and medical supplies to keep the military establishment functional.”

Military transporters carrying food and medical supplies to the 84,000-strong LAF have been making frequent flights to Beirut from Arab and Western capitals, including the UAE, Egypt, Oman, France, the US and Jordan.

“For the US, Lebanon is a unique case where a national military has improved almost at an inverse rate to the central government in a fragile state,” said Aram Nerguizian, an expert at the Center for Strategic and International Studies in Washington.

Nerguizian pointed out that the U.S. sees a distinction between the professional LAF and the largely corrupt Lebanese government which is why it remains actively working with the military to maintain its role as a stabilizing factor and to fend off any efforts by Lebanese to degrade the military establishment in an attempt to control it, and possibly make it fall under the hegemony of players such as Russia and Iran.

French officials announced May 27 they will organize an international conference to support the LAF this summer. “The sort of support we expect to address the impact of the socio-economic conditions on the LAF,” said Helou who pointed out that “the general concern now is about how to ensure that the regular troops and officers have sufficient salaries that enable them to feed their families, in order to remain efficient and obedient to the chain of command and perform their duties.”

Local Lebanese news outlets have reported cases of desertions within the military by troops seeking better livelihood inside and outside the country. However, these reports were never verified and were denied by the LAF. “International donors could even consider donating cash to enable the LAF to raise wages, or offer its member subsidized products such as gas, food and health services,” said Helou.

“From an LAF perspective, it is clear that it owes far more to the US than to any internal force or faction for its continued stability,” added Nerguizian. According to the US Embassy in Beirut, since 2006, the United States has provided more than $2.5 billion in military grant aid to Lebanon.

U.S. Ambassador in Lebanon Dorothy Shea said May 28  that “the U.S. Department of State announced the intended transfer of $120 million in Foreign Military Financing for Fiscal Year 2021. This military grant assistance will provide the Lebanese Armed Forces with critical defense systems, services, and training. This award marks a $15 million increase over prior-year levels.”

“In addition, the U.S. Department of Defense announced that it will donate three U.S. Coast Guard Protector-class patrol boats to the Lebanese Navy next year. These (27-meter long) boats will greatly strengthen Lebanon’s maritime patrol capabilities. Lastly, the Department of Defense initiated the transfer of $59 million in Section 1226 funding to the Lebanese Armed Forces, which will be used primarily to strengthen the army’s border security capabilities along the eastern border,” Shea said.

The ambassador spoke at the conclusion of a 9-day-long joint Lebanese-U.S.-Jordanian naval exercises off the Lebanese coast. “This was the 21st iteration of Resolute Union and the first time we’ve conducted Resolute Union as a multilateral exercise with three participating militaries,” Shea said. The ceremony was attended by Rear Adm. Curtis Renshaw, deputy commander of U.S. Naval Forces, Central Command.

Although emphasizing the naval component within the newly announced U.S. military aid was noteworthy to many observers, others saw it as part of an already set plan.

“The U.S. decision to grant the Lebanese naval forces three patrol vessels is in line with the Lebanese Naval Forces development plan that was laid out by the Lebanese military command few years ago and presented to the U.S. military,” the former commander of the Lebanese Navy, retired Rear Adm. Nazih Baroudi, said.

“This interest in naval capabilities is by no means sudden,” Nerguizian noted, saying that the fact the Maritime Task Force of the United Nations Interim Force in Lebanon (UNIFL) has reduced the number of its vessels operating off the coast has made it more pressing to increase Lebanon’s own maritime capabilities.

UNIFL has been deployed in south Lebanon since 1978 to police the area along Israel’s northern borders. A Maritime Task Force was added to it in 2006 to patrol the coastline and prevent weapons smuggling. The U.S. is currently trying to broker talks between Lebanon and Israel to demarcate the maritime borders to enable both to start excavating for gas and oil that supposedly exist in large quantities in the eastern Mediterranean basin.

“Even a clear agreement between Israel and Lebanon will mean that Lebanon should have some additional ability to do SAR (search and rescue) and interdict in the maritime domain, especially if offshore exploration is to become a reality,” said Nerguizian. “The counter-terrorism and counter-migration dimensions to this are at best anciliary, but having those capabilities certainly helps the LAF in terms of managing both expectations and optics of partners in Europe, to say nothing of the US and other allies.”

The Lebanese Navy has received a 44-meter Lebanese Coastal Security Craft (LCSC-42) under the U.S. military aid program, built by Riverhawk in Tampa, Fla. Over the past 25 years, the French, British, German and UAE navies have all donated patrol boats to the Lebanese Navy, which now operates seven patrol boast that are between 20 and 34 meters long, in addition to the LCSC-42, and a dozen fast interceptor boats less than 20-meters long, two 59-meter landing crafts, and 45 small multi-purpose support boats. 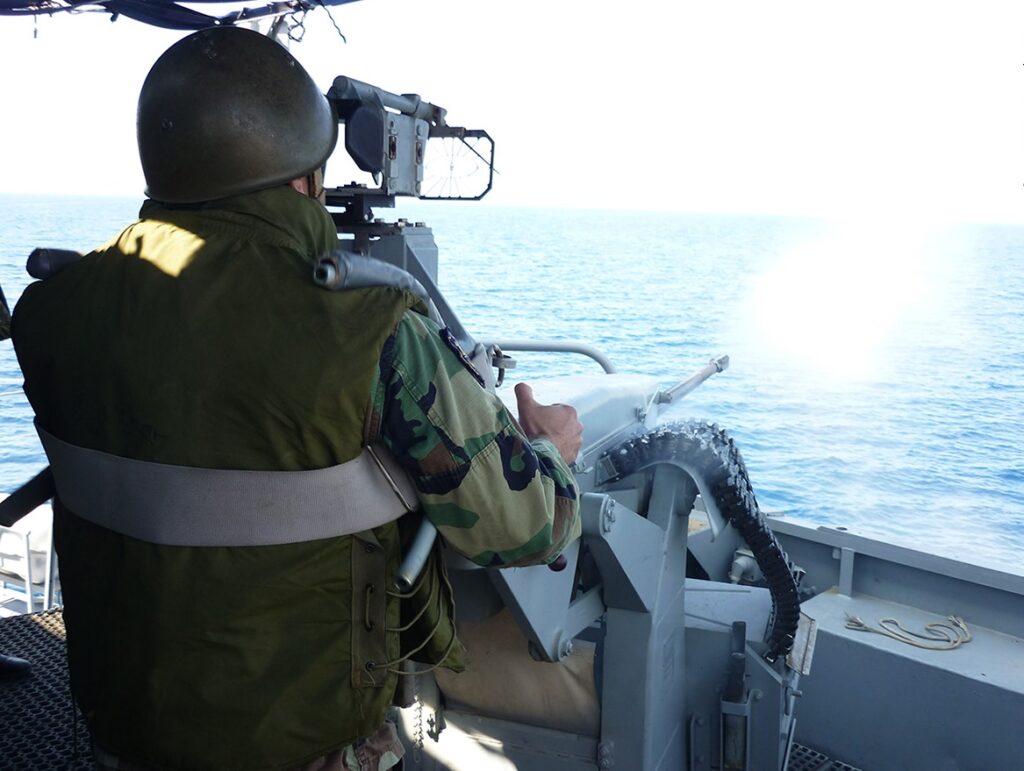 Lebanon hosts more than one million Syrian refugees and about 300,000 Palestinian refugees that live in worsened socio-economic and security conditions. The country faces tough challenges in preventing additional Syrian refugees escaping civil war in their country from moving in or using its coastline to escape towards Europe.