A handout picture provided by the Iranian Army’s official website on September 11, 2020, shows an Iranian Simorgh drone during the second day of a military exercise in the Gulf, near the strategic strait of Hormuz in southern Iran. (Photo by Iranian Army office/AFP via Getty Images)

WASHINGTON: Over the past few years, Iran has “significantly” increased its use of unmanned aerial vehicles, the US Navy’s 5th Fleet Commander said today.

Vice Adm. Brad Cooper said that unsafe naval encounters with the Iranian military remain relatively flat, but, “what is different, though, is a dramatic uptick in the UAV activity in the region, both in terms of their capability, their profiles and the density of activity.”

“It is significantly different,” he said during an event hosted by the Center for Strategic and International Studies

One recent example, Cooper said, was the attack on the Israeli merchant vessel Mercer Street in July, where an Iranian-made kamikaze drone struck the ship by flying into it, resulting in the deaths of two people.

In November Breaking Defense reported that in response to the escalating drone use by Iran, the US and Israel have stepped up operations against Iran’s drone industry.

“This is not a new front, but now the actions will be more frequent and more aggressive,” an Israeli defense source told Breaking Defense then, shortly after Israel launched a military strike in Syria to destroy what the source described as delivery of drone and air defense systems.

On the US side, Cooper said today the US 5th Fleet has also ramped up its own use of maritime drones, unmanned surface vessels and unmanned underwater vehicles over the past several months, standing up Task Force 59 in September to help speed up its integration of unmanned tech.

So far, the task force has focused on integrating its existing aerial drones with new off-the-shelf USVs owned and operated by industry, he said.

In September, the task force established a hub in Bahrain that has been operating MARTAC’s Mantas T12 USV. In November, it announced the creation of a second hub in Jordan focused on operating the Saildrone USV. 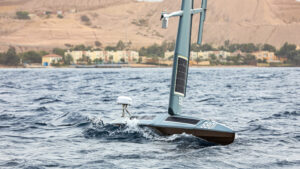 “The pace that we’ve been able to move at is going to result in, I imagine, us validating about 14 different [concepts of operation] — unimaginable a few months ago — and then shifting into a more operational mode in the future,” Cooper said.

“The drones that we have operating at Aqaba, [Jordan,] have been at sea for 33 straight days,” he said. “They’re really redefining what persistence means in the maritime environment.”