THAAD is just one of the parts of the Missile Defense Agency’s arsenal. (MDA)

It’s beyond time for missile defense to get a major cash infusion. The numbers are simple: the fiscal 2008 MDA budget request to Congress was $8.9 billion, the same amount Vice Adm. Jon Hill, the current head of the agency, has said is necessary to fulfil his mission set. No question comparing budgets today to twenty years ago isn’t apples to apples; some programs that were nascent in 2008 have matured, while others that were priorities then are no longer part on the roster of programs to be studied. But when accounting for inflation, MDA’s budget has actually decreased.

Putting an exact figure that is needed is hard, but a rough calculation shows adding roughly $4 billion to the MDA annual budget, bringing the total to approximately $13 billion, would be appropriate.

Yes, defense budgets are expected to be flat or decrease in the coming years. But a combination of growing adversary capabilities and self-inflicted wounds — thanks to years of slow R&D, acquisition setbacks and low funding levels — means an extra $4 billion per year for MDA is necessary.

How did we get here?

Despite the Trump administration’s stated ambitions for missile defense in the form of President Trump’s speech at the Missile Defense Review’s (MDR) roll-out, and the content of the MDR itself, missile defense under the last administration was mostly stagnant. Programs intended to improve upon promising technology for boost phase defense were cancelled shortly after officials introduced the concepts. And homeland defense was stunted due to the cancellation of the Ground-based Midcourse Defense’s new kill vehicle, the RKV. Despite promises to improve homeland missile defense, at the end of the Trump administration, there are empty holes in Fort Greely, Alaska, where ICBM-killing interceptors ought to be.

The Biden administration has so far committed to moving forward with the Next Generation Interceptor (NGI), which will provide the homeland with needed technological improvements against complex missile threats while complementing the GBIs already in the field, and improving the overall GMD system. But there are concerns that the service life extension program for GMD, as well as plans for keeping a GBI flight-testing program commensurate with the demands of the threat, are under-resourced.

Hill, the MDA director, continues to advocate for an underlay architecture to bolster GMD while engineers develop NGI. This would include the SM-3 IIA as well as THAAD, both highly capable systems designed for regional contexts. The political hurdles to fielding a sufficient number of these systems to provide the same degree of coverage as GMD are great, and it seems unlikely the underlay concept will progress beyond the logical concept of deploying Aegis Ashore to Hawaii.

Meanwhile, Central Europe hosts the regional missile defense site as part of a phased plan to provide crucial allies with missile defense against threats from the Middle East. This was initiated by the Obama administration in 2009. The Romanian site received operational certification in 2016, but the Polish site has run into problems with the construction contractor and has been delayed by four years.

The above challenges would be problem enough in a stable world. But every nation who seeks to challenge America has taken the last 15 years to invest heavily in weapons specifically designed to challenge the Pentagon’s missile defense architecture. 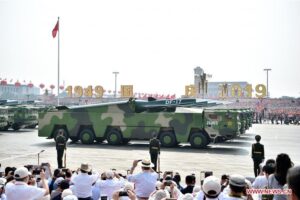 Rogue state actors like North Korea and Iran are more advanced today than they were twenty years ago. Kim Jong-Un has tested more missiles than his father and grandfather combined, and twice in 2017 tested his regime’s Hwasong-14 intercontinental-ballistic-missile (ICBM). The possession and testing of such a missile indicated that North Korea could likely deliver a nuclear warhead all the way to the American Midwest.

Meanwhile, Iran’s technical development continued apace. In April 2020 the Iranian Revolutionary Guard Corps successfully launched a satellite, demonstrating a technological accomplishment with direct applications for an ICBM launch. And over the last few years the Iranian regime carried out attacks against US and coalition forces using ballistic missiles, cruise missiles, and sometimes missiles in combination with unmanned aerial systems (UASs).

Critically, the US homeland is also vulnerable to attack from Russian advanced long-range cruise missiles. Although the US nuclear deterrent remains the primary means of deterring a strategic attack against the US homeland, as Gen. Glen Vanherck of US Northern Command warned Congress, “adversaries have adapted new techniques and fielded advanced weapons systems with the potential to threaten the homeland below the nuclear threshold.” He added that Russia “remains the most acute challenge to our homeland defense mission.”

And looming over everything in Washington these days is China. The most pressing flashpoint for a potential military conflict with China is over the security of the democratic island nation of Taiwan. Beijing views uniting Taiwan with mainland China as a vital national interest, and the United States views a free Taiwan as geopolitically critically to maintaining a free and open Indo-Pacific. Because Guam will be the hub of a US military response against China, its current vulnerability to China’s massive missile arsenal could have the unintended effect of tempting Beijing to action.

To prevent China from concluding it would be worth the military and political cost to attack the American territory, and to enhance deterrence, the United States must deploy — and fast — an initial missile defense architecture that can defend US bases from the ballistic and cruise missile threats the PLA would use in a bombardment, and it can improve upon over time. The plans for the architecture need not be complete nor entail the full coverage that the Navy wants. We do, however, have to get started, after talking about and deferring decisions for far too long.

Investments in Guam, investments in new technology, investments in maintaining existing systems — these all cost money. Yes, there are other bills to pay, but buying more planes or tanks won’t matter if the bases they are hosted on are easy targets — or if the homeland is underdefended. It’s time to spend now, so we can all benefit later.

Rebeccah L. Heinrichs is a senior fellow at Hudson Institute specializing in US national defense policy with a focus on strategic deterrence.