WASHINGTON: On a beat that includes the F-35 Joint Strike Fighter, the iconic centerpiece of the Navy’s carrier strike groups and one-third of the nuclear triad, it’s easy to get tunnel vision. But the Navy is a massive organization, and there’s a lot more happening behind the scenes than just building ships and testing warplanes.

My favorite stories from 2021 are all issues that matter to the Navy, but, in my humble opinion, never get enough attention.

[This article is one of many coming in a series in which Breaking Defense reporters look back on the most significant (and entertaining) news stories of 2021 and look forward to what 2022 may hold.]

The surge sealift fleet is perhaps the greatest example of a spectacularly important capability to the Navy that never sees headlines in the same way the Gerald R. Ford (CVN 78) aircraft carrier does. The plans to restore this fleet, responsible for moving ground supplies in the event of a large-scale combat operation, are managed by the Navy, Department of Transportation’s Maritime Administration and US Transportation Command. While there does appear to be consensus among both Pentagon officials and lawmakers that it is important, it seems sealift always takes second fiddle in the budget to submarines and missiles. The fact the former leader of US Transportation Command, Gen. Stephen Lyons, made sealift his top priority is why I place this story high on my list.

2) The Navy wants a fleet of unmanned ships. Can industry take the strain?

Next up is maintenance. Before you start emailing me about the thousands of stories already done on ship maintenance, allow to me clarify: unmanned vessel maintenance is going to be the next major problem the US Navy faces, and it’s not getting much light in the headlines right now. Most folks I talked to for this story assured me industry can in fact “take the strain.” And they will have to, because these same folks repeatedly told me the public shipyards would never be tasked to service a small unmanned undersea vessel.

Points taken, but my counter is that new unmanned fleets like the service is talking about will still require the Navy to manage and contract all this maintenance. It will still be on the Navy to gain a clear understanding of what kinds of problems arise in a ship when it lacks human interaction for three months. Lastly, it will still be the Navy’s dime funding all this work, and the onus on them not to leave it on an unfunded priorities list that lawmakers may or may not choose to heed. 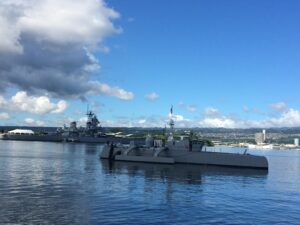 The experimental unmanned Sea Hunter is the forerunner of the Navy’s proposed fleet of robotic warships.

3) The Navy wants industry to manage its autonomous integration efforts

There is no shortage of stories about unmanned vessels and what they can bring to the battlespace. But what is overlooked is the myriad of technologies and Navy projects that must come together in order to actually achieve a future unmanned fleet. That brings me to this story about a benign-looking contract to help manage the Navy’s Rapid Autonomy Integration Lab.

The RAIL, a project stemming from Capt. Pete Small at the Program Executive Office for Unmanned and Small Combatants, will play an integral part in making sure the various capabilities and technologies needed to develop and organize a fleet of unmanned systems will come together coherently. Attention is always given to the prime contractors who construct these vessels, but less so for those who manage the massive behind the scenes work necessary to make them function properly.

4) US should pursue “deterrence by detection,” says Marine Corps commandant

I may be stretching my theme of “underrated Navy topics” by suggesting this story, but hear me out. Marine Corps Commandant Gen. David Berger discussed this idea of highlighting microaggressions by adversaries on the world stage as a way of deterring “gray zone” activities. There is no shortage of news stories about China or their activities in the South China Sea. But what I appreciate about this story, and about Berger himself as a service chief, is that he is putting out ideas on ways to counter the gray zone threat, rather than just complaining publicly. In other words, I’d like to see less stories about flag officers talking about Chinese militia forces harassing local fishermen, and more stories where those same officers explain what the Pentagon’s response will be.

The Navy is touting “Project Overmatch” as a massive project to link the service’s vessels and systems together, under the umbrella of the Pentagon’s Joint All Domain Command and Control effort. In this story, about an otherwise benign acquisition document, we get a sense of the movements behind the scenes needed to actually make Project Overmatch work. This is similar to the previous story about industry managing the RAIL — there are always headlines about the results, but much less so about the process to make it happen. Acquisition is often derided in the Pentagon as slow and outdated. That may be true, but it doesn’t change the fact that not much happens in the military, the government or the world writ large without money to back it up.