WASHINGTON: The Navy’s new operational concept, known as Distributed Maritime Operations, has made unmanned vehicles an increasingly popular topic for Navy-centric lawmakers, industry and think tank analysts alike. In the future fight, the theory goes, the service will scatter numerous, relatively small ships across the battlespace, and those without human lives aboard them could be sent into the most dangerous situations.

“In other words, they give our operational commanders flexible and effective options to maneuver within a contested environment,” according to written congressional testimony submitted in June by the chief of naval operations, Marine Corps commandant and acting Navy secretary.

But a question that rarely comes up during these discussions is what happens when these vessels come home for upkeep. How will the Navy — and perhaps more pertinently, industry — cope with maintaining this new fleet of ships, when it has historically struggled to keep pace with the legacy fleet?

During the Sea Air Space exposition last week, Breaking Defense asked a variety of shipbuilding executives this question. Most of them expressed confidence that the infrastructure and resources available to the Navy could take the strain. Some said they are more worried about keeping these vessels running at sea without sailors to intervene if something malfunctions. At least one contended the smallest of these systems are not warships destined for extended maintenance, but an attritable resource like a satellite — it does its job and is then expended.

However, none of them rejected the key premise that it is industry who will have to bear the weight of maintaining the Navy’s forthcoming fleet of unmanned ships.

“There’s a lot of repair and overhaul yards that we have access to. That doesn’t necessarily have to be the big ones where we send all the aircraft carriers or a destroyer,” said Joe DePietro, a vice president at Lockheed Martin. “Because we understand how to plan the maintenance, and we know how to work with the customer on how to contract the maintenance, we’re in a pure space discussion.”

DePietro added that where these vessels are homeported relative to the available pier space and other nearby vessels awaiting maintenance availabilities will be a key question for the Navy. “San Diego is very dense. Florida is dense. Virginia is dense. Where’s the smart spot? Is it up where we do big ships, like in the Pacific Northwest?” he said.

Larry Ryder, an executive at Austal USA, also predicted real estate in each shipyard may become more of an issue as the number of vessels being serviced simultaneously increases. His company just last year expanded its own shipyard in Mobile, Ala. That purchase included a new dry dock — one where the company will fully control the schedule. (Austal was previously relying on sharing dry dock space with other companies.)

Though Ryder said the question of volume of ships is not as front of mind as much as finding an edge in the unmanned systems market itself. 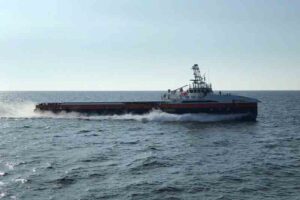 Chris Deegan, president of Gibbs & Cox, a maritime vessel design firm, like others noted the issue of space and added that he believes industry has the capacity necessary between the East, West and Gulf Coasts. But Deegan and executives from Leidos argued they are more concerned with how unmanned vessels are maintained at sea rather than in port. (Leidos earlier this year acquired Gibbs & Cox.)

The key to doing that successfully, they argued, will be on designing ships made with autonomous, unmanned transiting in mind. Sea Hunter and Sea Hawk, the Leidos-built USVs being used by the Navy for experimentation, are examples of that.

“We’ve literally went through every type of connector, every plug, every type of circuit breaker, the individual pumps you’re going to use — because you would select those based on the fact that you’re building an architecture that is not going to have people on board to do things like plug back in the cat five cable that came out,” said Dan Brintzinghoffer, an executive managing Ledios’ unmanned maritime systems portfolio.

Questions of reliability for unmanned systems have been a friction point between lawmakers and the Navy. Past defense policy bills have called on the service to do subsystem testing for their unmanned vessels to ensure the parts they are using would be capable of running 30 or 60 days without human intervention.

But the mindset of building a ship designed to be autonomous and unmanned goes far beyond just developing software or picking a component.

“If the communication card that’s running the ability of two engines to talk to one another goes out, the engines will shut down,” Brintzinghoffer said. “Did you take that into account in your design, even though it has nothing to do really with the engine? It has nothing to do with autonomy. But you have to account for that as one of the ways in which the engine could shut down.”

Jay McFadyen, an executive with Fairbanks Morse Defense, which had focused on building engines up until recently when it changed names to expand its portfolio, said the technology required to shift from the sorts of onsite monitoring done in port to remote monitoring needed for vessels at sea already exists.

“That’s been in play in the airline industry for a couple of decades at this point,” he said. In his view, the “biggest barrier” to implement the technology in the Navy will be moving that data back to Navy commanders in a secure fashion.

All these viewpoints revolve around the idea that the service’s unmanned vessels will return to port and be repaired for subsequent deployment in the same fashion traditional warships operate.

But Nevin Carr, a retired rear admiral and former chief of naval research who is now also an executive at Leidos, argued the Navy should view most unmanned systems as more akin to a satellite than an aircraft carrier. They should be affordable and built to last long enough to complete the mission; when that mission is finished, the system is deemed expendable.

“You can do that,” Carr said of designing unmanned vessels to operate in that fashion. “It’s just an engineering problem.”