Buried within the Navy’s fiscal 2022 shipbuilding plan is a major disruption of the amphibious fleet and its industrial base.

It’s also a warning to the Marine Corps: if you can’t explain why you want multibillion-dollar ships, then you probably won’t get them.

The Collapse of Amphibious Ship Planning

For decades, the requirement for amphibious ships had been stable at 38. The calculation was straightforward. Wartime plans required two Marine expeditionary brigades to conduct an amphibious operation. Each amphibious brigade needed 17 amphibious ships for embarkation (assault echelons only―follow-on echelons went in commercial shipping.) At any time, about 10% of the fleet is unavailable because of long-term maintenance. Therefore, the full requirement for amphibious ships was 2 x 17 = 34 x 1.1 = 37.4 ≈ 38. The Marine Corps and amphibious advocates accepted a “resource constrained” level of 33/34 ships, though the Trump administration’s “355 ship fleet” had the full 38 amphibious ship goal. The mix of amphibious ships comprised LHDs/LHAs with a large flight deck, LPDs with a mix of aviation, cargo, troop, and landing craft capacity, and LSDs with a large well deck and cargo capacity. All these ships were large―25,000 tons to 41,000 tons (full load).

Then, in July 2019, newly installed Marine Commandant General Berger published his Commandant’s Planning Guidance, which shifted the focus of the Marine Corps towards an island campaign of small units and long-range fires in the Western Pacific. Large amphibious ships, being vulnerable and few, did not fit well with this new concept. 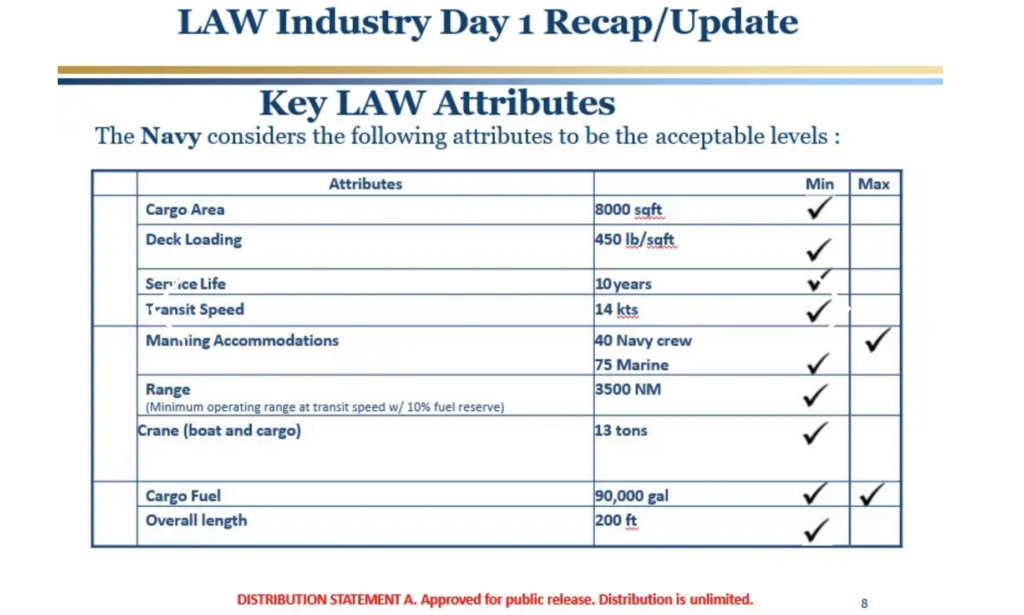 Navy and Marine Corps documents envisioned the LAW as a ship that could carry small groups of Marines around the islands of the Western Pacific for distributed operations against the Chinese. Because these forces would be small, a large ship was not needed. Because these operations would occur within an adversary’s “weapons engagement zone” (the Marine Corps’ name for the defensive bubble around the Chinese homeland, what others called an anti-access/area-denial zone), a small ship was easier to risk. Total LAW numbers were projected to be in the high 20s or low 30s.

The Navy is still working on the design of the LAW. Early concepts envisioned a ship with “minimum length 200 feet, crew of no more than 40 sailors, embarkation for least 75 Marines, minimum speed of 14 knots…11 day missions” This would make them about the size of a World War II landing craft infantry (LCI), much smaller than the De Soto County-class tank landing ship (LSTs) of the 1960s to 1990s and even smaller than World War II LSTs. Whatever configuration the Navy settles on, the ship will be too small and uncomfortable for extended global deployments. Instead, LAWs will move small Marine units from one regional location to another, for example, from Okinawa to a wartime location in the South China Sea.

Marine Corps and amphibious advocates were adamant that the LAWs would be in addition to the large amphibious ships. For example, the fleet proposed by former Defense Secretary Mark Esper in December 2020 had 61 to 67 amphibious ships.

Nevertheless, even this truncated plan contains some useful insights about the future amphibious fleet. The key insight is that the goals are lower than expected: eight to nine LDA/LHDs and 16 to 19 “large amphibious warfare ships,” presumably the LPDs/LSDs. That’s a total of 24 to 28 large amphibious ships, far below the previous target of 38 (33/34 resource constrained) and the current fleet of 33 ships. The plan also accelerates decommissioning of LSD 41 Whidbey Island.

News for the LAW (called “small amphibious warfare ships” in the plan) is mixed. The class has a secure place in the plan but with a wide range of 24-35 total ships. The plan notes that the LAWs “complement a smaller number of traditional amphibious warships,” showing that the reduction in large ships is intentional.

The 2022 budget contains only a small amount of money for amphibious ships (LPD Flt II $61 million, LHA 9 $69 million) and no authorizations for new ships. The LAW does not appear in the shipbuilding budget yet, the lead ship now being planned for fiscal 2023. The budget does have $13 million for development.

At the low end of the range, the Navy would stop building LHDs for about a decade because the current inventory is sufficient. At the high end, the Navy would build an LHD every four to five years. Neither level requires replacing the Bonhomme Richard LHD-6), which was destroyed in a fire. That’s just a loss to the fleet.

The plan implies curtailing the LPD-17 Flight II program at three to six ships, far below the expected 13 ships. Indeed, at the lower level, the Navy would build just one more LPD-17 flight II in addition to the two already under construction.

This is bad news for HII, which builds both the LHDs and the LPDs. The company has wisely proposed a multi-year buy of LPDs and an LHD, seeking to lock in the programs for the near term. Over the long term, Navy plans might change allowing a larger total buy. That approach worked brilliantly with HII’s 2019 proposal to build two aircraft carriers, which set carrier construction for a decade regardless of what shipbuilding plans might envision for a long-term carrier inventory.

The new shipbuilding plan is good news for the middle tier of shipbuilders, which can build a ship the size of the LAW (2,000 tons?) but not a ship the size of an LPD (17,000 tons empty). Nine shipyards responded to the Navy’s request for information.

For decades, the Navy and Marine Corps had a settled approach to amphibious ships and amphibious operations. The wartime requirement would set the total size of the fleet. However, that fleet was large enough to sustain a continuous forward presence for crisis response, humanitarian assistance, and exercises with allies and partners in three theaters―the Indo Pacific, the Middle East, and Europe. That construct is now shattered. The smaller fleet of large amphibious ships implies a reduced level of forward deployments. The LAWs are too small to fill in. (Even the 33-ship fleet was too small to meet all the requests of the regional commanders. That requires “close to 54” amphibious ships.)

The Navy and Marine Corps might argue that the day-to-day force demands are enough to justify the higher requirement for large amphibious ships. Services have justified elements of military force structure―most prominently, the carrier fleet―that way in the past. Gen. Berger recently seemed to contradict the shipbuilding plan by calling for “no fewer than 31 traditional amphibious ships: 10 LHD/LHAs and 21 LPFs.” (He also asked for 35 LAWs.) Nevertheless, seeking ships without a strong warfighting justification will be a tough sell.

The amphibious fleet is in an uncomfortable place, with no stated justification for its most expensive elements and strong conceptual support for its least expensive and least capable elements. The Biden administration may move in a different direction when it publishes the full long-term shipbuilding plan, but for now, the future of the amphibious fleet looks stormy indeed.

Mark Cancian, a member of the Breaking Defense Board of Contributors, was a Marine colonel and senior official at the Office of Management and Budget before he joined CSIS.