With a combination of speed, range, and reaction time, Bell’s V-280 Valor can penetrate A2/AD environments and swiftly reposition a ground maneuver force over 200 nm.

When you reflect on the near peer/peer Great Power competition, you usually think about Joint All Domain Command and Control (JADC2) and network architecture that shares sensor and targeting data at machine speed. There are also weapons systems that combine digital prowess with physical impact needed to operate at ranges dictated by anti-access/area denial (A2/AD) reality, and do so at the velocity that the Defense Department will rely upon to project power against today’s adversaries. Reaction time to an objective will be a key to delivering overmatch capability that will make the difference.

The Army’s Future Long-Range Assault Aircraft (FLRAA) is one of those tactical weapons. An element of the Army’s Future Vertical Lift (FVL) program—which is counted among the Army’s six modernization priorities—FLRAA’s mission will be to transport 12 soldiers at high speeds in concert with the Multi-Domain Task Force (MDTF) and/or as part of a joint force over long distances and through sophisticated air defenses.

“The future fight, as described in the National Defense Strategy, will be characterized by greater speed, growing autonomy, and increasingly dispersed footprints, in degraded or denied environments,” wrote Army Chief of Staff Gen. James McConville as part of his vision to remake the Army as a multi-domain force by 2035. “Whoever is able to see, understand, and act first, will win. For the Army, the core challenges of the future fight are speed and scale.”

FLRAA and its companion program FARA (Future Attack Reconnaissance Aircraft) are designed to fly further and faster than existing aircraft, and with those attributes Army Aviation will give maneuver force commanders the asymmetric advantage of reach, agility, and lethality needed to seize, retain, and exploit tactical opportunities in contested environments. 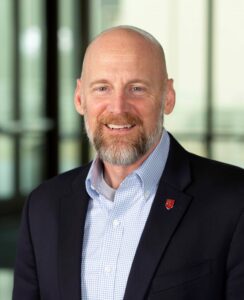 “Modern warfare is a range and reaction time competition, upgraded defenses aid in creating standoff,” said Carl Coffman, vice president, Future Vertical Lift Strategy at Bell, which is offering the V-280 Valor and Bell 360 Invictus to meet the requirements of the Army’s FLRAA and FARA programs, respectively. “It’s like a prize fight where the boxer with the longest reach and fastest reaction time has an advantage. With the increased ranges, ISR capability, and network systems of our competitors, we’re at a condition of near parity when it comes to our capabilities and potential threats facing the military.

“We’ve got to take a leap ahead with new capabilities so that we can achieve overmatch. It’s only through overmatch that we can achieve success in Joint All-Domain Operations, by deterring a fight and returning to a competitive state, managing a crisis and preventing the fait accompli, and then winning a conflict if and when necessary. Revolutionary FVL solutions are a capability required to stay in the crisis management phase, as the Army refers to it, and prevent the evolution into a full scale conflict.”

The Optimal Technology for FLRAA

Helicopter technology cannot deliver the aerial dominance needed in the decades to come, no technology can dominate forever. Overmatch is not attainable using current Army aircraft. It is necessary to continue to seek new opportunities to capitalize on advantages that deliver a leap forward in capability and embrace change. A transition of missions from the Global War on Terrorism to Great Powers means increasing operations over the vast distances of the Pacific, harsh environments in the Arctic, and extended ranges in Eastern Europe and Africa.

Bell’s FLRAA candidate, the V-280 Valor, a new generation of tiltrotor that builds on more than 600,000 hours of operational time on the battle proven V-22 Osprey, provides that capability.

“FLRAA should not be considered a direct replacement for our current fleet of utility helicopters – it is a leap ahead into an entirely new capability space for the Army,” said Coffman. “H-60s are great aircraft but it’s time to move on from traditional helicopter technologies because you can’t push a traditional helicopter through the air at the speeds, ranges and with the endurance you need for long-range assault aircraft to fulfill their missions.

As part of the MDTF, the V-280 gives the Army and the joint force the ability to break through A2/AD challenges created by long-range precision fires or cyber/electronic warfare attacks, for example. With a unique combination of speed, range and reaction time, the aircraft is able to penetrate an A2/AD environment and reposition a ground maneuver force over 200 nautical miles at a speed that allows commanders to pursue problems they’ve created for the enemy.

Bell, assessing all the options and applying its experience to swiftly developing Army challenges, determined that the optimal technology for the Army’s FLRAA requirements is a clean-sheet, high-performance tiltrotor.

“What we’re not doing is taking a technology and applying it to a problem where it really doesn’t fit; we don’t have a solution that’s looking for a problem,” said Coffman. “We’ve taken the Army requirements and developed solutions based on operational experience and engineering analysis. Bell assessed several technologies, including coaxial solutions, and determined that based on the complexity, technical maturity, cost and weight of the drive and rotor system, and the impacts on sustainability, in addition to the speed, range, and endurance requirements, it wasn’t the best value solution for the FLRAA or FARA mission.”

Earlier this year, each competitor was awarded second phase Competitive Demonstration and Risk Reduction (CD&RR) contracts in the $84 million to $97 million range for FLRAA under a fast-procurement Other Transactional Authority (OTA) contract vehicle.

The Army says that the OTA will let the winning company conclude preliminary design reviews for both the air vehicle and weapons system in fewer than 365 days from award, speeding to an earlier Milestone B decision. That reduces risk for the Army by giving the program additional months for the design, build, and testing of the prototype aircraft.

“CD&RR Phase II accelerates digital engineering design work to the subsystem level and mitigates industrial base workforce risk while maintaining competition,” said Brig. Gen. Rob Barrie, Program Executive Officer, Aviation. “Through CD&RR efforts, Army leaders have had the ability to make early, informed decisions ensuring FLRAA capabilities are not only affordable, but that they meet multi-domain operations requirements while delivering on an aggressive schedule that does not sacrifice rigor for speed.”

“The use of the OTAs enabled the alignment of draft requirements with the FVL CFT, executed cost informed requirements trade off analysis, generated cost efficiencies, and increased flexibility for the Army,” he said. “I’m very proud of the team and looking forward to seeing the fruits of the second phase of CD&RR efforts to continue burning down risk.”

“Army aviation is on a fantastic glide slope right now with affordable leap ahead technology that is informing how we fight,” said Maj. Gen. David Francis, commanding general, Army Aviation Center of Excellence, during last October’s Association of the U.S. Army tradeshow and conference. “We are updating doctrine in almost real time as our concepts become a reality. We fight as a combined arms team, and how we integrate with our fires and maneuver elements…is absolutely critical.”

FVL’s FLRAA and FARA programs are designed to enable and integrate with the five other Army modernization priorities–long range precision fires, next-generation combat vehicles, network modernization, air and missile defense, and soldier lethality. Each represents a leap ahead in capability.

“The six modernization priorities are absolutely all connected,” said Coffman. “You’ve got to have a responsive fires capability. You need to be able to target long-range fires with a combination of tools, including the next generation speed and range capability of the Future Attack Reconnaissance Aircraft. You’ve got to be able to quickly reposition a ground maneuver force anywhere in a region to deliver or threaten delivery of direct and indirect fires.

“The Army has been clear that it needs modern systems to exhibit speed, range, and convergence to achieve their goals. The Army breaks it down very simply at the tactical level: you must be able to move, communicate, and shoot while informing your joint force-partners of your location.”

In order to capitalize on the DoD’s combined arms fight capabilities, many of the elements of the six modernization priorities must be networked so actions can be deconflicted. That needs to happen at a rate that’s much more rapid than has ever been seen in the past. To stay ahead in the decision cycle, in order to compete and deter, and win once conflict does begin, that networked environment is critical.

That’s not just networking within the ground maneuver force, it includes connection to FLRAA and FARA, next-generation combat vehicles, and long-range precision fires. It’s also knowing where air-defense capabilities are positioned, especially those operating in a lower-tier air domain. They have to know where you are and what you’re doing. Once soldiers get to an objective area, they have to locate, engage, and provide networking capabilities for targeting. The goal is to initiate and/or impact a rapid progression through the kill chain to bring the right solution forward on the objective. It’s also not just in the Army, but across the services. That allows joint force capabilities to converge at the right time and at the right place.

Reaction time and maneuver space are fundamental challenges for ground-force commanders, and it’s going to be a bigger challenge in the future. Speed and range are the answers to those challenges, or significant contributors to the joint force overcoming those challenges. That’s one of the critical advantages that the V-280 provides.

The V-280 Valor gives soldiers the ability to create and capitalize on tactical advantages from a distance. Maneuverability, speed, range, and reaction time where and when it matters–across the entire mission profile–are the enablers that create opportunities for overmatch on the battlefield.

“The bottom line is the Future Long-Range Assault and Attack Reconnaissance Aircraft are going to be joint force requirements in the future fight,” said Coffman. “We cannot continue to incrementally improve current capability but rather need a leap forward. We have to take advantage of the speed, range, and endurance capability available via modernization or we’re never going to achieve overmatch. Without introducing new programs our ability to compete and manage crises or any potential conflict is significantly reduced, if it gets to that point.”

The Army has made important strides in those areas through its significant investment in the FVL programs and the V-280 Valor and Bell 360 Invictus. Now is the time for the Army to capitalize on its modernization effort with the lowest-risk, highest reward programs that will quickly get these revolutionary capabilities fielded to the soldier.

Source
Range, Speed, And Reaction Time At Operational Distances Will Define The Next Phase Of Army Aviation – Breaking Defense Breaking Defense is written by Barry Rosenberg for breakingdefense.com