As the US works to develop a hypersonic arsenal, North Korea has now claimed three different launches as successful hypersonic weapons tests. Few take Pyongyang at its word, but a new analysis by experts Ralph Savelsberg and Tomohiko Kawaguchi has concluded that the DPRK likely has developed a hypersonic weapon. In this exclusive analysis for Breaking Defense, the pair explain their work — and their troubling conclusions.

North Korea has already performed more missile tests in 2022 than they did all of 2021. Some of the tests have involved missiles they have launched before, but the most eye-popping claim from Pyongyang is that a pair of launches, on Jan. 5 and Jan. 11, involved a previously unknown capability: a hypersonic missile.

According to KCNA, the DPRK official press agency, on its Jan. 11 flight, the hypersonic glide vehicle (HGV) separated from its booster after travelling 600km. Subsequently, it flew a gliding trajectory, during which it made a turn, before hitting its target at roughly 1,000km from the launch site. KCNA also published images of Kim Jong Un in front of a blurred screen with a drawing of the vehicle’s planned trajectory. The initial heading points towards Japan, but then subsequently turns north.

Independently, the South Korean military confirmed that the missile flew more than 700km, reached a maximum altitude of 60km, and achieved a speed equivalent to Mach 10. The Japanese Defense Ministry published a map with the estimated splash zone for a ballistic trajectory, but acknowledged that the missile could have flown further on an “irregular trajectory.” There is no independent confirmation of where the missile landed, which leaves the question whether it, at least in theory, could have flown the planned trajectory.

Using a size estimate, based on previously analyzed data and engineering constraints from related missiles, we have performed a computer simulation of the flight of this new missile and the HGV. The results match the observed maximum altitude and velocity, as well as the planned trajectory shown by the DPRK. So this trajectory is plausible — and that is worrying, because it severely challenges existing missile defenses.

Trajectory map shown on a screen in an image of Kim Jong Un attending the January 11 launch (left) and a map published by the Japanese Defense Ministry of the impact zone if the missile would have flown a ballistic trajectory (right).

This isn’t the first time the DPRK has claimed to launch a hypersonic weapon; in Sept. 2021, a missile dubbed the Hwasong-8 was launched, but statements in South Korean media suggest that flight failed. Based on images of the January launches, the new missiles are of a different design. Both types have a rocket booster, apparently powered by the engine cluster used for North Korea’s Hwasong-12 and Hwasong-14 ballistic missiles, and at a first glance these look very similar. However, the small Vernier engines used for steering are positioned closer to the main nozzle on the new missile than on the Hwasong-8.

Images scaled with the diameter of the main nozzle, instead of with the body diameter, show that the new booster is shorter and narrower. Overall the missile is also shorter than the Hwasong-12. This smaller size is confirmed by footage from an exhibition held in Pyongyang last year, where this new missile, still unknown at the time, was displayed next to a Hwasong-12. 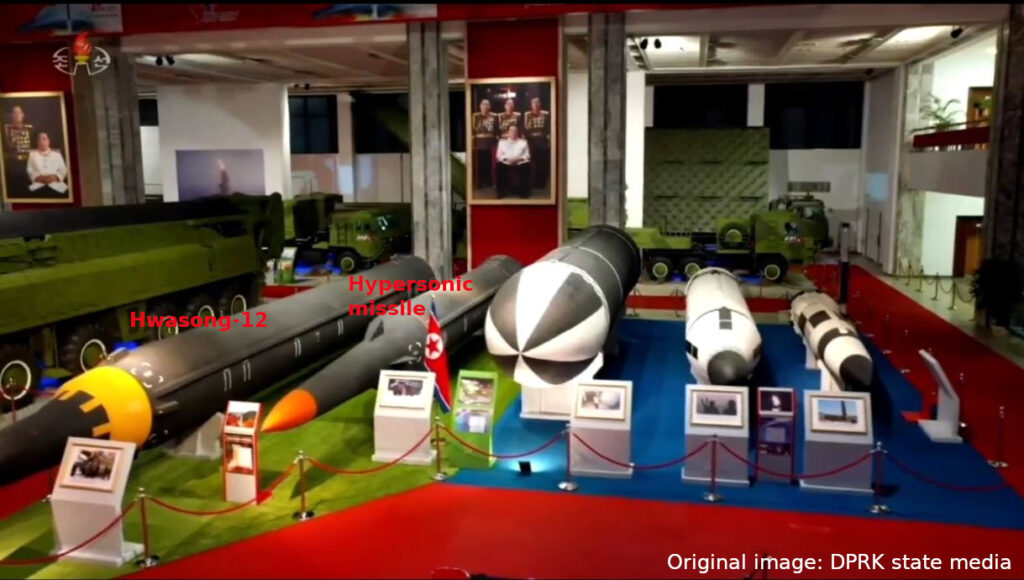 Missiles on display in Pyongyang, with the hypersonic missile lying next to the Hwasong-12. (DPRK State Media, highlights bySavelsberg/Kawaguchi)

The hypersonic glide vehicle is cylindrically symmetric, with four triangular control fins. This is similar to Maneuverable Re-entry Vehicles (MaRVs) used on some ballistic missiles, such as the Iranian Qiam-2. On that missile, the aerodynamic controls are used to increase the accuracy of the impact point. However, such a shape can also generate lift for a gliding flight, by using the control fins to keep it at a small angle of attack relative to its velocity vector.

For our simulation we use a medium-fidelity model, in which the forces that act on the missile and the glide vehicle are calculated as a function of time. Based on the size comparison with the Hwasong-12, the new booster is approximately 9 m long (excluding the engine nozzles) and has a body diameter of 1.37 m. It uses liquid propellant, and its size indicates a propellant mass of approximately 10.8 tons, with a burn time of ~66 s based on the Hwasong-12 engine. With suitable masses for the airframe and engine, the estimated total booster mass is 12.9 tons. The glide vehicle is approximately 4 m long with a base diameter of 0.83 m and we estimate its mass to be 900 kg.

Simulation results: altitude versus range (left) and velocity as a function of time (right). (Savelsberg/Kawaguchi)

In the simulation, by launching the missile on a depressed ballistic trajectory to a distance of 750 km, we find a 60 km apogee and maximum velocity of 3.4 km/s or roughly Mach 10 — matching what was reported by South Korea. During its descent, starting about 600 km from the launch site, the simulated glide vehicle starts to generate lift and its trajectory levels off at an altitude of roughly 30 km. During this flight phase it also turns north, with a pre-set 350 km turn radius. The turn requires a sideways aerodynamic force. Finally, the vehicle pitches down towards the target, using proportional navigation.

These maneuvers increase aerodynamic drag and, since it is an unpowered glider, this decreases the velocity. These effects are all included in the simulation. Lift and drag coefficients, as a function of the angle of attack, the Mach-number and the altitude, were estimated using an aero-prediction code, based on the shape of the vehicle. 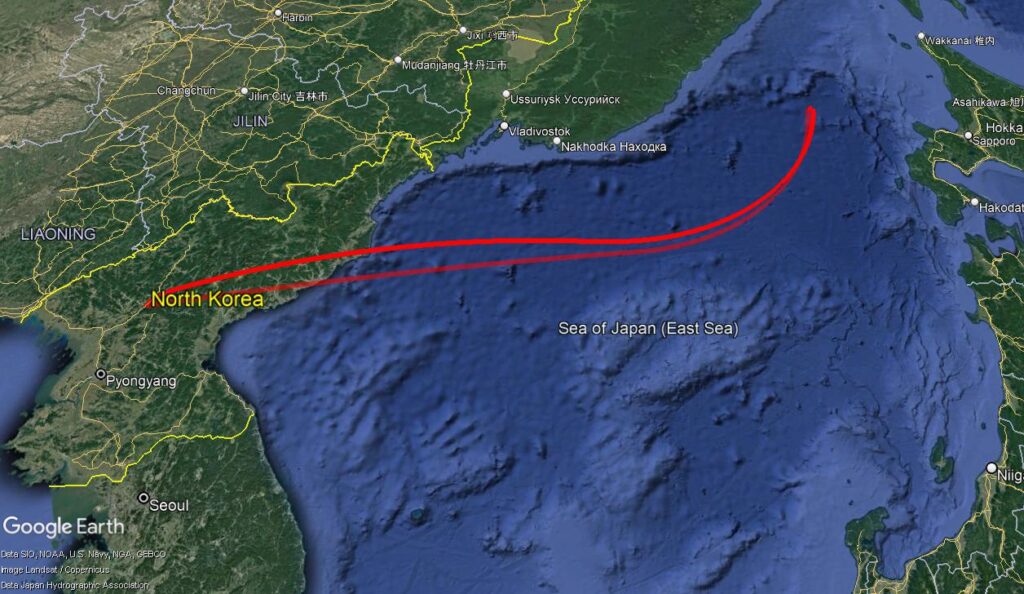 Visualization of the simulated trajectory and the associated ground track in Google Earth. (Savelsberg/Kawaguchi)

In the common definition, a hypersonic missile maneuvers inside the atmosphere and flies faster than Mach 5. The simulation results show that, during the glide, the velocity gradually decreases to about 1.6 km/s, roughly Mach 5, so it indeed is hypersonic. The simulated ground track closely matches the trajectory drawn on Kim Jong Un’s screen, so that trajectory is plausible.

The simulation confirms that the Jan. 11 launch did, indeed, meet the definition of a hypersonic weapon. What is still unclear is whether the glide vehicle completed the trajectory planned by DPRK or not.

In practice, hypersonic flight is difficult and it is uncertain whether the flight control system and the construction of the glider are up to this task. If the DPRK gets it right, though, this will be a much more dangerous weapon than ballistic missiles with similar ranges. Using our model, we can also calculate trajectories to different targets. For instance, the initial trajectory pointed towards Misawa Air Base; if it were the target the missile would not have to execute a turn. Therefore it would lose less velocity during the glide phase, which increases the range sufficiently for it to indeed reach the base, almost 1,300 km away.

This weapon leaves only limited options for defending Japan or US bases in Japan. The trajectory is too low to be intercepted by the Standard Missile 3, because it never leaves the atmosphere. It is unpredictable and too high to be intercepted by surface-to-air missiles that steer using aerodynamic controls, while lower-tier interceptors, such as Patriot, can only cover relatively small areas. The only practical upper-tier interceptor would be a missile such as THAAD, with a larger footprint and thrusters for its flight control.

Ralph Savelsberg, a member of the Breaking Defense Board of Contributors, is associate professor at the Netherlands Defence Academy in Den Helder, the Netherlands, specializing in missile defense. Tomohiko Kawaguchi is associate professor at the College of International Relations at Nihon University in Mishima, Shizuoka, Japan. The authors would like to thank James Kiessling for his valuable comments on this work. This article does not reflect any official position or policy of the Government of the Netherlands.