The Navy unveils a more detailed, but not finalized, concept for its next-generation destroyer, the DDG(X). (Graphic by Breaking Defense; original concept model via US Navy)

SNA: The Navy has unveiled its latest concept for DDG(X), the next-generation large surface combatant that will replace the service’s workhorse warship, the Arleigh Burke-class destroyers.

While still early in its development cycle, Katie Connelly, the deputy program manager for the DDG(X), said Wednesday a fundamental decision the service had to make about the ship from the outset was whether to upgrade the combat system or the hull form. History has shown trying to do both at the same time has ended poorly, she said. 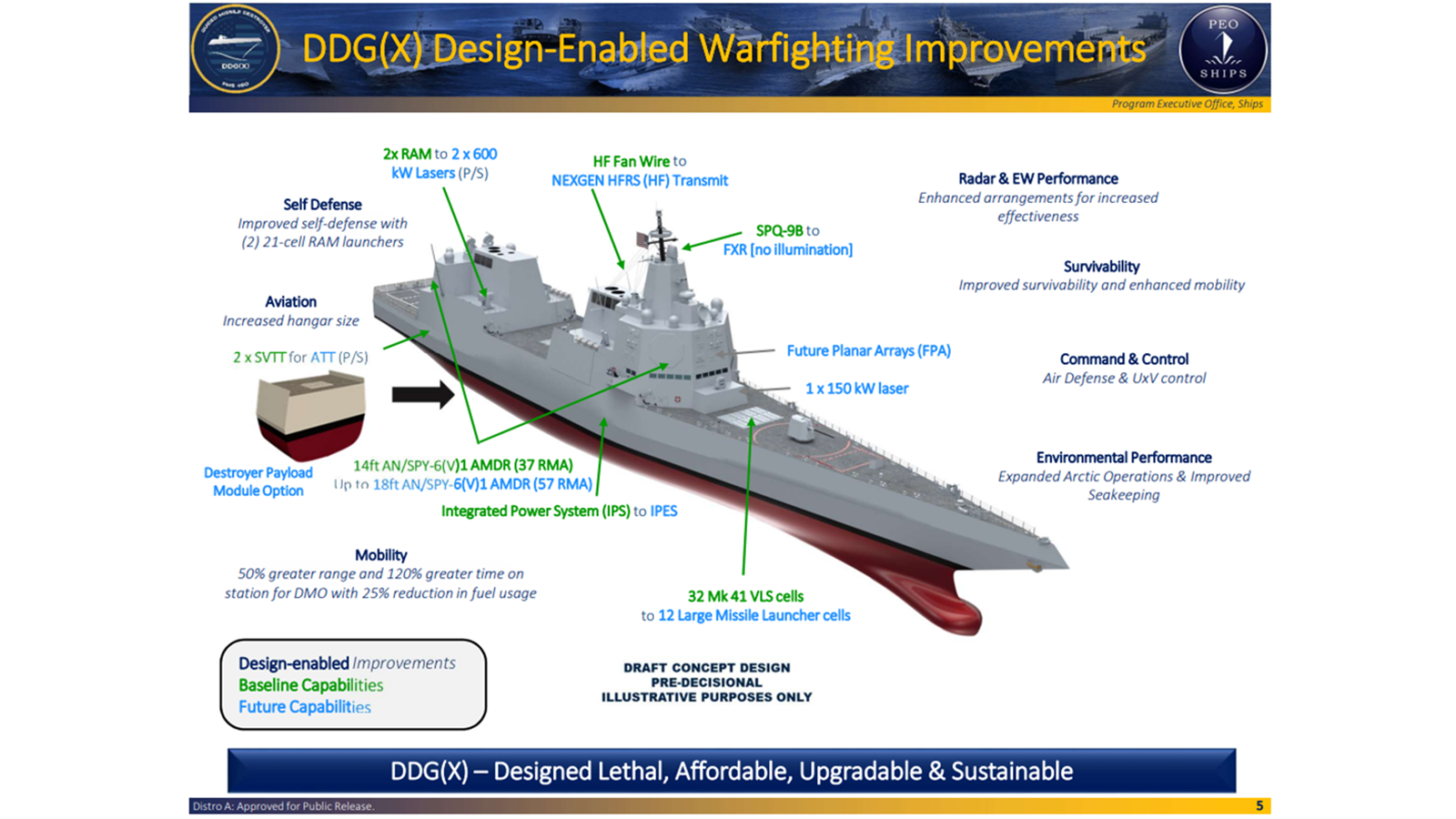 “Flight III is a highly capable combat system,” she told the Surface Navy Association’s national symposium, referring to the last variation of the Arleigh Burke-class. “We just finished spending a lot of money to develop a lot of that. It’s still highly relevant.”

Connelly added, however, that the hull form shown in the concept image is not representative of the ship and that the service has not settled on a specific design yet.

Service officials have previously said — and Connelly echoed the sentiment on Wednesday — that the Navy has effectively maximized the capabilities and technology planned for Flight III, a class still relatively early on in construction itself. Those vessels will feature the SPY-6(V)1 radar and the latest iteration of the Aegis weapon system, known as Baseline10.

A concept image of the ship shown at SNA features several high-energy lasers including one 150 kw weapon forward of the superstructure and positioned just behind what could be 32 Mk 41 Vertical Launching Systems or 12 large missile launchers. The ship could potentially also power two 600 kw high-energy lasers positioned towards the stern.

To reduce the risk of building the new vessel, land-based testing sites for the hull form and its integrated power system are planned to be built at Navy warfare centers in Pennsylvania and Maryland.

The chief of naval operations in December 2020 approved the top-level requirements for DDG(X), a preliminary step that provides a framework the service must work to when designing the ship.

“Having them part of the team helps us to inform the design process and helps us to make the right decisions as to how we can actually afford to build the ship and how producible is the design,” she said.