WASHINGTON: The Pentagon may have completed its annual budget rollout earlier this month, but the real stories on what the service plans to do with its money are just starting to come to light.

The budget justification books, or “J-books” as they’re often called, provide precise dollar figures for every program in the service’s request along with narrative explanations for why specific choices were made. What makes this year even more interesting is that in fiscal 2022, the Pentagon’s J-books did not include projections for future years. That means everything in this year’s J-books includes information and decisions the service made but didn’t necessarily disclose last year.

It takes a certain kind of defense acquisition nerd to sift through these dense texts, one that this Navy reporter proudly proclaims to be. Here’s five interesting nuggets we’ve found in the Navy’s J-books today.

The service’s FY23 budget marks the first year buying fully-fledged MQ-25A Stingrays. The J-books’ projections show a steady stream of funding to purchase four aircraft a year, starting in FY23 and running through FY27. (The service’s previous investments have been on solely on research and development efforts as well as prototype aircraft.)

To buy those unmanned aircraft, the service is seeking roughly $720 million per year in procurement funding with the intent to buy a total of 76 planes over the life of the program.

MQ-25A is the Navy’s unmanned aerial tanker, built to deploy off an aircraft carrier. It is a critical capability that will aide in the service in overcoming a long-standing shortage in strike fighters by relieving the F/A-18 Super Hornet fleet from having to conduct refueling operations.

The Navy’s budget features the amphibious warship LHA-9 as one of nine “new” vessels being bought. This rubbed some in Congress the wrong way, as funding provided in previous years combined with an explicit direction from lawmakers about how they expect the Navy to present its shipbuilding request means there is an argument that LHA-9 should not be called a “new” ship.

Breaking Defense sought, but did not receive, answers from the Navy about this discrepancy after a lawmaker publicly called the Navy out and said the request violates the law over the misrepresentation. The justification books provide clarity into the Navy’s reasoning — kind of.

The Navy starts out by saying the budget request reflects the service’s “intent” to award the key LHA-9 construction contract in FY23.

“The budget request’s association of LHA-9 with FY23 is consistent with prior budget submissions and informs Congress when award” of that contract is planned, according to the J-books. It then goes on to say LHA-9 is “not specified” in the budget request as a “new procurement” for the purposes of the previously mentioned law in question.

In other words, according to the Navy, the service presented LHA-9 this way to keep Congress informed about when they’ll award the construction contract. As far as the dispute over whether it is “new, the Navy is essentially saying they never presented the ship as new. However, it’s clear that’s not how multiple lawmakers interpreted it, and the issue is likely to come up in budget hearings over the next few months. 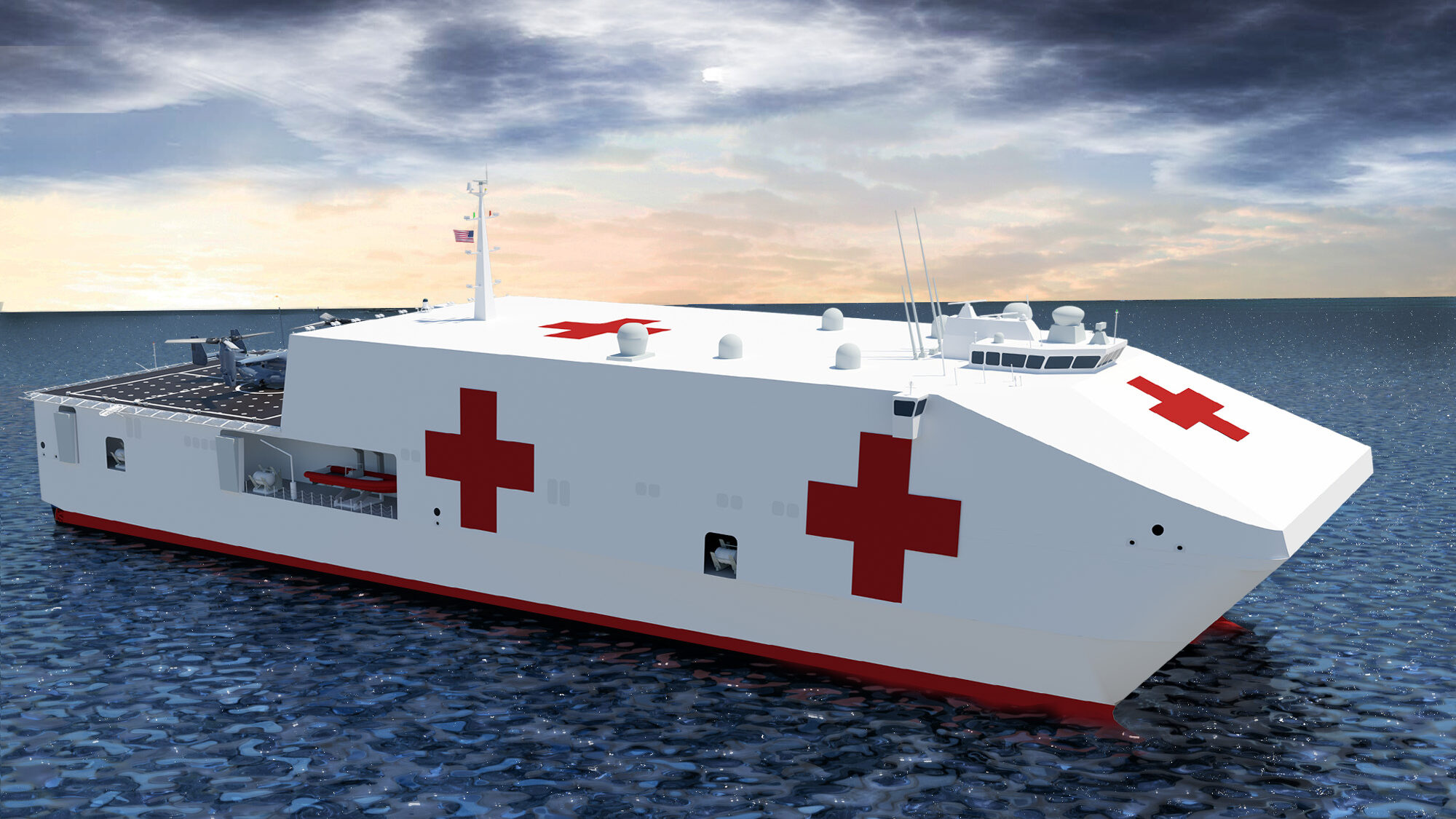 A notional graphic of what an expeditionary medical ship. (Courtesy of Austal USA)

During the Sea Air Space exposition earlier this month, Austal USA discussed internal research it had been conducting on a potential replacement for the Navy’s venerated hospital ships, Mercy and Comfort. Those vessels are renowned for the humanitarian aide they’ve distributed throughout the world, as recently as being deployed to New York City in the earliest stages of the coronavirus pandemic.

Austal’s ship idea, which the Navy has taken interest in, is called an Expeditionary Medical Ship (EMS) and is considered a variant of the expeditionary fast transport vessels. EMS will essentially take all the capabilities of a hospital ship but put them on a smaller, more agile vessel.

The J-Books confirm EPF-17 will be an EMS. In terms of its schedule, the service expects to award a contract in September 2022 and have work completed by February 2028.

The Pentagon’s struggles with surge sealift capacity are real. And the Navy’s plans, in conjunction with US Transportation Command and the Maritime Administration, for dealing with it have not always been clear based on what is in the budget justification books.

This year, however, the Navy appears to be getting serious about buying used sealift ships regularly. A new line item in the shipbuilding budget is dedicated to purchasing two sealift vessels per year for the foreseeable future. To the service’s credit, they had begun these acquisitions in previous years, but the details on them were buried elsewhere in budget request and those requests did not project the service’s future plans clearly.

The Navy plans to purchase up to a total of 17 surge sealift vessels, at a pace of 2 ships per year, up through FY27, according to the J-books.

During the Navy’s budget rollout, service officials explained there was approximately $1.3 billion worth of old shipbuilding work to finish from previous years. This can happen for a variety of reasons, such as prices going up unexpectedly due to schedule delays, but the bottom line is it needs to get done and the service needs extra cash to do it.

When questioned by reporters about that list, a top Navy budget officer didn’t get into specifics, but did say that the needs are varied across multiple programs. So a final budget takeaway is this condensed list of tasks the service plans to complete with that $1.3 billion.