GM Defense is currently building the Infantry Squad Vehicle for the U.S. Army and has its sights on winning more pursuits.

When the Army awarded the Infantry Squad Vehicle (ISV) program to General Motors Defense (GM Defense) in mid-2020, it heralded the reincarnation of a new company built to take advantage of technical and manufacturing advancements from GM’s commercial automotive side and re-imagine them for application across tactical ground vehicles for the U.S. Army and others.

With its recently-opened production facility in Concord, North Carolina, GM Defense has its sights on future tactical-vehicle needs for the Army and other customers. From start of construction to vehicle production, the company stood up a state-of-the-art tactical wheeled vehicle manufacturing center in just over 90 days, demonstrating its fast-to-field capabilities and manufacturing prowess. Incorporating some of the latest manufacturing tools into the facility, GM Defense can help ensure the highest level of quality while driving greater efficiencies to support Infantry Squad Vehicle production.

GM is investing more than $27 billion between now and the end of 2025 in a seismic shift toward alternate/electric propulsion in addition to manufacturing. GM Defense plans to leverage those investments to improve the design, manufacture and sustainment of tactical ground vehicles.

The timing of GM’s new investments in manufacturing infrastructure for the commercial market will help GM Defense meet strong expectations for growth in the global, armored vehicle market. According to Fortune Business Insights, this market is expected to grow from about $17.2 billion in 2018 to about $26.1 billion in 2026. The U.S. market is the largest in the world at $6.6 billion, according to the report, Armored Vehicle Market 2019-2026.

“The demand for armored vehicles is increasing due to the frequent occurrence of cross-border conflicts and asymmetric warfare across the globe,” the report states. “The development of military armored vehicle technologies combines innovations from areas such as electronics, weaponry, automotive, and material science…to create products and services that adopt technologies such as lightweight materials for vehicle body/structure, (and) use electricity to power the vehicle.”

Rising demand for light armored vehicles and armored personnel carriers are driving the growth of the combat vehicle segment of the market, according to Fortune. The ISV is a light all-terrain troop carrier for a nine-soldier infantry squad and can be designed to include armor, storage, or different seating configurations depending on customer needs and requirements. It is based on GM’s 2020 Chevrolet Colorado ZR2 midsize truck architecture. 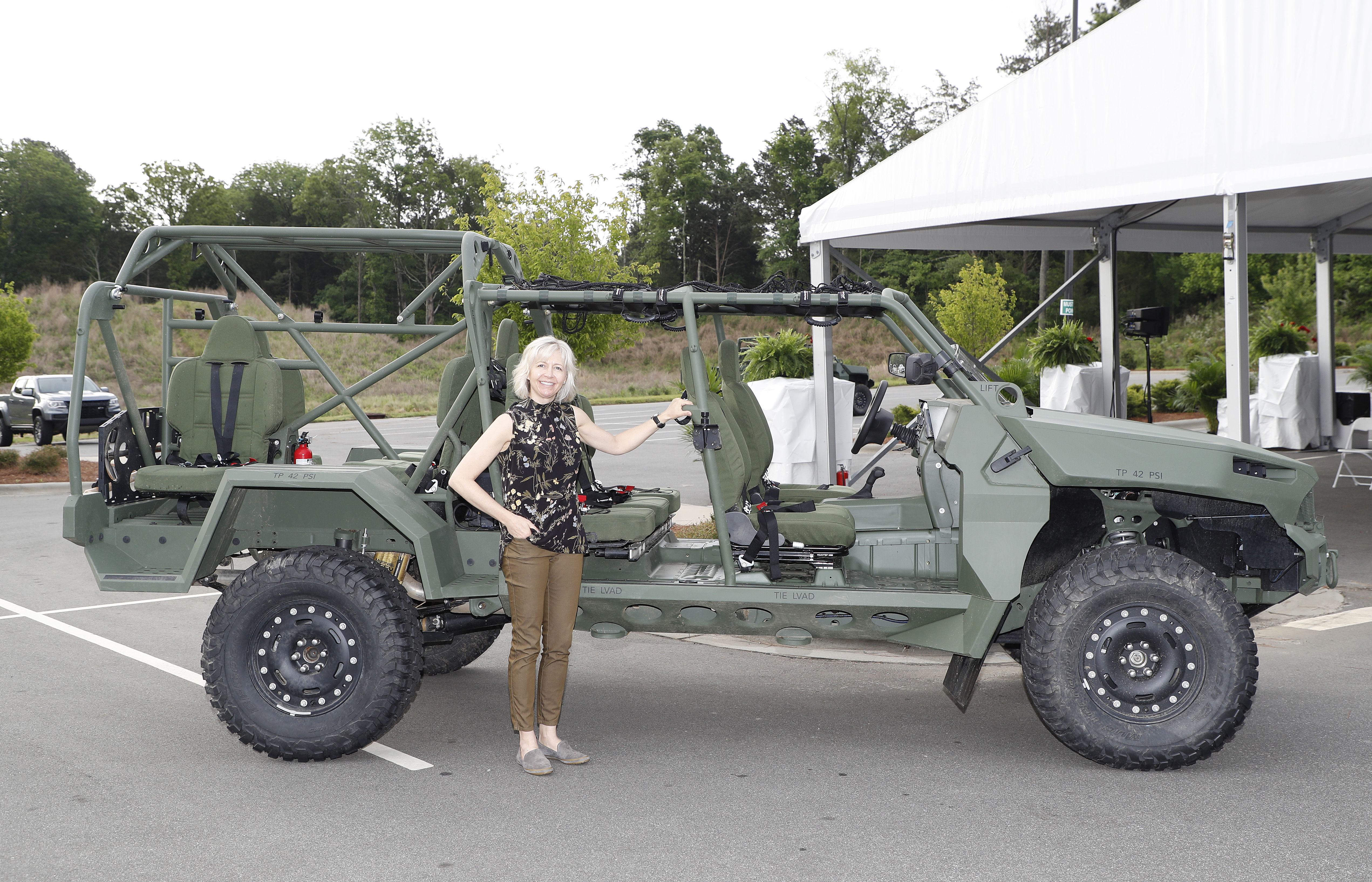 “The financial investment in quality and manufacturing that GM is now putting in place across GM Defense and elsewhere is at a level I’ve not seen at other defense companies,” said Ronda Uhl, chief manufacturing engineer at GM Defense. “I think that’s really important. Something else that I think is incredibly important is our ability to put into place very disciplined actions and processes for quality.”

That’s not just a GM executive entering her third decade in manufacturing with the company saying that. It is bona fides earned and acknowledged by independent market-research firms.

“GM Defense and the entire company use our best, competitive processes from all of our manufacturing sites around the world to build high-quality, highly integrated products,” said Uhl. “Our approach is based on decades of proven production and quality processes that enable us to rapidly scale up or scale down depending on the customer needs. These processes also continuously drive us to find new ways to increase efficiencies and eliminate waste, which can result in cost savings.” 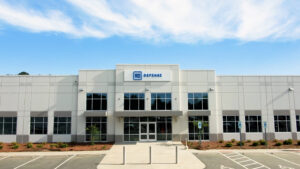 From start of construction to vehicle production, GM Defense stood up its new Concord, N.C. production facility in just over 90 days.

While the ISV is currently in low-volume production, GM Defense can leverage GM’s ability to flex in order to support much higher production rates, while also incorporating our latest manufacturing tools to ensure high levels of quality and efficiency for existing and future customers.

“It drives disciplined action, and I think that gets into what sets us apart,” said Uhl. “The other companies building military vehicles have their own quality processes, but none can say that they’ve honed their defense-production processes with world-class efficiencies that flow from GM’s commercial operations. In addition, the more we build in high levels of quality on the front end of the build, the more potential savings we can help customers realize during vehicle sustainment.”

Quality at GM Defense also derives from hearing and internalizing the Army/military voice about what the drivers, crew, and maintainers want in a 21st century tactical vehicle. That’s especially important in this time where U.S. military forces must sustain operations against increasingly complex threats from around the world.

“Listening to the customer is not a cliché; it’s of enormous importance because the military and government services, for that matter, want to know that you understand their needs,” said Uhl. “It’s not just that you can support their mission the best, but that you can listen to what they want in their vehicle and flex as requirements evolve. The investments in manufacturing advancements that we’ve brought to GM Defense, along with the depth of our engineering and design knowledge, allow us to do that.”

Military services around the world have high expectations for future propulsion systems beyond diesel and gasoline powerplants, including all-electric solutions to hybrid-electric motors, batteries, and hydrogen fuel cells. For example, the U.S. Navy’s FFG(X) next-generation guided missile frigate will be propelled by hybrid-electric power (HEP).

This is the first time that the Navy is putting HEP in a combatant ship like a frigate or destroyer (though the service does use HEP to improve fuel efficiency and maintenance on auxiliary ships in the fleet). Of the four international teams that bid on FFG(X) only the winner—Wisconsin-based Fincantieri Marinette Marine (FMM), a subsidiary of Italian shipbuilder Fincantieri—proposed a hybrid-electric drive system to provide propulsion.

While not as mature as Navy electrification efforts, the Army is also on a clear path to the eventual powering of ground tactical vehicles with hybrid-electric engines and alternative fuels. In Q4 2020, the U.S. Army Combat Capabilities Development Command’s Army Research Laboratory awarded the University of Wisconsin-Madison a four year, $11.5 million contract for research that’s expected to lead to new designs of multi-fuel capable hybrid-electric engines for not only future Army ground vehicles but also for aerial vehicles.

The goal is to answer key questions about integrating battery electric technologies into the fight and hybrid-electric engines in future Army propulsion and power-generation systems, according to Mike Kweon, program manager for the laboratory’s Versatile Tactical Power and Propulsion Essential Research Program, speaking in an Army news release.

In addition to propulsion, the Navy and Army are looking for batteries to provide the additional power generation necessary to support the electrical load of ships and vehicles, respectively. Electric load management will be an important consideration for both services as they’re key to deployment of directed-energy weapons that are now being developed for counter-unmanned aerial systems, for example.

As the Army continues to seek out expertise in electrification, it will find no better teammate for alternative drive solutions than GM, which pioneered the electric car era in 1996 with the first mass produced electric vehicle—the Chevrolet EV1. Since then, the company has pursued a strategy of applying electrification where it will make the biggest possible impact—from GM/Allison hybrid transit buses, the “Project Driveway” fuel cell electric vehicle (FCEV) Equinox, the Two-Mode Tahoe, and Yukon Hybrids. A few months ago, the company unveiled the GMC HUMMER EV—the world’s first all-electric super truck with robust off-road capabilities—and a few weeks ago, the GMC HUMMER EV SUV. Between the company’s most recent revolutionary EV models and the Chevy Bolt EV launched in 2017, GM has produced more than 300,000 EVs.

Today, GM is planning to offer dozens of new EVs and the billions of dollars that it will spend on electric and electric-autonomous vehicle programs through 2025 is more than it will spend on gasoline and diesel products. GM is putting much of that investment into battery technology and by mid-decade, its next-generation Ultium batteries are projected to deliver twice the energy density at less than half the cost of today’s battery chemistry.

Ultium batteries are unique in the industry because the large-format, pouch-style cells can be stacked vertically or horizontally inside the battery pack. This allows engineers to optimize battery energy storage and layout for each vehicle design. Vehicles built on the Ultium Platform are capable of a range up to 450 miles on a single charge with a GM-estimated 0 to 60 mph acceleration in as low as 3 seconds.

GM is investing not only in battery technology, but also in manufacturing facilities to meet commercial needs. GM Defense can leverage these capabilities to meet future military electrification powertrain requirements.

“Enabling a commercial all-electric future also requires the development and introduction of new technologies into our manufacturing sites for components and vehicles,” said Uhl. “The $27 billion that GM has committed to manufacturing new, advanced propulsion sources will enable us to not only execute an all-electric future for the commercial automotive industry, but also to be ready to respond to defense customers and their mission needs for alternative power and propulsion systems.”

Fresh off its first major win in the Army’s Infantry Squad Vehicle competition, GM Defense has let it be known that it is back in the defense business and is bringing forward the commercial capabilities of General Motors to military vehicles. For the ISV and future programs such as Joint Light Tactical Vehicle (JLTV), as well as the Army’s Electric Light Reconnaissance Vehicle program that is currently shaping requirements to meet soldier needs, the Army can depend on GM Defense to deliver and execute in three areas.

* GM Defense is delivering world-class manufacturing capabilities that can scale to any volume production number—both up and down—to fulfill the customer needs.

* GM Defense’s manufacturing processes are driven by disciplined action, execution of proven quality processes, and incorporation of the customer voice throughout vehicle development, manufacturing, and sustainment. This enables us to respond quickly to customer needs to support mission success.

* Few companies in the world are investing as much as GM is in future mobility. The $27 billion commitment through 2025 specifically to facilitate electric and autonomous vehicle development and manufacturing, underscores the company’s commitment to meeting the needs of the marketplace—whether commercial consumers or military customers.