The Centauro II antitank system is one of three major modernization efforts by Italy’s Army. (CIO)

AUCKLAND: Over the past decade, modernization efforts of the Italian Armed Forces have been stymied by ongoing financial uncertainty in the country, even as leadership has espoused the need to transition to Great Power Competition. In particular, Italy’s Army has struggled to make progress on a number of digitally capable fourth and fifth generation vehicles.

Now, however, there may be optimism because the service is at something of an inflection point, with decisions that will define the Army for the next 20 years coming due.

Pierluigi Barberini, Defense and Security Analyst at Italian defense think tank Centro Studi Internazionali (CeSI), told Breaking Defense that over the past decade, the Italian Army has received the least funds for procurement compared to the navy or air force.

“This of course, has an impact in terms of the capabilities that the army can deliver,” he said. “[The Army] are not completely cancelling programs, but they are delaying almost all the programs. This includes new programs and the upgrades of old systems.”

This was visible in procurement plans set out in the Documento Programmatico Pluriennale (DPP) multi-year defense planning document for 2021-23, released in August. The DPP is providing some €73.2 billion ($86.2 billion) over the next three years for overall defense — but the 2021 budget is €24.5 billion, a reduction of 15% on 2020. This will not improve in 2022 with the budget expected to remain static at about €25.1 billion before dropping to €23.4 billion in 2023.

Although these figures are higher than expected it will still see Italian defense spending falling from about 1.4% of GDP to about 1.23% by 2023 moving further away from the 2% that European NATO countries agreed to aim for at the 2014 NATO summit.

The Army is set to receive about €3 billion per year, but consistent low spending levels means that future plans for new fleets of Infantry Fighting Vehicles (IFV), a Medium Multi-Purpose Tactical Vehicle (VTMM), a Light Multirole Tactical Vehicle (VTLM), an amphibious armored vehicle (VBA) and a new special forces tactical vehicle wont be available until close to the end of the decade.

Barberini said that because the changing strategic context and efforts by the Minister of Defense, Lorenzo Guerini, to introduce more financial stability in defense with longer-term funding allocations for equipment procurement he is “a little bit optimistic” that there could be “small positive trends” in the funding of Army modernization programs.

He added that the DPP was an “important step” for the Army towards securing a “higher and more stable allocation of resources over the medium to long term” that can finance new programs, modernization programs and the acquisition of new systems and new capabilities.

But overall Barberini believes that Italian politicians are “starting to understand” the international context is changing, and the security challenges Italy faces means there is a need for investment in defense. Assuming there is stable funding in the future Barberini said that while “some delays will occur in the long term, I expect these programs to be completed.”

So, what programs are likely to see movement soon? Three stand out.

A spokesperson from CIO, a joint venture between Iveco and Oto Melara, which manufactures the VBM, told Breaking Defense that a dedicated contract with the Italian Ministry of Defense would be signed “within a few months.” Following this, the new items in the equipment package for the VBM PLUS will be designed and 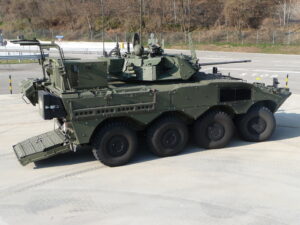 The VBM is getting a midlife upgrade. (CIO)

tested within a three-year time frame.

Meanwhile CIO is working with the Italian Army to provide a Command Post version of the VBM for its 1st and 2nd Brigades and a Mortar Carrier version for its 2nd Brigade.

This is where the delays show: although the 1st Brigade contracts were signed in Dec. 2007, only 229 of the 249 vehicles have been delivered. The 2nd Brigade deal, signed in 2014, has yet to deliver a single unit. it is expected that there will be about 20 Command Post variants and 10 Mortar Carrier along with a first tranche of at least 100 Combat PLUS vehicles — now expected sometime in the 2030-2032 range — that will contribute to a total of over 300 vehicles.

The VBM Combat PLUS program appears to have replaced an earlier Evolved, or EVO, project for an advanced IFV with improved mine and IED protection and increased firepower by virtue of a 30mm gun in an unmanned turret. The CIO spokesperson said that EVO was cancelled due to “financial restraints” and an Army “procurement priority shift.”

The spokesperson added that as a result the PLUS variant “will not represent a tech ‘jump’ but an upgrade” to the current vehicle fleet to “overcome incoming shortfalls of spare parts procurement and broadly in maintenance/services.”

Centauro II antitank vehicle: It is expected that options for a further ten Centauro II (3.0 configuration) tank destroyer vehicles will be exercised by the MoD to add to the 86 already ordered at the end of 2020. Production of these vehicles has already started at CIO, and will be delivered from 2024-30.

Overall, the Army plans to buy 150 Centauro II vehicles, including a first tranche of 10 configuration 2.0 variants, the second tranche of the 86 already ordered plus ten new 3.0 variants under contract, and a third tranche of 44 vehicles – also in 3.0 configuration – that CIO expects to be ordered in the coming years.

Delivery of the tranche one 2.0 vehicles started in February and will be completed next year. The CIO spokesperson said that the 2.0 variant is a technology and operational “jump” compared to the earlier Centauro I vehicles and the 3.0 includes a further development of the weapon system. 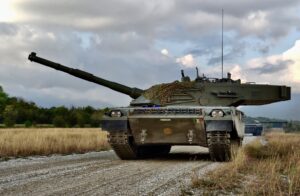 The Ariete is the main battle tank for Italy. (Italian MoD)

Ariete Main Battle Tank: Work on a mid life upgrade for the Ariete is underway, with prototype vehicles due to be tested by the Italian Army and complete delivery in 2023. “We are now conducting subsystems development, such as: engine upgrade to state-of-the art technology with significant increase in performance,” the spokesperson said.

The spokesperson said that the upgrades would keep the MBT fleet operational until 2040, depending on future decisions about a new IFV and MBT.

The MoD has allocated €262 million under the DPP, which is not enough for all 125 MBTs, so further funding is expected. Or, Barbineri suggests, “Maybe some of them will not be upgraded.”