TEL AVIV: Across the world, there is a growing sense that land-based forces need to begin relying heavily on unmanned combat vehicles – and industry is ready to chip in.

Israeli firms, bolstered by serious interest from the Israeli Defense Force, are hoping to cash in on the growing interest. Firms are moving quickly to plug R&D money into this new sector, while the IDF is working on acquiring a variety of new systems – largely classified due to the payloads they carry.

While the firms may not be able to advertise exactly what they’re putting on their systems, the hope among executives is that seeing the systems in use by the IDF will lead to greater interest abroad. Sources in industry believe the potential market for ground vehicles rivals that of the already huge unmanned aerial vehicle sector.

One catch specific to Israeli firms: under the last defense agreement between the US and Israel, the amount of Foreign Military Financing dollars that Israel can use to procure Israeli-made systems is shrinking year over year and will be gone entirely by 2028.

As a result, Israeli firms are looking to partner or procure American companies and produce their unmanned ground vehicles in the US — a loophole that would allow FMF monies procure the systems for domestic use.

A recent example: Elbit systems, one of Israeli’s biggest defense industries, has increased its funding for it’s American subsidiary, establishing a new, 135,000 square foot facility near Charleston, South Carolina. That facility will be home to Elbit’s Ground Combat Vehicle Assembly and Integration Center of Excellence, with operations expected to begin in third quarter 2022.

One item that could be built under that new paradigm was revealed last month, when Elbit and another Israeli firm, Roboteam, launched a new design known as the ROOK, a multi-payload military 6X6 Unmanned Ground Vehicle (UGV). In announcing the design, the companies hyped what they call a built-in autonomous suite. That capability should allow ROOK to navigate rough terrain in order to delivery supplies, evacuate personnel as needed, perform intelligence gathering – the companies mention the potential of on-board VTOL systems – or operate as a remote weapons platform.

The new design is capable of carrying up to 1,200 kg of payload, with a ground clearance of 24cm, with power for eight-hour operations and a max speed of around 30km per hour. Notably, the companies believe the control unit can be operated by one individual – and that individual can actually control a handful of ROOKS at once.

Roboteam, of which Elbit Systems holds 25%, is a good example of how Israel’s domestic focus on unmanned systems is paying off on the international market.

The company has sold hundreds of systems to the IDF, the US military and the British and French armies to date. Among other things, it provided the IDF with a tiny 2.5 kg robot that travels on chains and can first break into houses and underground spaces and transfer intelligence backward. The company also produces the Rooney, a small system carried by a soldier, which can carry a cargo of several kilograms, patrol or be sent on suicide missions while carrying cargo.

Elad Levy, CEO of Roboteam, told BD that since 2015 the US Air Force has spent $25 million to procure 250 of the company’s MTGR lightweight ordnance disposal robots, largely used to prepare landing sites. The company is in the process of trying to sell its Probot 4X4 vehicle to the US as well, with Levy claiming the system is “currently [being] evaluated by some US special forces units.”

Levy added that the company is using a number of American subcontractors and Is looking to expand their number. The company is set up in such a way that while R&D is done in Israel, actual production happens in the US, in a move that the company hopes will make it easier to tap into American-supplied Foreign Military Financing dollars.

Meanwhile, existing Israeli designs continue to be marketed globally, including in Europe.

In mid-Nov., Elbit systems demonstrated its unmanned systems to the Royal Netherlands Army. The demonstration included a scenario where three Thor VTOL mini-UASs and a Probot ground vehicle performed missions together; the systems worked as swarms and performed various ISR tasks, along with traveling to preset targets.

“We focused on demonstrating the capacity of autonomous swarms to leverage mature integrative AI and algorithms,” said Gil Maoz VP of  Elbit systems C4i and Cyber, said in a company statement after the demo.

Israel Aerospace Industries (IAI), the country’s largest defense contractor, is unsurprisingly also invested in unmanned ground vehicles. Recently the company unveiled its new generation of systems, known as the Rex MK 2. The company claims the system is “semi-autonomous,” with the ability to perform some operations on its own; it can also be guided by humans remotely through an electronic controller.

Officials from IAI said the vehicle was built to support Israeli military ground forces in different levels of fighting. It can carry equipment and supplies, gather intelligence and open fire at nearby targets.; it also comes equipped with two machine guns and a series of cameras and sensors. 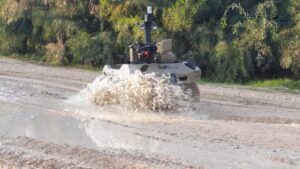 Another IAI system, the Jaguar, is seeing live action closer to home. The IDF has now confirmed that they are using the Jaguar along the Gaza border as part of an operational assessment. Should everything go well, the IDF plans to equip the system with more sensors and weapons. (In an interesting note, the IDF states that the Jaguar has a way to “neutralize” classified parts of its design should it be captured; it also can send a GPS notification if an aerial strike is required to destroy it.)

Rani Avni, deputy GM land systems division and head of robotics and autonomous systems at Elta, called the Jaguar the most advanced design of IAI’s unmanned ground systems. He told Breaking Defense that the sensor package on the Jaguar “is tailored to the user’s operational needs and can include optical and radar sensors.”

How a Modular Testing Model Increases Efficiency and Scalability