“We began to increase presence in the US market some years ago but with limited success. Now we are working on it full force,” Levy said, adding that the company is working on “enhancing the scope of our work with existing partners and creating new companies.”

Levy noted the appointments last year of Amir Geva as IAI’s executive vice president of North America, responsible for the country’s activities in the region, and of Oren Poleg as President and CEO of IAI’s subsidiary IAI North America. Both men were former officials in Israel’s embassy in the US. AI also currently does work in the US through Stark Aerospace and ELTA North America, but Levy said he envisions a “network” of US subsidiaries and partners that would allow IAI to increase production for the US and other markets. 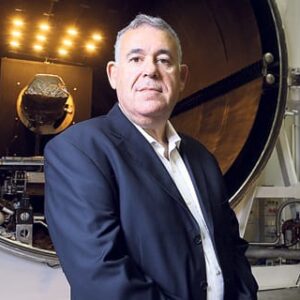 “We want to focus on radars, UAVs and different missiles,” he said. “A lot of highly advanced technologies will be transferred to the current and new American partners to make the best systems.”

Last year was a record year for IAI, seeing approximately $4.48 billion in sales, up from $4.18 billion the year prior, and an increase in net income to about $148 million. At the end of 2021, the company’s backlog was $13.4 billion, compared to $12.6 billion in 2020. Levy said he believes that in working with the US, Israel’s position as an agile, “startup nation” will provide for innovative solutions for complicated defense problems.

Beyond working with subsidiaries, Levy said IAI also wants to increase its business with American defense giants like Lockheed Martin and Boeing. Boeing is already manufacturing subsystems for IAI’s Arrow 3 ballistic missile interceptor, and IAI is making parts of Boeing’s F-15 fighter. Meanwhile, IAI makes wings for the Lockheed Martin F-35 and parts for its F-16.

But there’s an added wrinkle there: IAI plans to switch the development partners for the Arrow 4 from Boeing to Lockheed Martin, sources told Breaking Defense. Levy declined to discuss the switch directly, but said the Arrow 4 is a “totally different system” from the Arrow 3.

“IAI is working with American companies on many programs, including missile defense,” he said. “At this time, we are in negotiations about the production of the Arrow 4 and the Barak MX [missile interceptor] in the US.”

The matter is now in the hands of the Israeli ministry if defense, sources told Breaking Defense.

Levy also declined to go into detail about a surprising recent memorandum of understanding between IAI and an Indian defense firm, Hindustan Aeronautics Limited (HAL), to convert multi-mission tanker transport (MITT) in India. “I’m sure that our vast expertise [in aircraft conversion] will be valued by the potential customer,” he said.

In the rest of the interview, Levy talked about the effect Russia’s invasion of Ukraine has had on the defense industry, some new historic business in the Gulf and troubles related to the COVID-19 pandemic. (Lines in italics were not part of the interview but have been included to provide context for the reader.)

The war in Ukraine has already resulted in new evaluations by countries in Europe regarding their defense needs.

Q: Do you think that countries that until recently purchased Russian-made weapon systems will become interested in the systems you offer?

A: This may happen. The world weapons market is changing and we have some very advanced, in some cases combat-proven technologies. I expect that countries that so far purchased Russian-made systems will approach us.

Shortly after Israel signed the Abraham Accords with some Gulf countries, the interest of those countries in Israeli defense systems became a main issue. Breaking Defense has reported that some Gulf nations, feeling threatened by Iran and Iran-backed groups in the region, have shown great interest in Israeli early warning radar systems, for instance.

Q: Are the Gulf states, mainly the UAE, potential customers for IAI systems?

A: The relations between Israel and the Gulf states are being built slowly but surely. I can say with confidence that we will sell some of our systems to these countries.

Q: Has IAI been affected by supply chain problems that are the result of the COVID-19 pandemic?

A: As an OEM [original equipment manufacturer] company, we faced certain problems, especially for small components, but we found ways to cope with it, and in spite of problems created by the pandemic, we succeeded to supply our systems to customers all over the world in time. The record 2021 financial results show it.

Hypersonic missiles in recent months have become the hottest issue in the defense market. It seems that this weapon will be in big demand in the coming years.

A: These missiles are intended for attack and defense, and this reflects on different sensors. I cannot say more about this issue.

Source
Interview: With radars and UAVs, Israel’s IAI diving ‘full force’ into US market is written by Arie Egozi for breakingdefense.com