Both men have have been with HII for more than 10 years after it was spun off Northrop Grumman in 2011. Since then the company has become one of the county’s premiere shipbuilders, boasting a $48 billion backlog and providing the US Navy fleet’s iconic aircraft carriers and amphibious warships as well as partnering with General Dynamics Electric Boat to deliver the Virginia- and Columbia-class submarines. 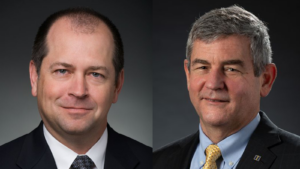 Chris Kastner, left, and Mike Petters will both begin new roles with HII in March 2022. (Photos courtesy of HII.)

More recently, HII has been fighting to carve out market space in the Navy’s future unmanned fleet. The company has made several recent acquisitions of unmanned technology companies and is constructing a new campus to focus solely on unmanned capabilities, but will likely face stiff competition as the bar to entry in unmanned technology is much lower compared to building aircraft carriers.

Also in the background is the Marine Corps’ Light Amphibious Warship. The Navy last summer awarded five companies contracts to begin developing designs for that program, whose purpose and stature are very different than the Navy’s traditional big deck amphibs. But given HII’s grip on the Navy’s current amphib portfolio, any movements it makes on that program are sure to be closely watched.

Past Cyber Operations Against Ukraine and What May Be Next

Past Cyber Operations Against Ukraine and What May Be Next