Soldiers prepare a vehicle for turn-in at the Modernization, Displacement, and Repair Site at Joint Base Elmendorf-Richardson. (Katie Nelson/US Army)

WASHINGTON: A little known entity inside the Army has a grandiose task: prepare units across the service for the massive amounts of next generation capabilities the service plans to deliver to soldiers in the next decade.

To make the influx of new technologies possible, the service will rely on new Modernization Displacement and Repair Sites (MDRS) to churn out decades-old equipment from units to clear space for new capabilities.

“This is really setting the conditions for the next wave of modernization that’s going to come into the Army,” said Maj. Gen. Chris Mohan, commanding general of Army Sustainment Command, who spoke with Breaking Defense on the periphery of the Association of the United States Army conference last week.

The new effort reached full operating capability in April this year and has begun removing legacy equipment from units at 14 Army posts across the country. According to Mohan, ASC has 85,000 pieces of equipment to receive from soldiers, down from 130,000 during its initial year of operation.

The Modernization Displacement and Repair Sites are a part of the Army’s Regionally Aligned Readiness & Modernization Model (ReARRM) effort through which the service wants to set up more predictable cycles for when soldiers train, modernize and deploy. MDRS is one of the first steps in that and 14 sites are “focused” on “setting the conditions for ReARMM,” Mohan said.

The service is in the midst of a massive modernization effort, replacing everything from weapons to helicopters. At AUSA, Army Chief of Staff James McConville highlighted that 24 of the service’s “31+4” modernization priorities would reach prototyping by fiscal 2023, but many of those programs still have delivery schedules that are years down the road. Regardless, the service has to be prepared for when new tech arrives.

“After 20 years of war, we have a tremendous amount of excess,” Mohan said, adding later “the constant turn and churn of units and equipment back and forth into the Middle East has allowed us to bring back and hold a lot of equipment we need to get rid of.”

For example, as the Army fields the Joint Light Tactical Vehicle to replace Humvees, a Modernization Displacement and Repair Site takes possession of the Humvee. The site also worked to reduce the number of M-9 pistols as the service fields M-17s. At the site, excess equipment may be shipped to another unit that needs it, sent to a repair depot or given to the Defense Logistics Agency Disposition Services location for disposal. 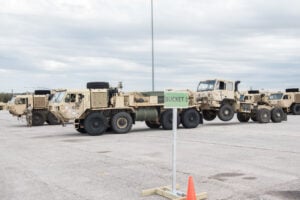 The site at Fort Stewart recently worked with a brigade of the 3rd Infantry Division on a “rather large fielding” of tanks and Bradley Fighting vehicles, Mohan said. The MDRS blocked off time and space for the unit to come to the yard and transfer their old equipment. Mohan said the unit’s leadership signed an operations order and treated it as such.

“That was kind of like a rehearsal for ReARMM for us. We’re going to be doing that across the Army,” Mohan said.

The process works like this: Army Materiel Command has a computer system that identifies excess equipment inside units and produces recommendations for where it can be moved. Army Sustainment Command will then ask the unit to validate that it can lose the identified legacy equipment and will then direct the movement of that equipment to an MDRS.

After the first year of operation, Mohan said one primary lesson is that the service must ensure that the sites have adequate capacity to handle the amount of equipment each will process during the upcoming year. He added that ASC also needs to fully understand how long the process actually takes, from first identification of excess equipment to processing it out of the site.

The most important aspect, Mohan said, is that commanders prioritize taking their units to an MDRS yard.

“The most important thing is it is absolutely essential that we’re in the back pocket of the installation commander or the division commander, because they have to carve out and make it a priority for the units so that the units can get turned in,” Mohan said.

To ensure modernization cycles are efficient and effective, Mohan said that division commanders have stressed to him the importance of having established processes in place. He said the MDRS efforts target fiscal 2023 as the year they need to fully be prepared, the same year McConville said many Army modernization prototypes hit the street.

“As we get better at this and we get further along, what we’ll be able to do is … stop focusing on pieces of equipment, but [focusing] with units and say, ‘Okay, this unit is going into their modernization cycle.’ We will have set the conditions so that we can do it en masse.”

Top Considerations to Make When You’re Going Off the Grid

Top Considerations to Make When You’re Going Off the Grid