WASHINGTON: The Space Force program to enable jam-resistant GPS access is facing yet more delays, according to the latest report from the Pentagon’s operational tester, caused by the same old problems that have been troubling the effort for decades.

Both the infamously troubled OCX ground control system for the newest GPS III satellites, and efforts to build M-Code radios/receivers for troops, vehicles, planes and ships remain far behind schedule, according to the report by Director, Office of Operational Test and Evaluation (DOT&E), published today [PDF].

“Full control of modernized civil and M-code signals and navigation warfare functions, as well as improved cybersecurity, continue to be delayed due to ongoing development and deployment delays of the next generation Operational Control System (OCX), along with delays in the fielding of M-code capable receivers for use by the U.S. and allied warfighters,” the report says.

The M-Code signal is a more powerful and encrypted signal to help military users overcome jamming and protect against false GPS signals being used to spoof users by misdirecting them.

The long-delayed OCX software being developed by Raytheon Technologies is required to command and control the most modern GPS satellites. Those are the GPS III sats, five of which are now on orbit and built by prime contractor Lockheed Martin, which can broadcast an even more powerful M-Code signal.

In particular, DoD’s inability to field radios and modern receivers to access the signal, being developed under the Military User GPS Equipment (MGUE) program, has been one of the banes of the GPS program for more than two decades — as reported ad nauseam by the Government Accountability Office (GAO) and taken to task in the DOT&E report.

The MGUE effort has two tiers: MGUE Increment 1 to develop the baseline computer equipment (chips and cards) for initial integration with Army Strykers and Marine Corps Joint Light Tactical Vehicles, as well as for the Air Force’s B-2 bombers and the Navy’s DDG-class destroyers; and MGUE Increment 2 to develop smaller, more modern equipment for newer kit, in particular the Joint Common Modernized Hand Held Receiver. Space Force provides the MGUE computer chips and cards to enable M-Code for users, while the individual services have to develop and fund the actual radio/receiver equipment for their weapon systems and personnel.

It adds that as a result, the Army and Marines “have turned to commercially available, MGUE-derived M-code receivers to continue meeting PNT [position, navigation and timing] requirements. Those systems will undergo operational testing outside of the MGUE Increment 1 program of record.”

In other words, DoD has had to spend extra money to get capability that it already has been spending oodles on. The Pentagon’s fiscal 2022 budget request included $1.8 billion for all three GPS segments, which of course doesn’t include the individual service budgets for building radios.

The DOT&E report notes that while the current plan is for the MGUE Increment 1 aviation/maritime equipment to be first tested on the B-2 in 2024, “given the sundown plans for the Air Force to retire the B-2 in the early 2030 timeframe, any future schedule slips may warrant the Air Force to select another platform to support the planned integration.” 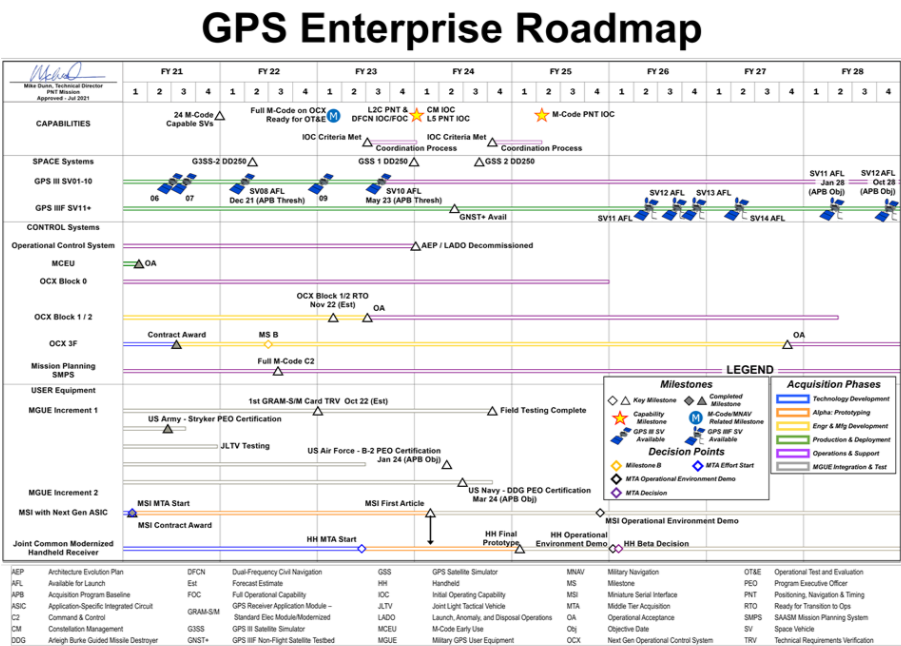 A July 2021 version of what Space Force calls the GPS Enterprise Roadmap, as reported by GPS World, shows that plans for all three GPS segments — the satellites, the ground control systems and the user equipment — have been delayed from the previous schedule. Space Force has yet to respond to a request for comment on the chart.

Last June, Space Force had predicted that initial operating capability for all three segments would come in fiscal 2023.

The July chart, however, puts IOC for M-Code to be used for positioning, navigation and timing in the second quarter of fiscal 2025. (It is important to remember that back in 2001, IOC was envisioned for 2009.)

As for OCX for the GPS III sats, the chart shows that rather than entering IOC in fiscal 2023, that Space Force will declare “operational acceptance” (OA) at the end of the second quarter of that year. OA is a term that means the system in question hasn’t made it all the way through testing, and thus IOC cannot be declared.

“That does not mean that M-Code has achieved initial operational capability, only that it has been demonstrated that the ground control station can command the M-Code signal transmitted from the satellites and send it to user equipment,” a US official stressed. “The next step is demonstrating that user equipment works in all domains; ground, aviation, and maritime.”

“The services are responsible for acquiring the user equipment,” the official noted, and up to now have had “limited plans to do so.” Instead, they remain “years away from having large quantities of it.”