PARIS: Just as the US military has come to understand that the ‘’long wars’’ of Iraq and Afghanistan diverted forces from training for future full-spectrum peer-to-peer conflicts, the French military has been increasingly warning about the risks involved with two decades of heavy focus on overseas operations at the expense of incoming threats.

So it is no surprise that in his first national assembly testimony as Chief of staff of the French armed forces, Gen. Thierry Burkhard in October forcefully stressed the necessity for France to ‘’win the war before the war’’ and to be ready for high intensity warfare.

How that actually happens, of course, is the bigger question.

The current 2019-2025 program law, meant to catch up with the renewal of French armed forces equipment across the board, has been considered by many to be a good start towards refocusing France’s military. In an Oct. 7 presentation of the Army new capabilities at Versailles-Satory (referred to as PCAT 2021 for Présentation des capacités de l’armée de Terre), the new Chief of the French Army, Gen. Pierre Schill, referred to the current process of transformation as the “most important modernization undergone since World War II.”

However, given the recent evolution of the geostrategic environment, French military chiefs all advocate that there is a need to rebalance quality with quantity. No future peer-to-peer conflict will be won without operational superiority, they argue, which today has to mix modern high technology, digitalization, AI, robots while maintaining a more traditional mass of people and equipment.

In a recent study by the French think tank IFRI (French Institute for International Relations) entitled “Mass in the French armed forces: a challenge for high intensity,” the authors highlight the fact that “between 1999 and 2014, European countries have shrunk their tank fleet by 66%, their fighters’ by 45% and their surface fleets’ by 25%.”

The end-result is that Operation Barkhane, an operation meant to fight terrorism in Sahel that has run since 2014, with 5,100 French troops and 76% of French Army equipment deployed in operation, tends to divert resources and time away from properly preparing for larger and tougher contingencies. In the past six years, the French Army has been losing two war-damaged vehicles a month and having a hard time keeping readiness rates at the required levels.

If applied in a context of high intensity peer-to-peer conflict, such a level of attrition could lead to some real nightmare scenarios, according to the FED 2021 (for Forum Entreprise Défense), held on this issue at Versailles-Satory Army base Oct. 13-14. When the Army did its early planning for “a symmetric division level engagement for a period of six months,” it found very strong and rapid attrition rates with “36% of the deployed equipment destroyed each month” and — not surprisingly — the inability of the support system to repair and provide spares fast enough to be able to win.

”Today the French Army is beautiful, but in a high intensity conflict, would it be able to hold beyond 48 hours? High intensity would imply potentially very tough battles which could last between 72 to 96 hours and which we are not allowed to lose,” he said at FED. Support and maintenance in such an environment will have to face access denial and enhanced insecurity, he said, adding, “On the frontline it will be necessary to bring back means to the force as fast as possible, and in the rear it will be necessary to remain credible and competitive over time.”

Laval compared the impact of high intensity combat on equipment to the one it could have on human losses, with mass casualties affecting both human and material resources. ”Today a maintenance unit may deal with about 20 equipment immobilized because of lack of spares. In a high intensity scenario, you are talking 40 or 60 damaged pieces of equipment, overwhelming that same unit.’’ To deal with such a forecast, the general identified several potential reforms, including:

Combined, it’s becoming clear the French military is reflecting on ways to gain strategic depth, including going back to the good old Cold War stock policy and industrial mobilization initiatives, while maintaining its current deployments and ability to fight against asymmetric threats.

Several paths have been identified as a way to start such a process. The director of operations of the Army maintenance Directorate (SIMMT for Structure intégrée du maintien en condition opérationnelle des matériels terrestres), Gen. Olivier Cornefert, pointed out during the FED seminars that the goal was to keep improving the readiness rate with an objective of 72% in 2022 and 75% in 2024 and a yearly volume of regeneration of 1,600 equipment in 2022 and 1,800 in 2024. In order to achieve such “depth,” the solution is to rely increasingly on the defense industrial base. “The private sector should inherit 40% of the hourly industrial maintenance workload by 2024-2025,” he said. 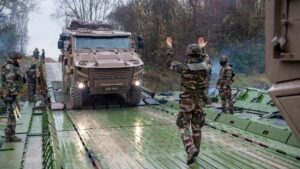 The French defense industrial base includes eight large firms and 4,000 small and medium-size firms and is worth €28.5 billion ($32 billion) in terms of revenue, 80% of which is dual-use. According to experts, in case of 1914-like mobilization scenario, activating this dual-use sector would be particularly vital for a surge. Of course, there is still a long way to go given France’s import dependencies and the current long cycles of production. (Currently, it can take three years to build a single missile.) Hence the need for a thorough supply chain analysis, which the COVID-19 crisis has rendered even more relevant.

The latter has however been relatively good news as far as the responsiveness of defense industries and military overall resilience have been concerned. According to Gen. François Mestre, director for industrial affairs at DGA, the French procurement agency (DGA stands for Direction générale de l’armement), Even though the Covid crisis led to a 20% drop in French GDP, industries performed rather well with only a two week period of supply chain issues for the armed forces thanks to a constant dialogue.”

‘’Winning the war before the war’’ not only means preparing to deter and to be ready on D-Day, it also means being able to deal with the new, large variety and mix of symmetric and asymmetric threats. While France has always tried to invest in the ‘’full spectrum’’ of capabilities and be present in multiple theaters from Europe and Africa, to the Middle-East and the Indo-Pacific region, the emerging threats are increasingly hybrid, as the latest Belarus-Polish stalemate illustrates.

New skillsets, whether in the cyber, space or information fields, are being pursued in order to deal with the ever blurry concept of thresholds — the infamous ‘’grey area’’ — and having the ability to de-escalate from contest back to competition is considered the key to prevent high intensity wars to occur.

The French chief of the armed forces describes this paradigm shift as a transition from the old triptic “peace-crisis-war” to “competition-dispute-showdown.” For him, one of the best ways to remain or regain operational superiority over the enemy is to train with allies in high intensity scenario-based exercises, such as Orion 2023, a major joint exercise planned in Champagne-Ardenne with US, Belgian and maybe British armed forces.