FORT BRAGG, N.C.: At the front of the operations center, a Coast Guard representative pointed a digital thermometer at a ballistic vest rigged with a cooling system, calling out the falling temperature of the pack as cold water flowed through it.

The temperature of the pack dropped from 71 degrees to about 52 degrees in 20 seconds, proving that Air Force 1st Lt. Justin O’Brien’s prototype for an armored cooling vest has merit.

The value of such a system is obvious for an Army that frequently finds itself in hot climes, whether its the deserts of the Middle East or just here in Fort Bragg in the summer — not least to Lt. Gen. Michael Kurilla, commander of the XVIII Airborne Corps.

The idea, Kurilla said, has “tremendous potential,” even if he’s skeptical about how it would work in places where soldiers don’t have ready access to ice to fuel the system.

“There are [more] tests that need to be done,” O’Brien acknowledged.

Kurilla’s words had weight because he, like the Coast Guard representative, served as a panelist at the most recent Dragon’s Lair event, the Army’s XVIII Airborne Corps innovation competition styled after ABC’s hit show “Shark Tank.”

But instead of presenting new business opportunities to a panel of uber-rich, sometimes snarky business titans, servicemembers showcase innovative projects — developed in their spare time with the hope of improving the lives of soldiers — to a panel of judges from across the joint force, industry and academia.

“It is about elevating ideas that are trapped somewhere in an organization,” Kurilla said during the awards ceremony.

Set in an operations center at Fort Bragg, the XVIII Airborne Corps hosted its most recent Dragon’s Lair innovation competition on Dec. 6. Breaking Defense was invited to sit in on event, the sixth iteration — or “episode” — since the effort began in Fall 2020.

For years, military leaders have said that innovators lie within the ranks of the over 2 million active duty and reserve troops, but the Pentagon has struggled to identify that talent or give soldiers, sailors, airmen and Marines a forum to show off their best ideas.

So, at Fort Bragg this week, soldiers, sailors and airmen pitched a range of projects aimed at everything from increasing digital efficiency of the military to saving soldier’s lives on the battlefield. This was the first time of the competition that included participants from across the military services and joint panelists. The sixth episode received over 100 proposals, narrowing those down to eight finalists. (The creator of one finalist proposal wasunable to attend.)

While the seven ideas presented spanned technical maturity, the competition ended in a three-way tie for the first time in Dragon’s Lair history, between the novel cooling system, a new restraint born out of tragedy and a digital model to help in urban warfare. Though the winners get a four-day pass, their pick of an Army training school and a Meritorious Service Medal, the next step is for the Army to prove the projects can work in the wild.

“We are at the moment developing a glide path for full implementation across the corps for each winning innovation,” said Col. Joe Buccino, spokesperson for the XVIII Airborne Corps.

‘A Problem Here That Needed To Be Solved’

After nearly two decades of the war in the Middle East and nearly three centuries of training in America’s deep south, the joint force is still on the lookout for solutions for combating heat exhaustion.

“As an officer, the members of my team were also suffering the same … heat burdens that I relate to and I thought that there’s a way that we could attack this,” O’Brien told Breaking Defense in an interview after his presentation. “There’s a problem here that needed to be solved.”

O’Brien, who described himself as “engineer-minded,” pointed to the summertime temperatures soldiers face at Fort Bragg, which hits 90 degrees daily, plus humidity. In 2020, there were 1,667 cases of heat illness, including 475 heat strikes among active duty military. 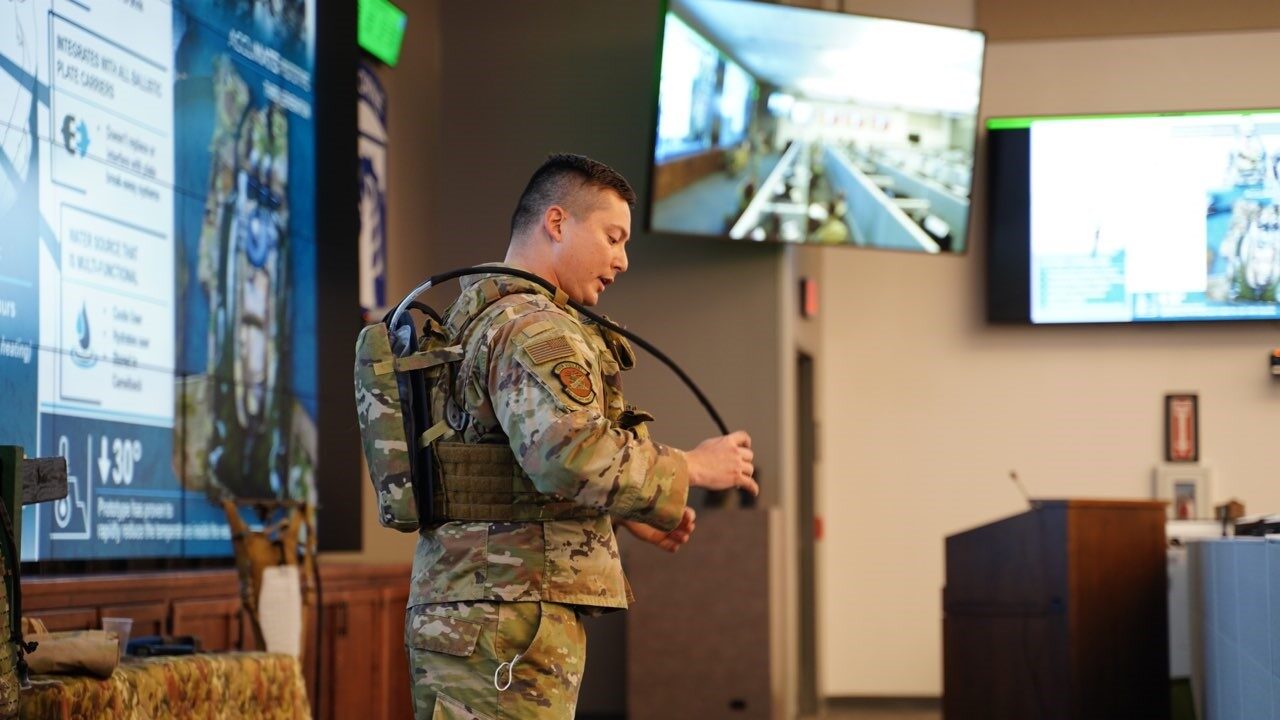 O’Brien’s solution looks similar to a CamelBak and is worn like a backpack, but with a chill pad on the inside of the vest. The system is designed to be integrated into ballistic plate carriers and is rigged so ice water flows from the water pouch into the pad, cooling the soldier’s torso. The prototype can produce cool temperatures for up to 14 hours, according to O’Brien. And in tests in 2019, he said the cooling system reduced the temperature of the vest by 31 degrees.

The battlefield limitation, of course, is what happens after 14 hours and when troops don’t have access to ice. O’Brien said the vest can still provide “significant cooling” with water from a drinking fountain, but requires further testing to see how it can work with warmer water.

Even if the cooling doesn’t work with hotter temperatures, the overall system still has benefits, O’Brien said. For instance, it also has a pressurized water line so users can irrigate wounds or fill up canteens.

O’Brien said he came to Dragon’s Lair hoping for “advocacy” for his prototype, currently at what’s called technology readiness level 6, to receive more testing and personnel. Being among the winners is a “huge step forward” for the product, he said.

“What we want now is, we have to develop them a little bit more to get more robust prototypes,” O’Brien said. “And once we’re there we hope to send it to the Army, have them field it, that have them break it and find the weak points, figure out what the members actually want, what they don’t, adapt our system and hopefully come out on the backside with a really solid product that we can approach the industry with.”

According to Buccino, AFWERX, the Air Force’s rapid innovation organization, is interested in O’Brien’s prototype.

A Harness To Save Lives In Rollovers

Another winning project was fairly simple, but potentially critical to soldier safety: a restraint system on a Vietnam-era vehicle to protect gunners in the event of a roll-over.

The idea for the project developed out of tragedy. A few years ago, Sgt. 1st Class Keenan Millay lost a fellow soldier during a vehicle rollover incident. Since then, Millay said “it was personal” to him that vehicles his soldiers sat in had restraint systems to protect them.

When he arrived at Fort Knox, he discovered the M88s in his platoon weren’t outfitted with a gunner restraint system.

“It was obvious, we were gonna have to change that,” Millay told Breaking Defense after Dragon’s Lair. 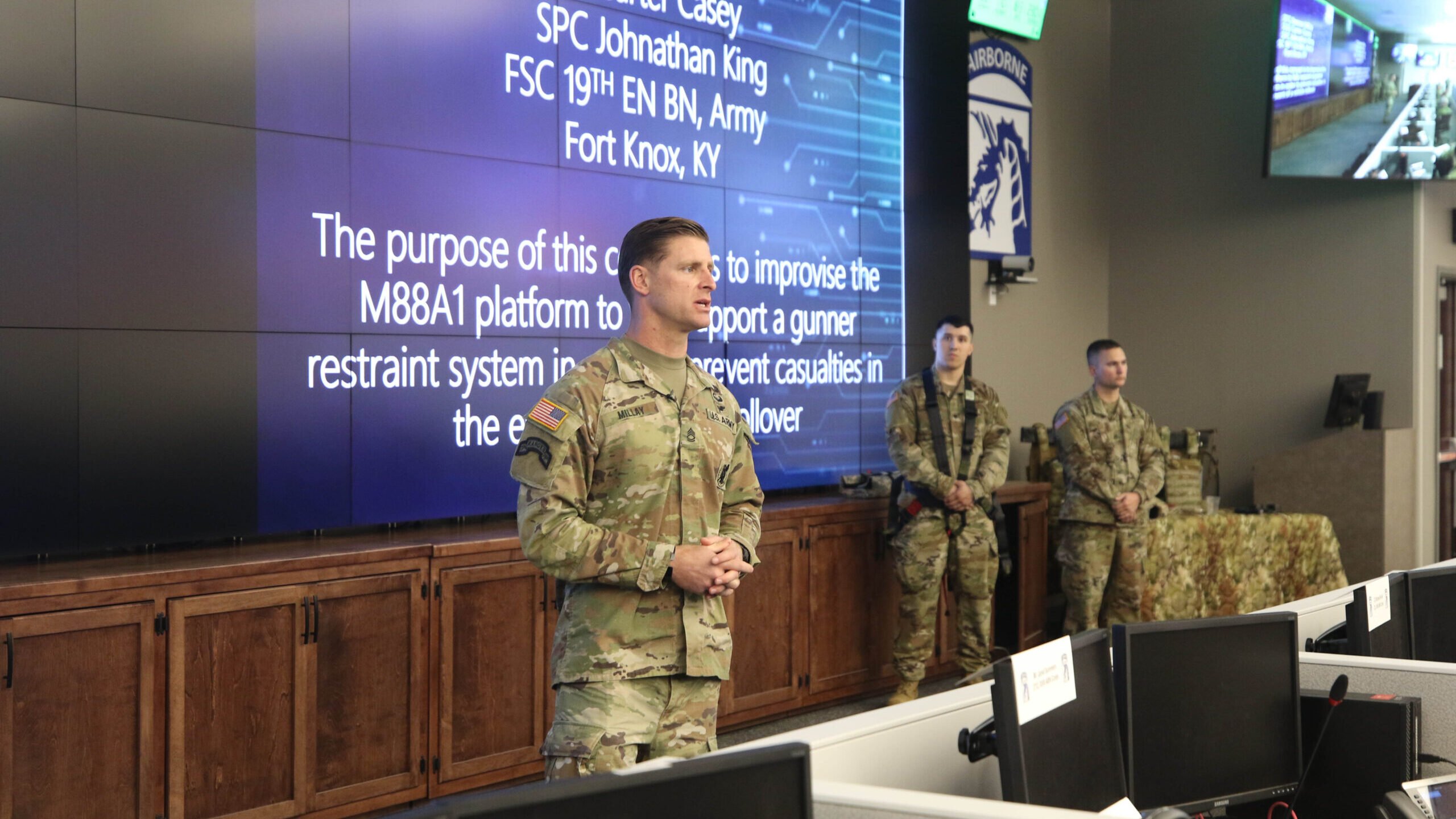 After teaming up with fellow soldiers Staff Sgt. Carter Casey and Spc. Johnathan King, Millay scoured the Army inventory and discovered there wasn’t a restraint system made for the M88. Beyond that, the team also realized that the M88 turret was designed so the gunner had to lean out of the hatch or sit on top of it to have full line of sight when firing — further decreasing safety in a rollover. To address this, the team added a 14.25-inch extension to the turret mount, while bolting down a new gunner restraint system inside the vehicle.

The soldiers told the judges panel that they didn’t have a patent; they had just made the adjustment to improve safety.

Kurilla praised the soldiers for making “common sense” changes to save lives. Their solution could now be implemented across the hundreds of M88s in the service’s inventory and the safety office at Army headquarters is interested in the product.

“The biggest win for us right now is that this is going to get fielded throughout the Army,” Millay said. “We did not do this for any accolades involved in this or any recognition. We did this to save other soldiers and that was it. We didn’t know about Dragon’s Lair until our commander put us in for this.”

In his spare time, 2nd Lt. Christian Relleve of the Army Reserves developed an artificial intelligence/machine learning project designed to predict the interior floor plans of buildings based on their external architecture.

But unsure where to pitch it, Relleve stopped working on it about a year ago. Then came Dragon’s Lair.

“When I heard about the opportunity to do Dragon’s Lair, I was like, ‘Oh, wow, maybe I can revive this,’” Relleve told Breaking Defense.

Relleve said that a building’s external structure can provide insight into the building’s interior layout. For example, he noted that large windows on the side of a building likely mark an office, while small windows likely indicate a bathroom. 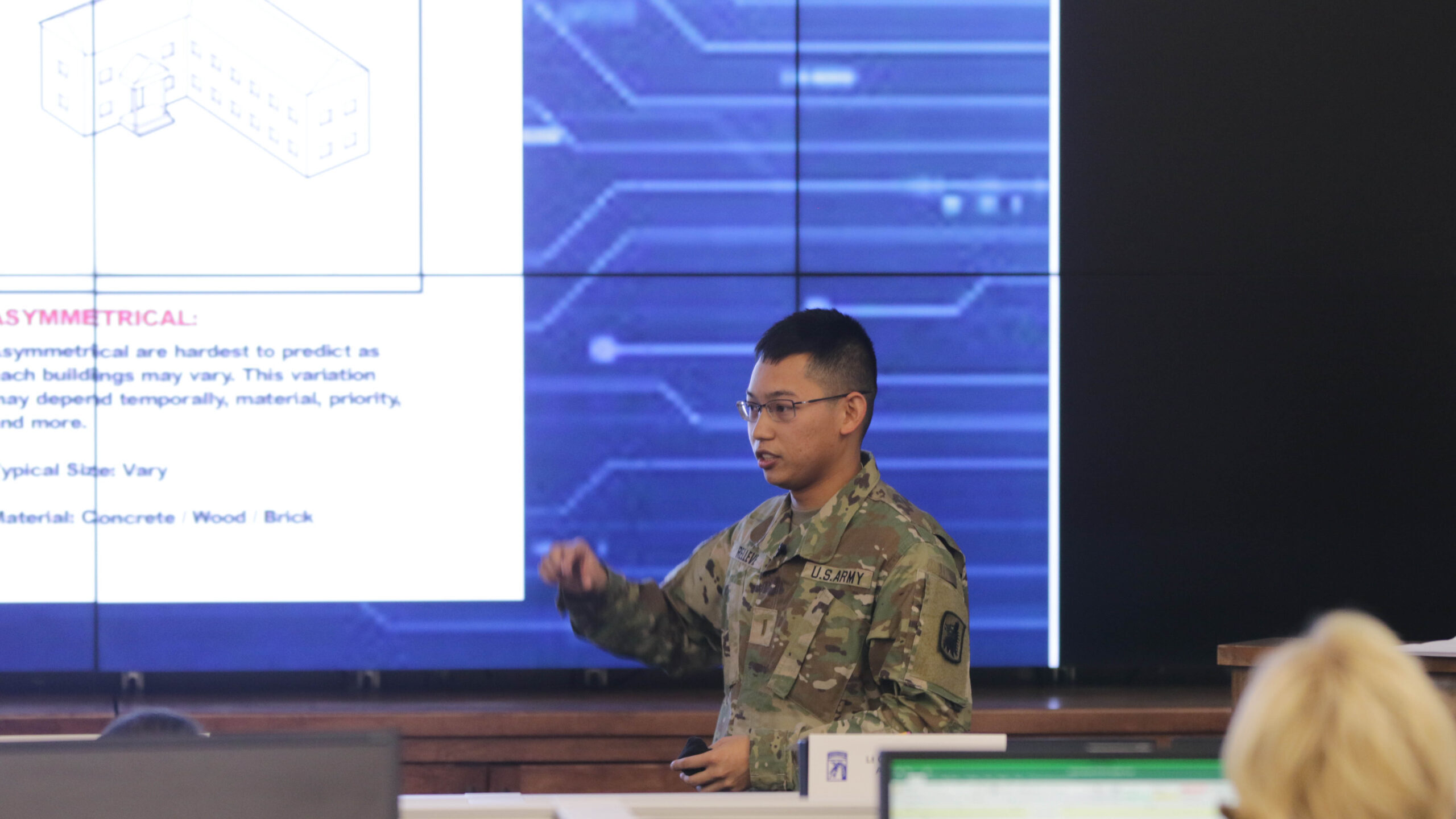 His presentation listed numerous benefits of the technology, including improving urban warfare planning, rehearsals and reducing civilian deaths. Additionally, the software could assist commanders in developing courses of action and improve soldier situational awareness ahead of the mission.

“Readiness will be a lot better in terms of what to expect once they’re about to do a mission that involves going inside the building,” said Relleve, an architect for the Navy in his civilian life. “And I think if soldiers are extremely familiar with what they’re going to be expecting, they’ll be more ready.”

In practical use, the AI/ML solution would be paired with an architecture subject matter expert, such as Relleve, to help analyze more difficult structures that don’t have a pattern. The algorithm would be able to largely identify the interior structure of symmetrical buildings and buildings in clusters that are likely to have similar interiors. Asymmetrical buildings would require help from another SME. In his presentation, Relleve estimated that with proper resources his project could be completed in one year.

Judges encouraged Relleve to expand beyond his current idea for mission planning and think about how it could potentially integrate live video feeds onto soldier augmented reality glasses in the future. Relleve said that’s “definitely” a future possibility as the capability matures.

“Now that I know that I have the support from the Army, I’m more motivated to continue this,” Relleve said. “I’ll take all the opportunities that they’ll provide me to make sure this becomes a reality within the next one or two years.”

Relleve said his idea could also be relevant to other three-letter agencies such as the National Reconnaissance Office. Buccino told Breaking Defense that the service is working to find an external agency to partner with Relleve.

Moving forward, Buccino said they would like to see participation in Dragon’s Lair continue to grow, potentially incorporating industry and academia.

“Ideas are out there,” Buccino said. “It’s just a matter of finding them.”