The Iranian pavilion at DIMDEX 2022, with the US flag hovering nearby. (Agnes Helou/Staff)

DIMDEX 2022: The seventh Doha International Maritime Defense Exhibition and Conference (DIMDEX) was lightly attended compared to previous years, but industry still made its presence known, with a full complement of large armored vehicles appearing alongside manned and unmanned aircraft on the show floor.

There was no Russian presence at the show, and unlike other regional conferences, no major deals with Chinese firms were announced. Also absent from the show were major players from the Gulf region, such as Saudi Arabian Military Industries and Emirati conglomerate Edge.

In a rarity, US firms shared floor space with representatives from the Iranian Ministry of Defense, which was showcasing Iranian-made weapons. Intriguingly, Iran was totally absent on day one, but appeared with a full-fledged stand on day two. A Iranian representative said that they built it overnight in 12 hours; the reason behind this is still unknown.

One theme that was seen clearly throughout the event was the surprising amount of investment Qatar is having on western defense companies. The star of the show was Qatari government-owned Barzan Holdings, which has previously kept a low profile. In some ways, this felt like a coming out for Barzan, with many aircraft and systems branded with its logo at various stands across the show.

“When we started there was virtually no military industry in the state of Qatar, so we started in terms of investment and acquisition of certain companies and transferring certain technologies to the country,” he said.

Reflecting that strategy, Barzan’s branding appeared primarily in two ways, either as Joint Ventures or as investments within small companies. The joint ventures include Rheinmetall Barzan Advanced Technologies, a tie-up with one of Germany’s major players which had a large presence on the show floor, and Bindig, a JV with gun-maker Beretta.

The subsidiaries that are fully owned by Barzan Holdings and through which the company is working on technology transfer to Qatar include Barzan Industrial Group, which produces rifles and related material; Barood Ammunition Factory that produces small caliber ammunition and supplies it to the Qatar Armed Forces; Barzan Aeronautcial, focused on aerial ISR options; and Barzan Maintenance Shield, focused on MRO services. 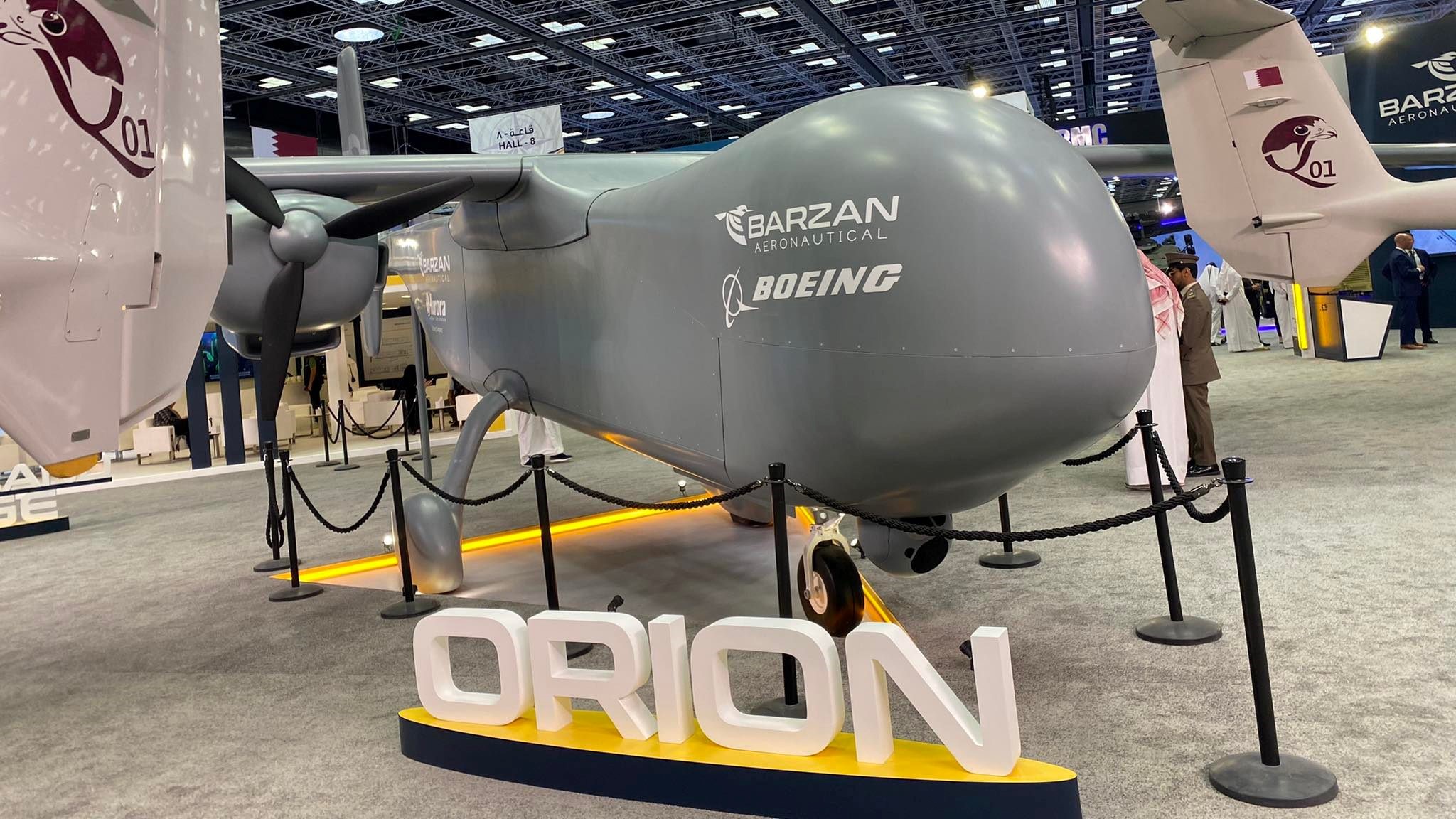 “Technology transfer has already started with our subsidiaries, for instance Barzan Industrial Group, is an example where we localized the manufacturing of certain weapons that we supply to the Ministry of Defense,” Al- Khater commented.

For instance, the Q01 MALE (Medium Altitude Long Endurance) aircraft originally produced by Germany’s RS UAS was exhibited at the stand of Barzan Aeronautical. A second design, known as Q02 was on display at the show; company representatives told Breaking Defense that the Q01 was just a prototype while the Q02 is the actual aircraft undergoing testing.

Breaking Defense noticed that KMA 556 rifle originally produced by US- based Wilcox industries was presented at Barzan Industrial Group. According to the company representatives it is 90% produced in the company facilities in Qatar.

Another MALE system on display was Boeing’s Orion drone, which surprisingly had a Barzan Aeronautical tag on it. Barzan Holdings vice president Abdullah Hassan Al- Khater didn’t respond to Breaking Defense question during the show about the link between the Qatari firm and America’s largest aerospace firm.

Barzan Holdings VP highlighted that the firms primary target is the Qatari Armed Forces and secondarily the export market whenever that is possible, “which is the main drive for us.”

Al-Khater did announce that Barzan has invested in a US facility in South Carolina, with plans to open during 2022. “Once we have it up and running it will develop UAVs that will be utilized for ISR activities in the future. We have partnership with Textron, and Electra.aero which is a legacy investment in South Carolina,” he told Breaking Defense.

For its part, US firm General Atomics had its SeaGuardian UAV, which had also been exhibited at a recent show in the UAE. Given the visible success of unmanned systems during Ukraine’s efforts against Russia, expect much interest in unmanned systems in the region to come.

Why Almost Everyone Is Wrong About Cooking With Lard –

Why Almost Everyone Is Wrong About Cooking With Lard -