The Army considers its Future Vertical Lift (FVL) program as a “family” of aircraft. So far, this family has only two members: the Future Long Range Assault Aircraft (FLRAA) to replace Black Hawk transports and the Future Attack Reconnaissance Aircraft (FARA) to fill the role left by the retirement of the Kiowa Warrior and since filled by AH-64 Apaches.

When the Army first began to plan for its FVL family, it had aspirations for additional siblings — specifically a heavy lift cargo version to replace the CH-47 Chinook. While the Army continues to upgrade CH-47D helicopters to the CH-47F standard, which is primarily an avionics and digital systems upgrade not necessarily related to performance, the best-case scenario for a potential heavy lift FVL platform is kickoff in the 2030-2035 timeframe. In the meantime, the Army will be tasked with lifting heavier hardware such as full-armored Joint Light Tactical Vehicles. 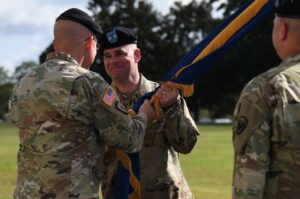 Francis: Future Vertical Lift is the Army’s number-three modernization priority and part of the 31+4 (priority programs). FARA and FLRAA are the aviation branch’s number one and two modernization priorities and critical to the Army’s ability to fight and win in multi-domain operations. Army aviation is focused on fielding those capabilities to our soldiers beginning in fiscal year 2030.

Breaking Defense: What’s the present-day thinking about how to keep heavy lift relevant in the coming years until the time FVL addresses it with a new program, which could be 20+ years in the future? Army Chief of Staff Gen. James McConville has testified about needing the CH-47 Block II capability, but there’s not been any funding for heavy lift of any kind.

Francis: Present-day thinking about keeping heavy lift relevant in the coming years is focused around incorporating targeted modernization of the enduring fleet and incorporating Modular Open System Architecture into AH-64, UH-60, and CH-47. We have also executed other changes across the DOTMLPF-P (Doctrine, Organization, Training, Materiel, Leadership, Personnel, Facilities-Policy) to ensure our enduring fleet remains relevant for multi-domain operations.

Breaking Defense: Boeing is obviously pushing for CH-47 Block II, and I understand that the Army is conducting systems testing at the flight test facility in Huntsville, Ala. What are your thoughts on upgrading existing platforms to carry more cargo?

Francis: The Army has three Engineering, Manufacturing, and Development (EMD) prototype aircraft for developmental testing of the Block II program. Two of those aircraft are located at the Boeing Test facility in Mesa, AZ. One aircraft is located in Redstone Arsenal, AL at the Redstone Test Center. The Block II program is designed to upgrade existing MH-47 and CH-47 aircraft to increase payload capacity and integrate other product improvements. The Army is currently executing the ITEP program that will restore performance on the AH-64 and UH-60 aircraft. The Army will continue to experiment and analyze capability gaps to ensure the enduring fleet remains viable in MDO (multi-domain operations).

Breaking Defense: What role will Army heavy lift play in the Great Power competition against near-peer/peer threats like China and Russia?

Army aviation must continue to improve its reach, survivability, lethality, and sustainment in order to continue to provide these fundamental capabilities to the Army in the future operational environment. Heavy lift plays a critical role in the Army’s ability to “Move” or maneuver, providing an asymmetric advantage to our ground commanders now and in the future.

By executing our current modernization strategy that includes FARA, FLRAA, and targeted modernization of the enduring fleet, Army aviation continues to be dominant in the lower tier of the air domain and provide the best capabilities to commanders and soldiers on the ground.