Photo by PLA of amphibious landings.

WASHINGTON: China is in the midst of “a large-scale exercise, a theater level exercise of huge scope and scale. It’s something that really US forces haven’t done, you know, since Reforger — and you’re in the ’80s — of that scale. And they’re pulling it off.”

It wasn’t immediately clear what exercise Furness was referring to. Breaking Defense reached out to both the Marine Corps and Pentagon public affairs, and got this from Lt. Col. Martin Meiners, who said that “specific answers to these questions veer into intelligence matters, which we typically don’t discuss,” before referring further questions to the Defense Intelligence Agency.

After publication of this story, a DIA spokesperson said in a statement “DIA doesn’t have anything to add. Please contact the PRC for information about their exercise.”

Intriguingly, it appears there are at least two major exercises underway with PRC forces — including one in conjunction with America’s other great power rival, Russia.

The day before Furness spoke, the Chinese and Russian Defense Ministries issued a joint statement saying that 10,000 troops from both countries would take part in a major exercise, West-Interaction 2021, the first half of this month.

“The two sides’ participating troops will be mixed into teams to make plans jointly and conduct training together in a bid to verify and improve both troops’ capabilities of joint reconnaissance, search and early warning, electronic information attack, and joint attack and elimination,” a joint statement said. 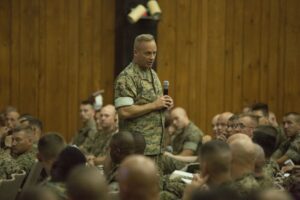 According to the statement released on the Chinese Ministry of Defense’s website, “The exercise is aimed to consolidate and develop the China-Russia comprehensive strategic partnership of coordination in the new era, deepen the practical cooperation and traditional friendship between the two militaries, and further demonstrate the two sides’ resolve and capability to fight against terrorist forces and jointly safeguard regional peace and security.”

(Of course, anyone who remembers the 1969 fighting between Russian and Chinese Communist forces knows just how flexible that “traditional friendship” has been.)

Notably, Dean Cheng, Chinese military expert at the Heritage Foundation and a member of the Breaking Defense Board of Contributors, found references to a current large exercise in southeast China, though he didn’t find anything specifically referred to as a theater-level exercise, which he said was not surprising.

This second large exercise, Cheng said, involves thousands of troops, including special operations forces, the Chinese equivalent of Marines and ground troops. They are practicing amphibious landings and the exercise is described as a joint exercise. However, he couldn’t find any reference to fixed wing aircraft, which would normally be required to consider an exercise as truly joint.

The Chinese identify these as separate exercises, Cheng told said. He added that the PRC often tries to muddy the waters on the scope and scale of exercises to make it more difficult for observers — which fits in with the comment about “intel” issues from Pentagon public affairs.

So, it appears the Chinese are engaged in at least two major exercises across a vast geographic area, including the command that would lead any strike against Taiwan, Cheng said.

This is all part of the seemingly constant press of the Peoples Republic of China to build a vast, capable and advanced military to spearhead its efforts to overturn the liberal international world order — created largely, but not exclusively, by Western Powers since the 1648 Treaty of Westphalia.

In what could serve as a metaphor for the persistent and growing contest between the United States and China, Furness spoke of how, when he was stationed in East Africa, Chinese troops would, on spotting his uniform, come right up and challenge him and those with him:

“Everywhere we went, we were confronted with Chinese,” he said. “They would come up to us in the hotels, out in the streets and just kind of get really in our face. And they’d basically tell us, we’re coming after you. They weren’t shy about it at all.”

While the military exercises are a flex of hard power, China is no stranger to the use of soft power as well.

Over the last 15 years as it has attempted to spread its territorial claims, Beijing has built fake islands and turned them into de facto military bases, repeatedly flying and sailing close to territories and reefs to which they have no international legal claim, moving military forces close to Taiwan and other US allies and partners, and pressing economic and other arguments that they are the nation on the rise.

Now Beijing has a new trick it’s trying out, according to the head of Indo-Pacific Command: renaming geographic locations with Chinese names. 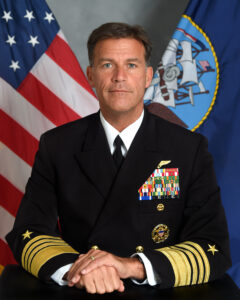 “Now to reduce those tensions we spend a lot of time with our allies and partners to ensure that the international rules-based order is maintained and unlawful claims don’t go without challenge. But,” Adm. John Aquilino said at the Aspen Security Conference on Wednesday, two days after Furness spoke, “the Chinese recently, just recently, unilaterally renamed 80 geographic features in the area with an inherent claim that goes with it.”

Continued Acquilino, “This attempt to restate a revisionist history view of claims is just counter to everything that those nations with common values believe. And we will operate here, to ensure that that freedom of navigation for all is maintained, and that we will preserve the stability and peace.”

To those who argue America is in decline or that China will simply outgrow and outpace the United States, Aquilino noted this: “But I want to be very clear. We have the world’s greatest military on the planet. That military will operate anywhere in accordance with international rules and laws. We will fly, steam and sail anywhere international law allows. The US Pacific Fleet, just recently, sailed through the Taiwan Straits.”

But more broadly than refusing to accept China’s spurious claims to waters and territories to which it has no recognized legal claim and demonstrating that refusal throughout the Pacific, there are other factors to bear in mind when discussing the relative power of the two countries. “So, the narrative is not based in fact,” Aquilino said. “The US has the world’s largest economy. I don’t think that I would categorize the US in decline; I do believe it is a narrative that other nations would like to continue to send. But I do believe it’s not based in fact.”