There’s been a great deal of chatter lately about the form, function and size of China’s third aircraft carrier, which looks to become the world’s second largest economy’s first “catapult assisted takeoff but arrested recovery” carrier. This op-ed by three experts at the Center for Strategic and International Studies seemed to offer the best combination of visual data and technical explanation. Thank you to CSIS for permission to run it. Read on! The Editor.

Recent commercial satellite imagery reveals that China has made substantial progress in the construction of its third aircraft carrier, commonly known as the Type 003. The vessel is slated to become the largest surface combatant in the Chinese People’s Liberation Army Navy (PLAN) and significantly upgrade China’s naval capabilities.

Work on the Type 003 has been underway at Jiangnan Shipyard in Shanghai since at least late 2018. Over the last several months, prefabricated components of the vessel’s hull have been assembled. Satellite imagery from May 30, 2021, shows that the flight deck is now partially complete. While much remains to be done, close analysis of the Type 003’s status offers key insights about its configuration.

China’s third aircraft carrier will be considerably larger than its predecessors, the Liaoning and Shandong, which each measure 304.5 meters in length. Earlier assessments of the Type 003 by CSIS estimated its waterline dimensions at roughly 300 meters in length and 40 meters in width. As the flight deck has taken shape, the vessel’s overall length has increased to approximately 315 meters, and its width at the widest point has expanded to 74 meters.

The Type 003 will continue to grow as work progresses. Perhaps the best size comparison is the Kitty Hawk-class of carriers, which the U.S. Navy operated from the 1960s through the 2000s, and which had a waterline length of about 300 meters and overall length of nearly 324 meters.

In addition to being larger than its predecessors, the Type 003 is widely expected to feature a flat-top flight deck with a “catapult assisted takeoff but arrested recovery” (CATOBAR) system. This would mark a major upgrade from the less advanced ski jump-style system used on the Liaoning and Shandong. The use of catapults will enable the Type 003 to launch fixed-wing aircraft with heavier payloads and more fuel, as well as larger aircraft that have a lower thrust-to-weight ratio.

Most CATOBAR systems are steam-driven, but this is starting to change. The U.S. Navy’s new Gerald R. Ford-class of carriers employs an electromagnetic aircraft launch system (EMALS) that enables faster takeoffs, reduced maintenance, and increased energy efficiency. Rumors suggest that China intends to leapfrog past steam catapults by outfitting the Type 003 with an EMALS-style system. The decision on what type of catapult the Type 003 would employ was likely made years ago; and while the use of an EMALS-type system remains unconfirmed, altering course would bring significant challenges and delays.

The increased size of the Type 003 paired with an improved launch system opens the door to a larger and more diverse carrier airwing. While it will be a couple of years before aircraft find their home on the Type 003, the airwing may include airborne early warning and control (AEW&C) aircraft, such as the KJ-600. Should this materialize, it would significantly enhance the PLAN’s situational awareness and warfighting capabilities.

The Type 003 is also expected to benefit from an upgraded island—the tower structure housing the command center for flight deck operations, along with radar and communication equipment. Compared to the Shandong, the Type 003 will likely have a smaller island, which would free up crucial real estate on the flight deck. In the satellite imagery from May 30, 2021, a portion of the island can be seen located near the vessel, tucked between two movable environmental shelters. Low-altitude aerial imagery of Jiangnan Shipyard from June confirms the presence of the island at Jiangnan. 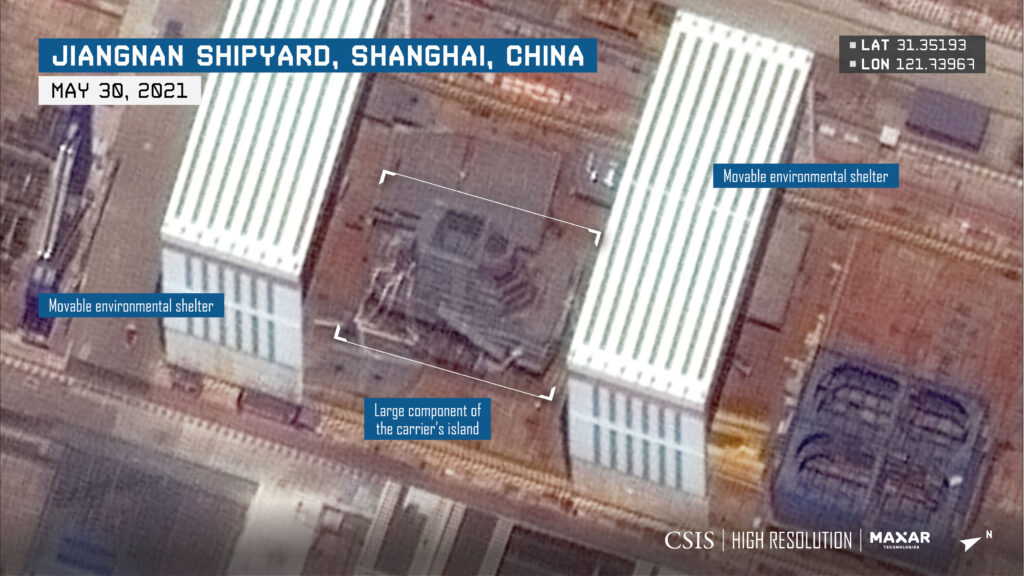 Questions remain about the number and size of aircraft elevators on the Type 003. These elevators, which move aircraft between the internal hangar bay and flight deck, are crucial to flight operations. Satellite imagery assessed by CSIS and low-altitude imagery circulating on social media suggest that the Type 003 will be configured with two starboard-side aircraft elevators, similar to the Shandong. However, the elevators on the Type 003 are estimated to be larger, which could allow them to lift two aircraft simultaneously. France’s Charles de Gaulle has two elevators and U.S. Gerald R. Ford-class carriers have three elevators, all of which are capable of lifting two aircraft at the same time.

Many details of the Type 003 cannot be confirmed until additional progress is made. Large openings remain in the center of the vessel, allowing workers to move components inside the vessel’s hull and into the forward and aft engine rooms. Several elements of the deck’s sponsons, which project outward over the ship’s sides, are also not yet finished. Toward the bow, the top layer of the flight deck has yet to be laid down. Satellite imagery shows numerous components of the flight deck and support structure for the island have been positioned near the vessel and will soon be put into place.

Once the deck is further assembled, the dry dock’s two large gantry cranes will likely be used to hoist components of the island onto the deck. Work will continue for several months, and possibly longer, before the dry dock is flooded and the ship is launched. If work on the third carrier progresses at roughly the same pace as the construction of the Shandong, the Type 003 may not be launched until 2022. After launching, it will be several years before the vessel is fully fitted out, completes sea trials, and is then commissioned into the PLAN.

When the Type 003 eventually enters service, it will be a formidable addition to China’s navy and allow it to more effectively project power into the Indian and Pacific Oceans.

© 2021 by the Center for Strategic and International Studies. All rights reserved.