KYIV: China’s Navy has taken another step toward eliminating the last advantages that the US Navy enjoys, in the form of the new, stealthy carrier fighter aircraft known as the J-35.

What has caught the attention of US defense policy makers is the J-35’s appearance at the aircraft carrier building in Wuhan, Hubei Province that performs research for PLAN naval aviation operations. The photo is the latest of images taken of the Wuhan facility over the years by Chinese aviation enthusiasts and then posted anonymously on various PRC-based websites. Many times these photos are deleted as they constitute violations of Beijing’s pathologically secretive and pervasive military security guidelines.

“The J-35 may well represent another significant milestone in the Chinese long-term pursuit of a blue-water carrier based naval aviation capability”, said retired US naval intelligence officer, Capt. James Fanell. Looking back over a long career as the most-senior retired analyst in charge of PLAN assessments, he says “we are seeing the goals of [now retired] Admiral Wu Shengli coming to fruition as the PLAN continues its transformation into the most powerful navy on the planet.” 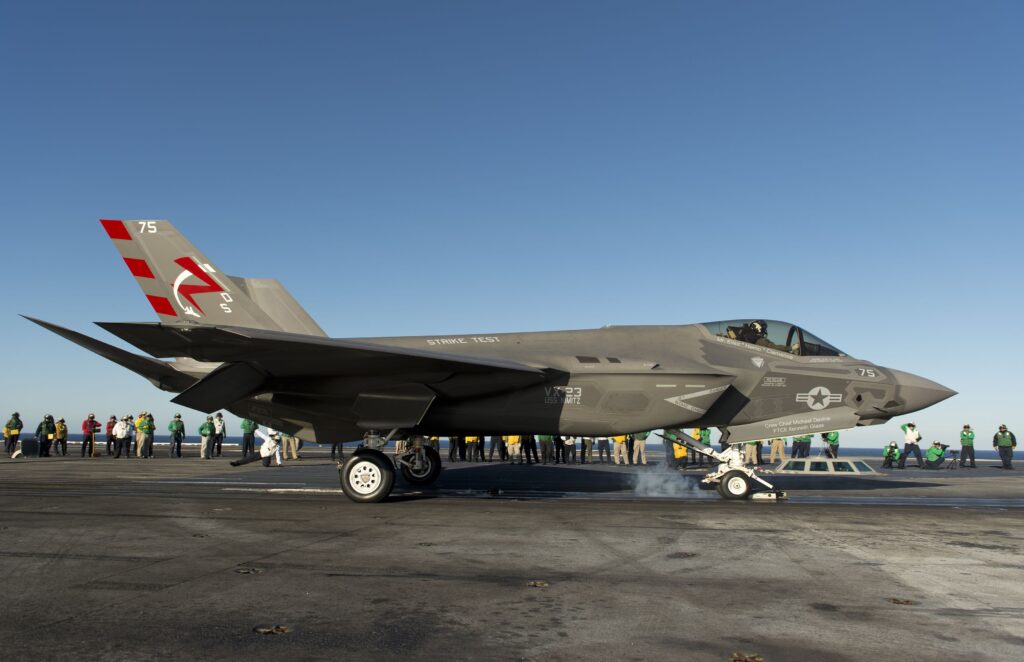 The Shenyang Aircraft Corporation aircraft has existed as an actual flying platform since 2011, after which it progressed through three major design iterations and several designators (F-60/J-31/FC-31), until appearing as the J-35 aircraft with a re-configured wing and an elongated fuselage optimised for a lower radar cross section (RCS).

The J-35’s first public appearance was as the J-31 at the 2014 Air Show China expo.  This model was fitted with two underpowered Russian-made engines originally developed for the Mikoyan MiG-29.  But even this earlier configuration already appeared to be a twin-engine adaptation of the US Lockheed Martin F-35’s design.

Another Step On the Long March

The J-35’s emergence is not just a major step in the Chinese industry’s march to create a modern carrier force, but is a two-generation leap beyond the PLAN’s initial choice for a carrier-capable fighter aircraft, another SAC-built aircraft, the J-15.

The J-15 was not an indigenous Chinese development but a reverse-engineered copy of the Russian Sukhoi Su-33 carrier fighter. It also draws on an early pre-production Su-27K prototype that SAC acquired from a naval aviation research centre in then-Ukraine controlled Crimea, which was used to develop many detailed aspects of the Chinese variant.

As a 1980s design made almost entirely of conventional metal alloys, the J-15 also suffers from being the heaviest carrier-based fighter in the world.  (The weight factor was one reason the Russians declared their Su-33 design obsolete in 2015.)  With an unassisted, non-catapult take-off, with a full fuel load, it is limited to only two tonnes of its 12-tonnes weapon capacity — two CASIC YJ-83K ASMs and two older-generation PL-8 infrared-guided AAMs.

A PLA military source who spoke on condition of anonymity said the J-15 is so overweight that, “even the US Navy’s new generation C13-2 steam catapult launch engines that are installed on Nimitz-class aircraft carriers, would struggle to launch the aircraft efficiently.”

This has prompted SAC to pour significant resources into the J-35, which is 22,000 lbs. lighter and carries its missiles in an internal weapons bay to maintain the aircraft’s stealth signature.

The other half of the equation is the general trend that the PLAN is becoming a progressively larger force than the US Navy. The increasing gap in numbers has been tempered by the reality that US naval aviation is still “the great equalizer,” as one NATO-nation intelligence officer and PLA specialist explained. (The greater tonnage and lethality of the US fleet is also an important factor.)

“The US nuclear-powered carriers — and the nuclear submarines as well — are what gives the US Navy this technological edge and long-range strike capability. For years now, that has compensated for the increasing numerical mismatch between the two navies,” he continued.

Numbers-wise the PLAN currently constitutes 400 warships and submarines. According to a recent US Naval War College assessment the PLAN – will increase to a combined force of more than 530. The pace of the PRC’s shipbuilding industry is nothing short of relentless. Between 2015 and 2017 alone, China produced nearly 400,000 tonnes of naval vessels, roughly double the output of US shipyards within the same period.

In comparison to the rapidly modernising PLAN, today’s US Navy is sometimes described as shrinking and over-extended; as of March it operated 296 warships and submarines.

But US defence policymakers’ anxiety moved up several notches when the PLAN’s first aircraft carrier, the CV-16 Liaoning, was commissioned in 2012 and declared combat-ready four years later.

The Liaoning Type 001A, sister ship to the Russian Navy’s (VMF) Admiral Kuznetsov, is more than a generation behind any US carrier. It relies on a ski-ramp flight deck, instead of the catapults installed on all US-design carriers.

A second, Type 002 carrier, the CV-17 Shandong is a near-clone of the Liaoning. Commissioned in late 2019, it is undergoing its last set of sea trials. Western analysts say both these two carriers are really meant to be training platforms and will be replaced by a next generation of carriers that use catapults, designated the Type 003. 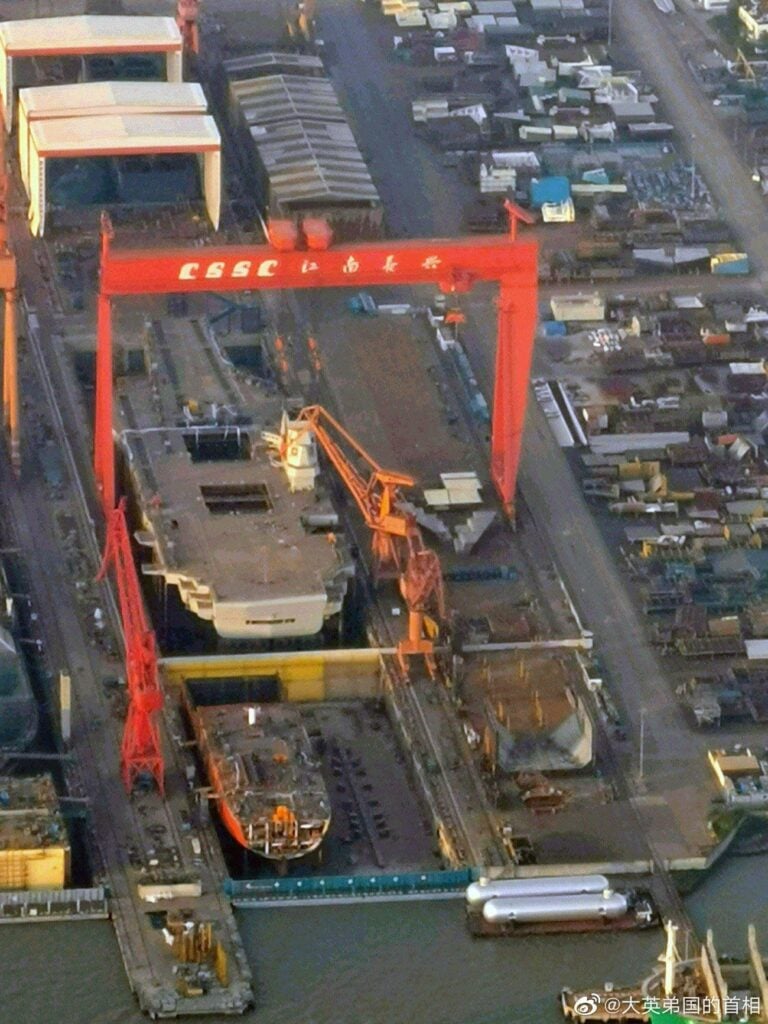 The Type 003 will be a traditional “flattop” design. With a displacement of 80,000 tonnes, it is 15,000 tonnes heavier than the CV-16 and CV-17 models It is designed to be fitted with an Electromagnetic Aircraft Launch System (EMALS) – a next-generation catapult that the US Navy is only now just fielding.

The Chinese catapults, which will not have a nuclear reactor to power them, is reportedly backed up by integrated propulsion system (IPS) technology. This is designed to create significant increases in fuel efficiency for the ship’s conventional power plant.

The question mark is just how proficient Chinese designers are with EMALS technology.  It is an innovation that the US Navy has sunk billions into and is based on decades of experience with launching and retrieving aircraft back aboard deck. In late 2017 in an interview with China Central Television, Rear Adm. Yin Zhuo, a senior researcher at the PLA Naval Equipment Research Centre, said China had done “hundreds of [land-based] tests” using EMALS with J-15 fighters in the past few years.

A US naval air systems contractor who spoke to Breaking Defense said tests on land and actual use at sea are still “two different realities. The US Navy’s large body of [naval aviation] know-how has greatly informed the design parametres and operational concepts for an EMALS catapult. The Chinese are now attempting to jump feet first into the EMALS-generation without any operational experience, without having passed through the generation of steam-powered catapults. which may prove to be a major technical challenge.”

Given these two Chinese military innovations seemingly just over the horizon, there are those calling for a re-assessment of the relations between the US military and its Chinese counterpart.

“The reason we keep being ‘surprised’ by developments such as J-35 and these new carriers is the complete lack of transparency from the Chinese side – despite the long-running emphasis by the US on military-to-military engagements with Beijing that is supposed to create just that,” said Fanell. “It is a near one-way street, as we receive almost no openness in return for the insight we are providing the PLAN. It’s well past time to re-evaluate this practice of unaccountable arrangement.”