WASHINGTON: The Navy next week plans to challenge hundreds of outsiders to a series of tests to see if, and how, they can evade, break, or even take over the service’s unmanned systems. If it goes well, the service will walk away with its methods ransacked and a whole lot of homework for the admirals to do about shoring up its unmanned strategy before it’s called on to face a real adversary.

“There is no admiral in the fleet today who’s going to go fight with unmanned systems, even in concert with manned platforms, until it is proven to them that they can be effective,” Rear Adm. Lorin Selby, chief of naval research and head of the Office of Naval Research, told Breaking Defense in an exclusive Nov. 9 interview.  “One of the things ONR has done throughout its history is proven to senior leadership that new technologies can be used in militarily relevant ways to create effects and that is part of what we’re doing.”

That’s where next week’s competition comes in. Branded as “HACKtheMACHINE: Unmanned,” the Nov. 16 event will bring in a variety of groups not usually found in Pentagon Rolodexes to troubleshoot military problems — from vulnerabilities in autonomous navigation software to methods for accelerating acquisition — with cash rewards for the top competitors.

It’s not just senior leadership and fleet commanders who need to see the validation for which Selby’s hoping. For the past several years, the Navy in both public and private has argued the value of unmanned systems to lawmakers who are skeptical of the rapid pace the Pentagon is proposing and are fiercely protective of the funding — and by extension constituent jobs — that labor from building traditional warships bring.

The Defense Department has hosted these competitions before, but Selby and Fathom5, the company helping ONR produce the event, said every challenge this year is directly linked to a program executive officer behind it who is ready to put the best solutions to use as quickly as possible.

That’s in part to guard against what Fathom5 chief executive Zachary Staples called the kind of “innovation theater” that’s plagued past Pentagon attempts to bring in outsiders.

“You get people to come out for their first engagement with DOD and then nothing happens with it… That person probably isn’t going to collaborate with the Navy or the Marine Corps again,” said Staples, a 20-year Navy veteran who started organizing Hack the Machine events while still in uniform.

Although the event’s name may imply a focus on cybersecurity, Selby said that is a misconception. Rather, the challenges are about presenting militarily interesting problems in a way the public can understand and troubleshoot.

One track was inspired by Unmanned Integrated Battle Problem 21, an exercise held earlier this year focused on bringing different kinds of unmanned systems together in the same battlespace. That exercise demonstrated that a variety of problems arise when different types of unmanned vehicles attempt to communicate with one another, Staples said.

This track “is going to go after a couple of problems in this space,” he said. “It’s a bug bounty program on autopilot. Every unmanned system has an autopilot [software] and the Navy needs to understand the classes of vulnerabilities in autopilots in general.” 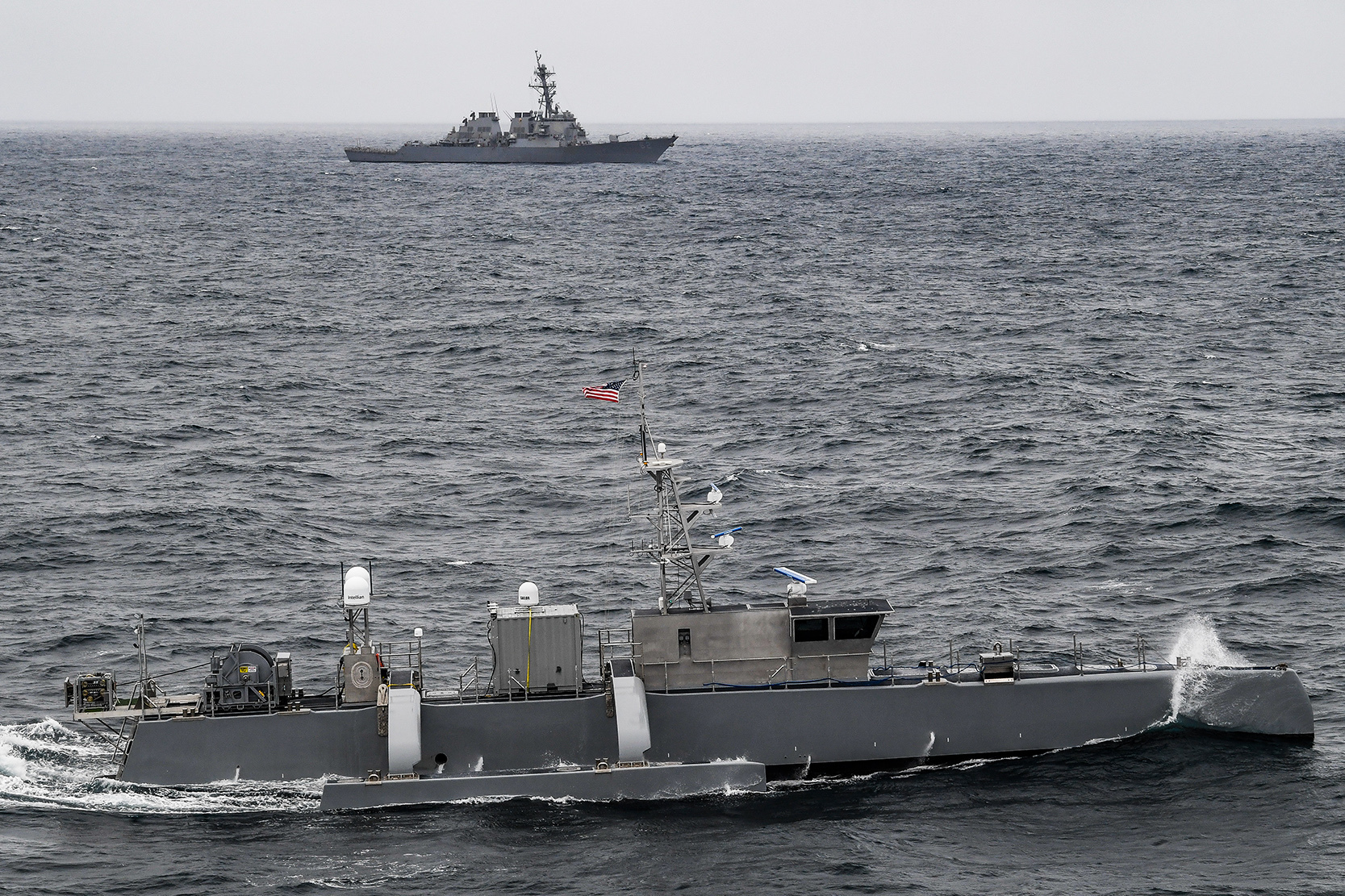 Commonly used by technology companies, “bug bounty” programs involve organizations offering cash rewards to anyone who can identify potentially problematic code in their software. For the Navy’s purposes, this could mean a backdoor vulnerability that a hostile actor would use to send new commands to a drone executing a mission or issues in autonomous navigation software that may cause vessels to collide.

Another track centers on modeling and simulation to accelerate the acquisition process. Contestants will be given a set of mission goals and then build a simulation of a wide-area search scenario, acting as both a rogue actor seeking to avoid detection and as the Navy trying to find them. The end goal is to use modeling and simulation to help the Navy determine what capabilities it needs to pursue for a given scenario.

Staples and Selby said this track may have direct implications for US Southern Command which is routinely tasked with interdicting illegal narcotic smugglers. ONR is planning an event next summer focused on how unmanned systems may be able to help SOUTHCOM with its interdiction mission. The groups and solutions that perform the best in this track could be used in ONR’s upcoming exercise.

“The modeling and simulation practices for defining the operational requirements in [this track] are going to directly impact how PEO IWS works,” Staples said. “There’s direct linkages out of every track to take innovation into action, and that’s really what matters.”

The last track deals with the infrastructure for artificial intelligence and machine learning. Staples said that if the Navy is going to use those two technologies effectively in its unmanned systems, then the service will need to be able to work with and share large datasets with researchers at scale to better refine its capabilities.

Happening in the background of all the Navy’s unmanned initiatives is the Chief of Naval Operations Adm. Michael Gilday’s service-wide unmanned task force, an overarching effort to ensure the service’s actions and goals for unmanned systems are in sync.

Asked about how next week’s event will feed into Gilday’s panel, Selby related a short anecdote about the task force’s creation. The rear admiral said in April, his office at ONR sponsored a meeting with “a number of innovative folks” in Silicon Valley as well as Navy personnel from the requirements offices, including Michael Stewart, now one of the unmanned panel’s leaders.

Following that meeting, Selby’s team worked with Stewart’s office as well as the Navy acquisition executive to begin developing what is now the Unmanned Task Force. Selby’s team was also heavily involved in developing the unmanned campaign plan, the document published by Gilday last year that lays out the service’s goals for unmanned platform acquisition.

“All these things have been kind of sequenced to kind of show a natural progression between the campaign strategy, the [science and technology] plan, and then the task force stand-up, this Hack the Machine [event] and this [unmanned exercise] that we’re talking about doing early next year to show what can be done and how you can do things differently and still achieve militarily relevant effects,” Selby said.

Staples said he jokes with Selby that he views Hack the Machine as analogous to naval aviation’s famous flight demonstration team, which was created to boost recruitment.

“What does the Blue Angels for geeks look like?” he said. “What do we do to attract geeks who want to help their country, but they don’t see their path in?”

How to Build a Modern Mentorship in Cybersecurity

How to Increase Your Productivity with CBD Products? –

How to Increase Your Productivity with CBD Products? -