SYDNEY: Australia plans to welcome American and British nuclear submarines at her western coast “for extended periods of time” to “ensure that they can maintain and perform operations out of Australia,” Prime Minister Scott Morrison said in a visit to Western Australia today. 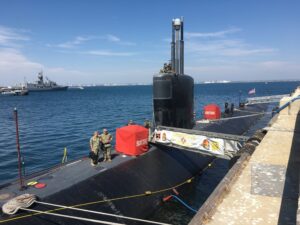 However, despite the plain language, there’s a small chance politics could interfere with the future visits. The prime minister actually only committed his Ministry of Defense “to commence their studies into what infrastructure and services are needed right here in the west, to support the more frequent presence of United States and United Kingdom nuclear powered submarines right here in Western Australia. We expect the results of that work to come back later this year.”

Since there’s a distinct possibility that Morrison’s government may not be in office by the time the study finishes, it may not seem like an important commitment. But the opposition Australian Labor Party has generally seemed quite committed to the AUKUS submarine deal and the general trend of increasing defense spending. And more nuclear sub visits, maintenance and resupply would translate into more jobs and more money for the west, always an attraction for politicians everywhere.

The idea of welcoming a wide range of allied or partner nations submarines to Australia for substantial visits isn’t entirely new.

“We’re talking not only about Australian submarines, we’re also talking about significant visits to our country from the Astute-class [submarines]. We had an Astute-class in [Western Australia] only about two months ago. We have the prospect, I think, of significant visits from the United States fleet — not just their submarines — and also the Japanese visits, the British visits of their frigates,” he said. “I think you’ll see more activity from the Indians. I just think this is the new norm, tragically, because of the uncertainty within the Indo-Pacific and we’ll see that ramp up over the next couple of years.”

On top of the strategic commitment to making Australia a center of nuclear-powered submarines, Morrison announced the allocation of $4.3 billion AUD ($3.1 billion USD) to build the first dry dock in Australia since World War II in Western Australia. Construction is slated to start next year and be finished in five years. This is part of a raft of recent big ticket announcements by the Liberal Party leader as Australia girds for a federal election, probably in late May. Polls show the Labor Party in the lead and the Labor leader, Anthony Albanese, pulling ahead of Morrison on a head-to-head basis.