A Ukrainian soldier stands guard in the city of Severodonetsk, Donbas region. Russian forces are focusing on the country’s southeast, where desperate attempts are under way to evacuate civilians. (FADEL SENNA/AFP via Getty Images)

WASHINGTON: It’s been two months since Russia began its unprovoked invasion in Ukraine, and a new phase of the war is starting as Russia turns away from its failed assault on Kyiv and begins to coalesce artillery and air support in the eastern Donbas region.

For the United States, which has provided a total of $3.4 billion security assistance to Ukraine since the invasion started on Feb. 24, a similar transformation is in progress. While the beginning stages of the conflict saw the US send basic equipment that the Ukrainian military could pick up and use without any training — things like small arms, vehicles and the shoulder mounted Javelin anti-tank missile system — that paradigm is beginning to shift.

In recent arms packages, the United States has begun providing more advanced weaponry that requires additional training, such as howitzers, Switchblade and Ghost Phoenix drones, and US-made radars that would be unfamiliar to Ukrainian operators. In the case of the Ghost Phoenix, the United States is delivering a capability that would see its first battlefield use in the hands of the Ukrainian military.

If the war stretches out, that aperture could continue to broaden, with Ukraine getting increasingly more capable weapons, Mara Karlin, the assistant secretary of defense for strategy, plans and capabilities, told Breaking Defense in an April interview.

“This has been such a plastic conflict. … I think there’s a lot of indications that the Ukrainians are doing a tremendous job,” she said. Given that, “you can plan more and more for things that would need greater training.”

As of the latest April 22 arms package, the United States has provided more than $4 billion worth of weapons and equipment to Ukraine since the Biden administration took office. That sum includes:

Already, the Biden administration is readying itself to assemble future arms packages.

On April 28, the White House announced a request for an additional $33 billion for Ukraine. The $20 billion earmarked for military and security assistance includes $6 billion for the Ukraine Security Assistance Initiative and $5 billion in additional drawdown authority, which is used when the US transits weapons from its own stockpile to the Ukrainian military.

During a speech on Thursday, President Joe Biden acknowledged that current funding authorized for Ukraine had almost been completely exhausted. The additional assistance would provide more artillery, armored vehicles, anti-armor systems and anti-air capabilities for Ukraine in the future, ensuring that its military won’t face a gap on the battlefield.

“It’s going to keep weapons and ammunition flowing without interruption to the brave Ukrainian fighters,” he said. “This so-called supplemental funding addresses the needs of the Ukrainian military during the crucial weeks and months ahead. And it begins to transition to longer-term security assistance that’s going to help Ukraine deter and continue to defend against Russian aggression.”

If approved by Congress, the Biden administration believes the $33 billion will be spent over a five-month period, Pentagon Press Secretary John Kirby said during an April 29 press briefing. That could give Ukraine’s military an enormous boost, equivalent to what countries like Italy and Australia spend on their military in a given year and about half of Russia’s 2021 defense spending, according to the Stockholm International Peace Research Institute.

The next phase of conflict

“This is one of the most impressive campaigns of security assistance in recent history, both in terms of the scale and the agility of it,” said Bradley Bowman, a former US Army officer and defense expert with the Foundation for Defense of Democracies. “When the Pentagon announces that a shipment is going to happen, it’s literally in the hands of Ukrainians a few days later.”

In the early days of the war, the weapons provided by the United States and its NATO allies helped address threats Ukrainian troops were facing on the ground, giving them a “tangible tactical advantage,” said Steven Horrell, a former Navy intelligence officer and defense expert with the Center for European Policy Analysis.

Deliveries of equipment like Javelins and Stingers — as well as European-made weapons like the Next-generation Light Anti-tank Weapon, or NLAW — were effective against tank convoys and helped thwart attempts by the Russians to gain air superiority, ultimately enabling Ukraine to turn the tide during the first phase of the war, Horrell said.

Those kind of weapons represented the first wave of military support. By the second month, the US and other NATO nations were working together to shuffle equipment around Eastern Europe so that old Soviet-era equipment — like Slovakia’s S-300 air defense system — could be donated to Ukraine, with the US moving forces to help backfill requirement gaps such as air defense in Slovakia.

But Russia’s more focused, territory-grabbing efforts in the Donbas mean there will likely be fewer long columns of tanks and other armored vehicles that made for juicy targets for anti-armor weapons, Horrell said.

“You’re kind of in a situation similar to … what we saw for seven years [in Western Ukraine] with an entrenched line and control,” and each side seeking to gain and hold territory, he said. 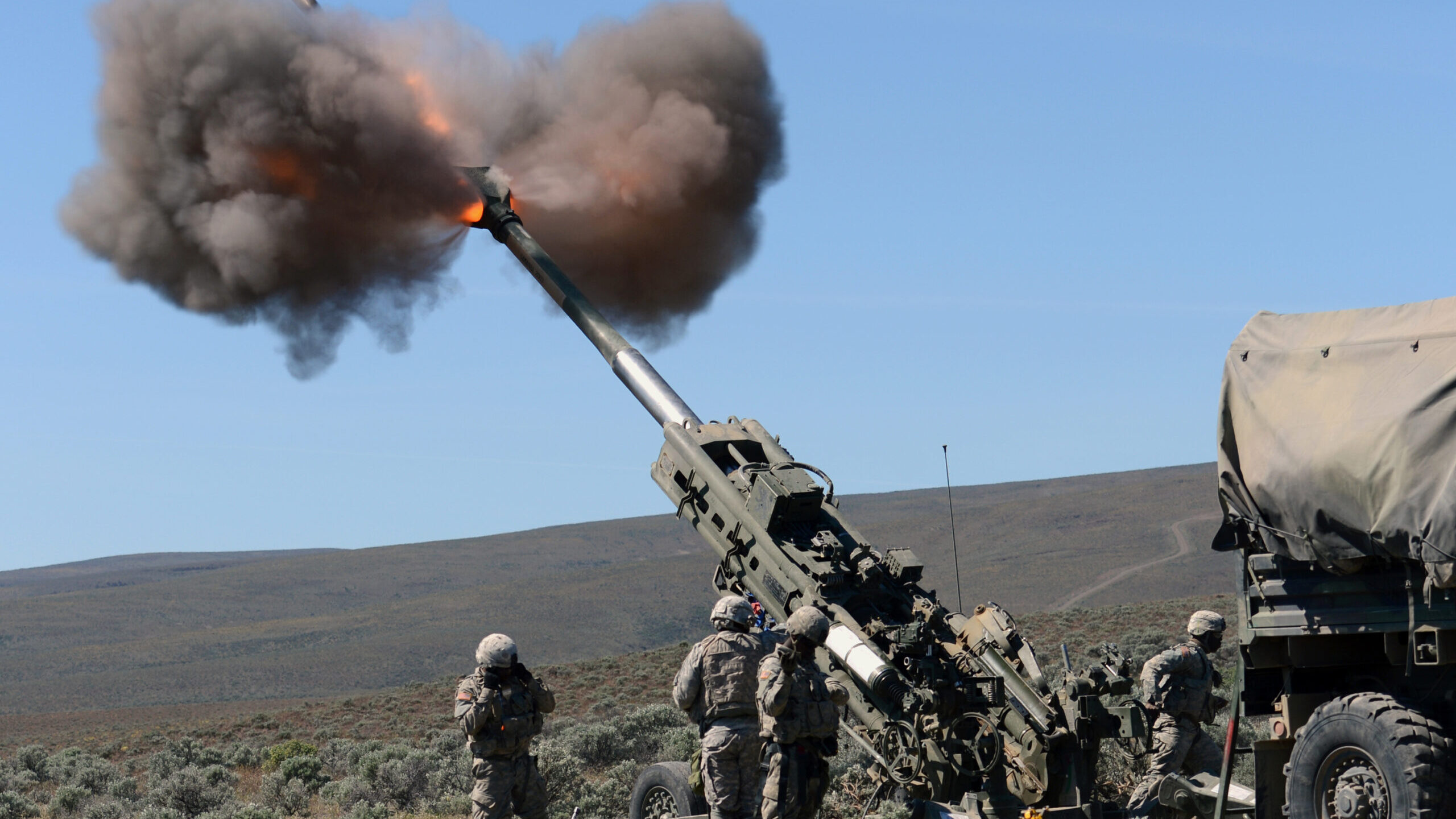 As Russia concentrates its forces and tries to encircle Ukrainian troops in the east, Bowman said the victor in the next phase of the war will likely be whoever can “close the kill chain the fastest” — identifying an enemy target, communicating a plan of attack, and then striking the adversary before they can strike back.

“I do think that we’re in potentially decisive phase here in the Donbas,” said Bowman.

Here, Russia has fewer logistical disadvantages than it had during the assault on Kyiv. “The Russians have shorter supply lines. It’s much easier to resupply Russian forces in the Donbas than it was coming via Belarus down to Kyiv,” Bowman said.

“If you’re looking at this conflict, it’s going to be about shooting and scooting. You fire and then you move before the counter fire comes back on you,” he said. “We just cannot get Ukrainians enough artillery.”

It appears the Pentagon’s top official agrees. Speaking to reporters April 28, Defense Secretary Lloyd Austin said that “what will be decisive in this next fight is long range fires. And as we interact with the [Ukrainian Chief of Defense] and the Minister of Defense on a routine basis, these are the kinds of things that they are requesting. “They believe that long range fires will be key in our efforts going forward. And so we are moving as quickly as we possibly can to provide them those capabilities.”

A day later, Kirby confirmed that US is giving a crash course of about five days to Ukrainian troops on the use of the howitzers in three locations outside of Ukraine, including Germany.  Those troops will then return home and train other members of the military.

The United States has already made moves to get Ukraine the equipment it needs for the upcoming fight. During the month of April, the administration has authorized four different security assistance packages to Ukraine, worth a total of $2 billion.

RELATED: Why hasn’t Russia used the ‘full scope’ of its electronic warfare?

These packages included surveillance drones such as the RQ-20 Puma, counter-artillery radars and counter-motor radars, and towed 155mm Howitzers with artillery — all materiel that will be pivotal in the conflict in the Donbas.

Horrell also noted the utility of loitering munitions like Switchblade and Ghost Phoenix, which can be used to get behind Russian lines to strike “soft targets” like artillery batteries and multiple launch rocket system batteries.

In terms of what Ukraine might need in future arms packages, it’s difficult to predict what new systems the US government might offer to help Ukraine counter Russian threats that will emerge in the next few weeks of combat, Horrell said.

“We haven’t yet seen the impact [of the latest aid],” he said. “I have high confidence that Ukraine’s requests will evolve as the fight evolves.”

According to Politico, Ukraine has asked the US government to consider sending MQ-9 Reapers and MQ-1C Grey Eagle drones. In deciding whether the fulfill that request, the US needs to consider the risks of technology falling into Russian hands and think about whether those platforms actually address Ukraine’s requirements, whether that’s for an unblinking surveillance drone or an unmanned strike asset. “Look at the capability” Ukraine says it wants, “not the piece of gear,” Horrell said.

Over the coming weeks, it’s likely that Ukraine will require more artillery, counter-battery radars and air defense systems, both Bowman and Horrell agreed.

Bowman pointed out that the United States has so far delivered towed howitzers. However, self-propelled howitzers would allow the Ukrainian military to be more mobile, as they wouldn’t have to be detached from a vehicle to be used and reattached to be towed elsewhere, he said. Another huge benefit would be added crew protection, as troops would be able to stay within the safe confines of the vehicle during the operation of a self-propelled howitzer.

As Russia continues to base warships in the Black Sea — posing a major threat to the cities of Odesa and Mykolaiv — the US and its allies should also consider giving Ukraine additional weaponry that would allow it to target naval vessels, Bowman and Horrell said.

“We want to be able to defend Odessa and Mykolaiv against a joint multi-access land and sea assault,” Horrell said. “In addition to expanding Russian led separatist held territories in the Donbas, [this war] was always about taking the whole Black Sea coast” which would “cripple Ukraine as a as a country economically.”

Source
As battle for Ukraine enters a new phase, so does lethal US aid is written by Valerie Insinna for breakingdefense.com