WASHINGTON: The Army, eager to build the doctrinal and conceptual basis for Multi Domain Operations, is hammering out a new version of one of its foundational documents, Field Manual 3-0, in what is being called the most significant shift in Army doctrine since the creation of AirLand Battle in the early 1980s.

For those who don’t delve deep into the Army’s soul on a regular basis, FM 3-0 is a so-called capstone document designed to provide guidance and a framework for Army operations. This week, Breaking Defense spoke with several members of Army Training and Doctrine Command who are working on Waypoint 2028, the Army’s self-described “coherent and holistic approach to fight and win within the Multi-Domain construct” — which the rewrite of FM 3-0 is part of.

One of the major changes in Army doctrine likely to be contained in FM 3-0 — and one soon likely to be reflected at the joint and other service levels — is that Phase Zero of the phases of conflict will no longer start at what is ostensibly “peace.” The new model basically recognizes what has been true for at least a decade — Russia and China regularly operate well beyond Phase Zero, often stopping just short of Phase 3, which is outright war.

The flaws of the Phase system for modern warfare aren’t news; then-Chairman of the Joint Chiefs Gen. Joe Dunford made clear his dissatisfaction with the current Phase construct back in 2016. But until now, neither senior Pentagon leaders nor the services have changed it.

So, fluidity and speed of response across those phases will be key to the Army’s functioning in Multi-Domain Operations. And that means potentially changing how divisions and corps are organized, trained and equipped. The Waypoint work has identified important changes that must be made to the division and corps, especially providing them with increased cyber and space personnel and capabilities. 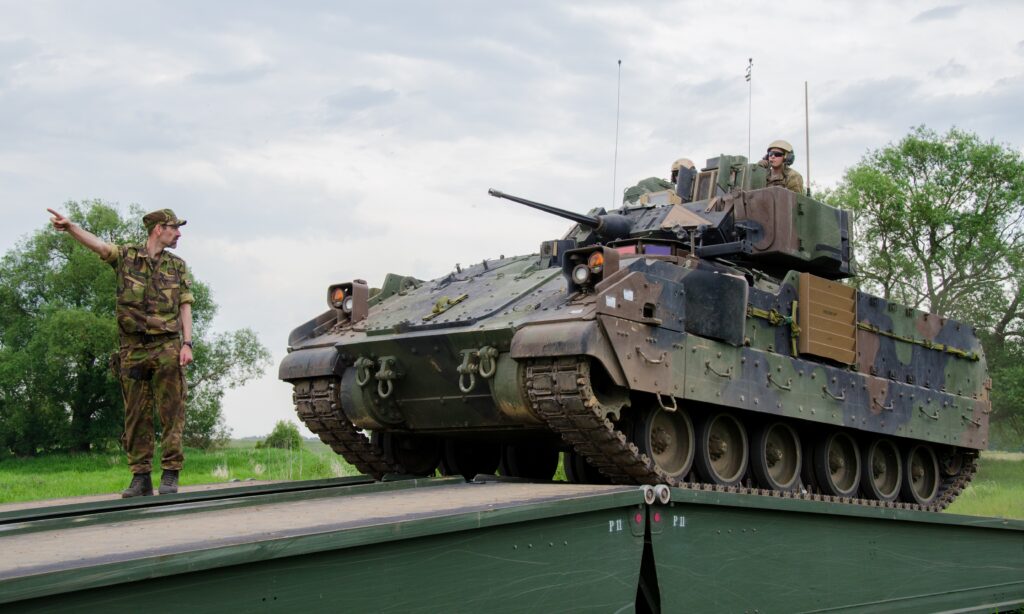 An M2 Bradley crosses a Dutch Army folding bridge. But military bridging is too short and too scarce to handle major rivers.

Perhaps the most important change Waypoint identified is to create what’s being called the “penetration division.” It will provide crucial capabilities — “tactical bridges” — allowing the Army to cross water gaps, an issue Breaking Defense has previously highlighted. While the focus of that story was how to reduce the weight of US vehicles, the problem of crossing bridges in the Pacific is just as important and challenging as crossing the many rivers of Central and Eastern Europe. The prospective new division seems to be a clear admission by the Army that it hasn’t addressed this challenge yet.

Space and cyber components and capabilities aren’t the only additions that may be made at the corps and division levels will be moved around to smaller units as needed.

“Lift and reconnaissance assets that are required for the large scale combat fight,” are likely to be added, Col. Kevin McHugh, TRADOC’s director on echelons above brigade. “A second example would be, you know, in the intelligence realm or warfighting function. An IEW (intelligence and electronic warfare) battalion is being actually proposed and it has been approved.”

Those are just some of examples the service was willing to discuss. The key, McHugh and Creed explained, is that leaders at the higher echelons have the assets to make decisions on how and where and when to deploy them.

FM 3-0 is expected to be approved by June 2022. We’ll have more coverage of this in coming days.