COLLEGE PARK, MD: Nestled inconspicuously in an office building suite near the University of Maryland’s campus, a group of Navy engineers is working to bring a concept mastered by industry to one of the fleet’s most important pieces of technology.

“We need to have the ability so that our ships can be receiving software. Whether or not you use it, just like on your phone, you get to decide [if you] take an update today or not,” said Steve Murphy, engineering manager at the facility the service has dubbed “the Forge.”

Think of it as an app store equivalent for a warship’s combat technology suite, consistently and quickly being updated with the latest versions of software.

Murphy was among several Navy officials who spoke to Breaking Defense last week as part of an exclusive, in-depth look at the Forge, a software factory established by the Program Executive Office for Integrated Warfare Systems and focused on surface combat systems, such as Aegis, the centralized command and control technology at the heart of much of the Navy’s surface fleet.

There are more than two dozen other software factories throughout the Pentagon, but the Forge’s focus on surface combat systems is unique. Over the course of a two hour briefing, a group of Navy officials — both uniformed and civilian — went deep on the project using the military’s two favorite tools: analogies and PowerPoint slides.

The Forge’s end goal is to establish the infrastructure necessary to bring software updates to the fleet’s combat systems as fast as a single day. After several years working on proofs of concept, Capt. Andrew Biehn, a uniformed officer leading the Forge, says the team’s methods have been proven viable.

Now, they are preparing to demonstrate the Forge’s capabilities during fleet exercises scheduled for this summer, an important step to convince Navy brass to keep funding them.

The Forge’s work represents the foundational first steps toward what the Navy has coined the “Integrated Combat System,” a lofty goal to create uniform fighting environments aboard every ship in the surface fleet such that a sailor could step off a cruiser and onto a destroyer with no additional training.

It’s an ambitious task. But the basic technical feasibility has already been proven by Silicon Valley tech giants, the auto industry, airline companies and other private industries. A prominent question for the Navy, is whether it can avoid tripping over its own bureaucracy along the way.

Diving Into A ‘Data Lake’ To Beat Bureaucracy

In the quest for same-day updates, the Forge team is up against an infamously slow-moving creature: military bureaucracy.

But in this case the half dozen briefers who spoke to Breaking Defense, including the one-star admiral charged with leading PEO IWS, said the core problem of the bureaucracy is not a desire to bog down progress, but a lack of real-time data available to those who need it to give the green light.

Hud Lemons, an expert from Naval Surface Warfare Center Dahlgren, pointed to the Forge’s work on the cruiser Monterey (CG-61), a veritable “microcosm of what we’re trying to do here.”

RELATED: Lockheed and Microsoft partner up on new 5G tech for military

When the ship returned to Norfolk for maintenance, the commodore explained some changes he wanted to see made to the touch screen map. Under traditional circumstances, even a simple update to a digital map could have taken years. Four weeks later, to the captain’s surprise, Lemons and team had updated the map’s software. 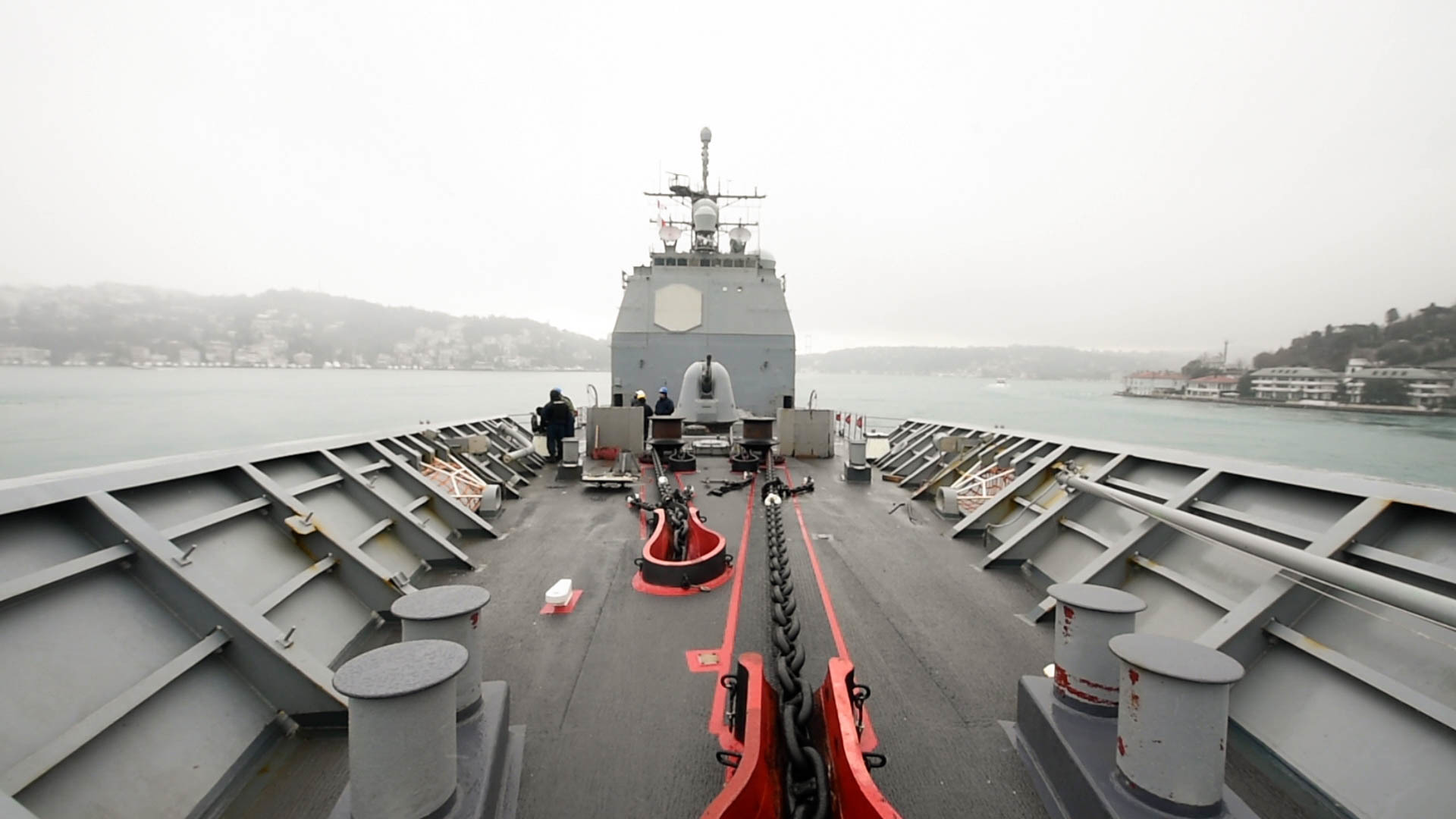 It may not be Silicon Valley’s speed, but it proved a crucial point that’s central to the Forge’s strategy: If everyone involved has the tools and information necessary to check your work while you do it, things go much faster when you start asking for permission to move forward.

“We were able to provide all of the [objective quality evidence] needed to get this authorized to be delivered to the ship,” Lemons said. “Because the people that were in line in that process to say, ‘Yes, you can deliver this,’ could see all the data underneath and knew exactly what we were doing.” And therein lies the secret to how the Forge believes it can overcome bureaucratic slow down.

Dave Smith, the Forge’s quality assurance director, called the idea a “data lake.” By and large, the various officials — from cybersecurity, safety, test and evaluation — who need to sign off on updates all need to look at the same data. If that data is stored and updated in real time in an environment where everyone can see it, then it drastically reduces the odds a major issue will pop up at the end.

The experiment on Monterey became known as the “Virtual Pilot Ship Increment I,” and was a crucial test case for the Forge for two reasons. The first is it proved the team’s theory about how to speed up the process through the “data lake” Smith described.

The second is that it was a chance to employ hardware and software capable of being used across a variety of ship classes. The software in use across the fleet today heavily relies on being able to connect to specific hardware processors. That makes updating it incredibly painful because Navy engineers are trying to solve future problems while limited to very specific and often outdated processing power.

The Forge aims to overcome that limitation by disconnecting a software’s requirements from any one piece of hardware.

If all this sounds very technical, here’s a shot of reality: Microsoft, Amazon, Apple and other tech giants figured this out a long time ago and the public enjoys better, easier-to-use technology today because they can receive virtually identical updates on any device. But warships have a lot more riding on them — literally and figuratively — than an iPhone or a personal computer.

The disconnect between hardware and software is a fundamental principle for building the Integrated Combat System.

So where does the Aegis Weapon System come into play? A virtual twin takes the source code that makes Aegis work and runs it on smaller, sleeker hardware than what was installed onboard Monterey decades ago. In other words, the ship maintains the capabilities of Aegis while also getting set up with infrastructure capable of receiving updates.

Biehn’s team had planned for “Virtual Pilot Ship Increment II,” but it fell through due to a lack of funding. Now, the captain argues the Forge has “outpaced the need” for it anyway. Since Monterey, the software factory has been able to use these virtual systems on Army programs as well as Navy unmanned surface vessels.

“Instead of a virtual pilot ship, we’re just doing the first virtualized Aegis weapon system on a destroyer by the end of this calendar year,” he said. “So, we kind of moved past that milestone and are on to actually delivering it to the fleet.” 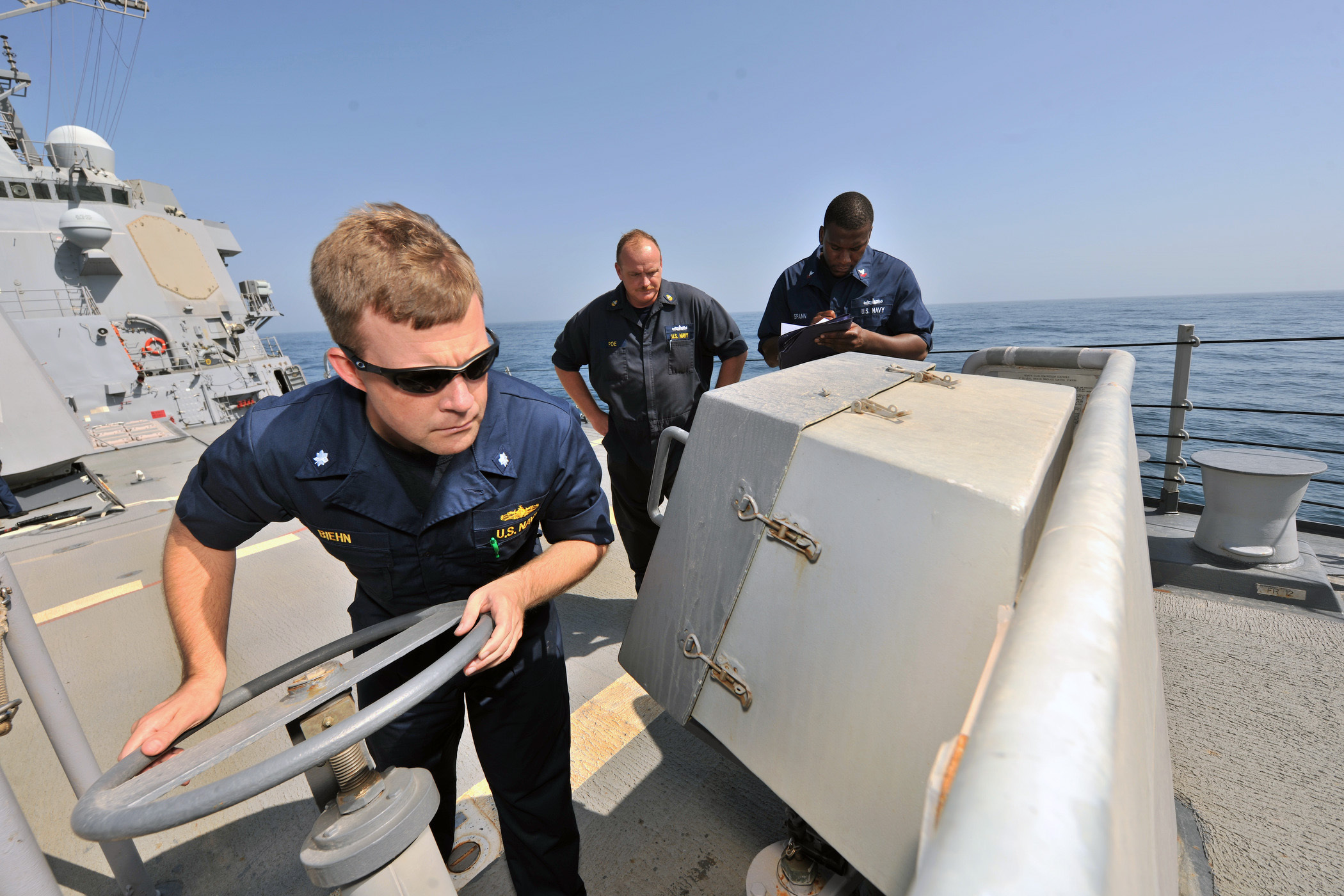 The VPS is only one experiment, though. During the briefing last week, Navy officials explained that the heart of the software factory is not just about pushing updates out, but also utilizing the data the fleet takes in.

In that vein, the Forge has been developing an “event reconstruction tool,” an asset the team will evaluate during the fleet exercises this year. While narrowly scoped in its specific use case, the event reconstruction application is one type of software that Navy engineers ashore would be able to deliver to the fleet rapidly through the infrastructure the Forge aims to deliver.

Biehn referenced his time as a senior officer on the destroyer Truxtun (DDG-103) while transiting the Black Sea to explain its purpose.

During one deployment, a Russian jet was persistently harassing Biehn’s ship. Normally, sailors must record a play-by-play of the events to provide to higher echelon commands moving forward. The process is as tedious and time-consuming as it sounds.

The Forge’s tool would pull data from the ship’s systems to create these records in real-time. In the short term, the tool spares sailors the trouble of doing it by hand. But more importantly, said Biehn, that data can be immediately accessed and used for a range of purposes unrelated to software development, such as operational decisions and training.

“You’re starting to see the Forge push out capability, I think at a pace that we’re comfortable with,” said Rear Adm. Seiko Okano, PEO IWS chief. “So, we’re gaining knowledge of … you did event reconstruction, what’s next?”

The end state goals of the Forge are aspirational. There is still much work to do before the surface fleet can boast the flexibility of Apple’s app store. Due to the Navy’s size, the expensive nature of any warship modernization and the safety concerns associated with changing a system as important as Aegis, the transformation the Forge seeks will take time.

But when Biehn’s team equips an operational destroyer with a virtual Aegis Weapon System later this year, he said, “That’s not all the way to the [Integrated Combat System]. It’s not even halfway to the ICS. But it’s an important foundational step for us.”