TEL AVIV: After a two week stretch that saw drones linked to Iran attack a ship in the Gulf of Oman, another tanker in the region suffer an attempted hijacking, and rockets fired towards Israel from Lebanon, the Israeli government has decided not to launch any major military actions against Iran or its proxies.

The decision towards restraint was made in order not to start a larger war with Hezbollah at a time when the US and Iran are in ongoing talks about a new nuclear agreement. Israeli government sources insist the decision not to militarily retaliate against Hezbollah or Iranian targets was made internally, and was not the result of pressure from Washington.

However, the Israeli restraint may be limited. “This situation is temporary, and the real Israeli action is only being delayed” an Israeli defense source told Breaking Defense.

Sources say that Israel has prepared a collection of targets in Lebanon, including critical infrastructure whose destruction is designed to put political pressure on Hezbollah, that could be quickly struck should the Iran-backed group launch a new series of rocket strikes into Israel. Recent estimates say that Hezbollah in Lebanon is armed with an arsenal of 140,000 rockets, of varying accuracies.

The situation in the region has become increasingly tense, with Iran acting out just as it swore in its new president, Ebrahim Raisi, viewed as a hardliner by Iranian experts.

On July 29, two unsuccessful unmanned aerial vehicle (UAV) strikes were reported against the commercial ship Mercer Street, with a third, successful strike killing two members — one British, one Romanian — of the crew on July 30. The US has formally attributed the attacks to Iran, part of a growing trend of Tehran using unmanned systems as strike weapons.

Then on Aug. 5, the crew of a tanker off the coast of Oman scuttled a hijacking attempt by what was described as a handful of Iranian nationals.

A day later, Hezbollah launched roughly 20 rockets from Lebanon towards Israel. The majority were intercepted by the Iron Dome system, and no Israeli citizens were hurt by the attacks.

The rocket launches are of particular concern for officials here, who worry about Iran’s potential to directly take over control of Lebanon’s government. Over the weekend, Israeli PM Naftali Bennett warned that Lebanon’s government would be held responsible for further attacks from within its territory.

Hasan Nasrallah, the head of Hezbollah, recently said that in light of the Lebanese government’s inability to resolve the country’s fuel crisis, Hezbollah has asked Iran to sell Lebanon gasoline and diesel. Those products “will soon arrive and be brought into Lebanon, whether by sea or land,” per a Hezbollah statement.

Experts here believe Iran is increasing its aggression as a result of Raisi’s rise to power. But they also warn that the hardliner may be overplaying his hand already.

In particular, the drone strike on the Mercer Street may have worked only to unify opposition to Tehran among the US and European governments that are currently looking for a way to resuscitate the Iran nuclear deal.

“This was a stupid act by Iran and the US has to take advantage of it and put heavier pressure on Teheran” retired Maj. Gen. Giora Eiland, a former head of the Israeli National Security Council, told Breaking Defense. 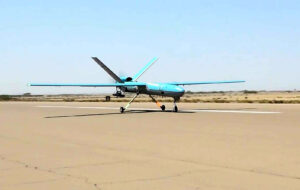 The Biden admin, Eiland said, is already concerned by Raisi’s rise to power. “Adding to that the attack on the ship should create a unified front lead by the US, that has to show a hard line in the nuclear talks with Iran.”

Mordechai Kedar, a senior expert on Middle Eastern issues, added that Israel’s decision to turn the Mercer Street attack into an international issue and to align Washington and Europe against it may have led directly to the Hezbollah strikes.

“When Teheran learned that Israel turned the attack into an international issue, it decided to order the Hezbollah to launch rockets into Israel to signal Jerusalem” that Israel has to deal with Hezbollah directly, and not count on an international coalition for political aid, Kedar said. “The situation is very tricky and may escalate into a much larger confrontation between Israel and the Hezbollah.”

Israel has intensified its intelligence effort in Iran following the recent attacks, with Defense Minister Benny Gantz claiming that Amir Ali Hajizadeh, Commander of the IRGC’s Air Force, is “directly responsible” for the suicide UAV strike.

The Israeli military has been sounding the alarm for several months that Iran seems poised to increase its use of military drones. Those concerns grew louder following a July statement from Islamic Revolution Guards Corps Commander Major General Hossein Salami, who announced that the country has developed UAV’s with a range of 7,000 km.

There are no solid proof, Israeli sources said, about the existence of an Iranian UAV with the 7,000 km range. (Israeli sources said that the Iranian Shahed 129 UAV has a max range of 2,000 km, with an endurance of 24 hours.) But since 2011, when an RQ-170 Sentinel UAV was captured by Iran, the country’s unmanned program has progressed significantly.

In early July, the US and Israel begun coordination efforts to prepare for the challenge of an increased number of UAVs that could come out of Tehran, as well as some of the missiles seen in the hands of Tehran’s proxies around the region.

Gantz has also recently claimed that Iran “is only about ten weeks away from reaching fissile material that will allow it to develop a nuclear bomb.” He said this in a security briefing he conducted with Foreign Minister Yair Lapid on the ambassadors of UN Security Council member states.

“Iran has crossed all the lines defined in the previous nuclear deal,” Gantz added.

Those comments come as Israel is pushing against any new Iran nuclear agreement. Israeli diplomats may soon present to Washington evidence that the ongoing talks between the US and Iran have actually provided cover for Tehran to speed up its nuclear weapons program.